Why did a Filipinx kid relate so much to the red-headed protagonist of a book meant for girls?

Electric Lit relies on contributions from our readers to help make literature more exciting, relevant, and inclusive. Please support our work by becoming a member today, or making a one-time donation here.

The following essay is adapted from C.E. Gatchalian’s memoir Double Melancholy: Art, Beauty, and the Making of a Brown Queer Man.

It was one noon hour in the school library, where I usually hid during my lunch breaks, that I—a little brown Filipinx boy who had just started feeling the first vague stirrings of queer desire—discovered L.M. Montgomery’s Anne of Green Gables. The library’s books, I remember, were alphabetized by title, so Anne was probably one of the first three or four books in the fiction section.

I connected instantly with the cover art for Anne: it was the famous 1942 edition with the young protagonist propped atop a heap of wood, enclosed in an oblong iris, which was in turn enclosed by rows of green and white abstractions that ably and efficiently suggested gables. I was drawn to Anne’s plaintive looks—all old-soul melancholy eyes. Her aching solitariness—underpinned by a bursting, indescribable sweetness—moved me, I remember, utterly.

That I was a boy reading a “book for girls” was not something that overly concerned me—at least, not enough to dissuade me from borrowing it. I probably did have a vague notion linking the liking of “girl” things with being a “sissy”: I remember being careful to read Anne only at home, and to never be seen reading or carrying it in school. But I also had enough chutzpah to be true to myself—I had no interest in G.I. Joe, or even boy-focused classic literature like Huckleberry Finn.

There are obvious reasons why a little brown queer boy would fall in love with Anne Shirley. Anne is an orphan and, consequently, like virtually every queer child, an outsider in every family she ends up with. With her red hair and freckles, she is, in her own way, racialized, given the still-present stigma against redheads in white society. She is a girl in a world that vastly prefers boys, shipped by mistake to a family expecting and wanting a boy. In the face of these challenges she strives, Herculean, towards unadulterated poetry, beauty, transcendence. This she achieves with her most unassailable attribute, her imagination, constructing a divine counterworld to the colonial conservatism of early-20th-century Prince Edward Island.

But even in the actual world, Anne—as her guardian Marilla would drily say—does well for herself. She transforms her fury at the world into a ferocious work ethic, leading to impressive academic and artistic achievements. She stands up to bullies who belittle her orphan status and red hair—can anyone resist cheering her epic takedown of the town busybody, Rachel Lynde? She’s a feminist who stands up to and runs with the boys; her response to Gilbert Blythe is particularly admirable. Rather than crumble like Spanish shortbread before his good looks, she refuses to forgive him for the wrong he does her—he calls her “Carrots”—fiercely repudiating his advances for most of the book. Above all, she magically transforms her weaknesses into strengths, appropriating the stigmatized categories of “orphan girl” and “redhead” for her own triumphant individuation.

And, of course, there are the queer-tinged characters and relationships in the book. Anne’s guardians, the elderly, unmarried brother-and-sister duumvirate of Matthew and Marilla, are qualified early in the book by Rachel Lynde as “a little odd.” Gruff, angular, no-nonsense Marilla is emotionally guarded and uncomfortable with physical affection (she is “disturbed” by the “unaccustomedness and sweetness” of Anne’s spontaneous caresses). Timid, taciturn Matthew is debilitatingly shy, especially around women, whom he dreads because of “an uncomfortable feeling that the mysterious creatures were secretly laughing at him.” And Anne’s “bosom” friendship with Diana is described in terms that are unambiguous and absolute in their devotion and passion. When Anne accidentally gets Diana drunk, and the latter’s mother forbids their friendship to continue, Anne resorts to language worthy of Tennyson: “Fare thee well, my beloved friend. Henceforth we must be as strangers though we are living side by side. But my heart will ever be faithful to thee.”

Anne Shirley is one maniacally determined individual. She fights for her rights with a ferocity that verges on the transgressive. She stridently strives to be “the best,” and eventually becomes it. Finally, after much struggle, she gains acceptance from the dominant culture, to the point where, as we progress through the six Anne books, we barely remember she’s a red-headed orphan. The jewel in her crown: eventual marriage, sexual fulfillment and child-breeding with hunky Gilbert, the imagined Prince Charming of adolescent females the world over.

Why is it surprising, then, that a little brown Filipinx boy with burgeoning queer desires and a profound wish to be white should find inspiration in Anne’s triumphal narrative?

The authors of “Marilla of Green Gables” and “Meg, Jo, Beth, and Amy” discuss the enduring influence of these classic heroines 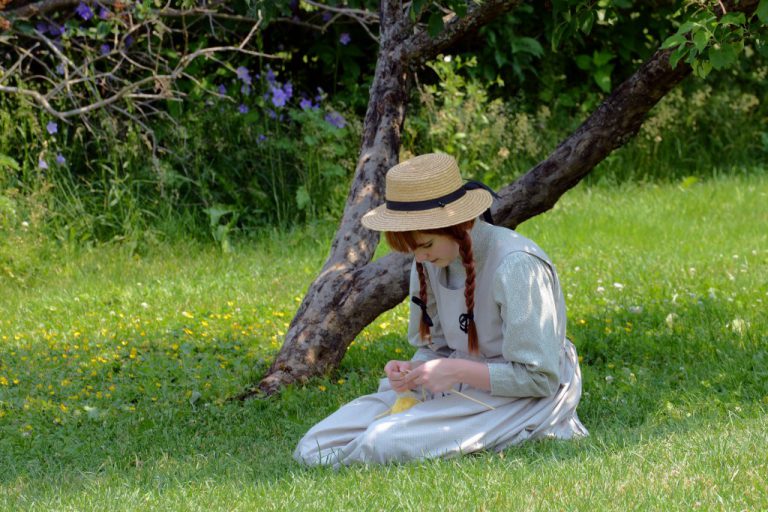 Growing up in Vancouver, Canada, as the child of immigrant parents from the Philippines, I was abnormally introverted, obsessive compulsive and anxious. Artsy and bookish, I had no interest in sports. I was scared of the outside world and spent most of my time in my room, consuming every artwork—high and low—I could get my hands on: books, music, films, TV shows; desperate, I now realize, for some reflection of myself, of concrete, tangible proof that I exist; that I matter. But, of course, there were no representations to be found of queer brown Filipinx boys, so I could only consume what was most accessible: artworks by, about and for white, mostly straight people. The implicit message transmitted to me by the easy accessibility and complete domination of white stories is that only white stories matter, and, by extension, only white lives matter. That, despite being a professional writer for over two decades, it’s been only the last few years that I’ve written explicitly about being brown and Filipinx, is evidence of how long I held on to the belief that the stories and lives of brown and Filipinx folks don’t matter. How could I have believed otherwise? Our lives had never, in my years growing up, been given the validation afforded by cultural representation.

But I needed something to empower me, something to help me survive; and Anne Shirley came along at just the right time. She offered solace and hope; she showed a way out. Perhaps, through smarts and hard work, I, too, could carve out space for myself in the world. And perhaps, I, too, despite my coarse black hair and brown skin, could make some (white) Prince Charming fall in love with me.

There was likely another, more basic reason behind my love for this book, although at the time I don’t think I was conscious of it. My body, I believe, carried trauma. Both the inherited trauma of being Filipinx—a population that has been systemically humiliated, subjugated and brutalized for centuries—and the trauma I’d just started experiencing as a queer boy, in the form of shunning, name-calling, bullying. Quite simply, Anne of Green Gables—with its feel-good narrative and its florid, purple prose—was a balm on my hypervigilant, traumatized being.

The famous 1985 CBC television adaptation of Anne premiered shortly after I finished reading the book. I was unhappy with the way the miniseries reordered a number of the novel’s scenes, and was disappointed that none of the actors spoke in British, or at least mid-Atlantic, accents (weren’t all Canadians supposed to sound sort of British in those days?). Overall, though, I was captivated. We recorded the film the two nights it aired, which allowed me to watch it virtually every day for the next year. I would talk about it incessantly to the few friends I had at school, and find ways to mention it in every writing assignment I could. (Whatever stigma was attached to a boy openly liking this movie my obsession for it easily overrode.) And I loudly proclaimed my crush on Megan Follows, who played Anne—not exactly a lie (less about wanting her than wanting to be her) but more a pushback against the accusations being leveled against me than an honest declaration of lust.

For there was another aspect of the film whose peculiar energies were most preoccupying me. The moment Jonathan Crombie as Gilbert first appeared on the screen, the tenor of the film changed. Until that point, the world of Anne was cozily familiar, full of women and all the colors, textures, and modes associated with matriarchy. The sudden inflow of young male energy—so foreign and exotic to my eleven-year-old self—made for something darker, more menacing, more exciting—so exciting that, sometimes, unbeknownst to my working mother (but known to my non-working Lola, who didn’t care, didn’t tell, and would write me sick notes to take to school the next morning), I’d cut class and stay home, just to watch the movie, again and again.

Once, around this time, my father took my mother and me out for lunch. In his car afterwards, my mother, sitting in the passenger seat while I was in the back, told him that she’d heard me yelling the name “Gilbert” in my sleep in a manner not generally considered normative for a prepubescent boy. My father screeched the car to a halt, swung abruptly around, and smacked me hard in the face.

I blocked this incident out of my mind as soon as it happened and never dwelled on it again.

I’ve never asked my mother why she chose to divulge this information. I know it was out of genuine, if misguided, concern. As for my father’s violence—even that I justified for the longest time: he’s a product of his times, a macho, conservative Filipinx. Who could blame him for genuinely thinking he could beat the queer out of his son? Most fathers then thought that. Many still do.

For all my faults, holding grudges isn’t one of them. My friends tell me repeatedly that I’m extremely forgiving.

Anne saved my life. She entered my life exactly when I needed her. Her strength lit a fire under the part of me that remained intact, even as obsessiveness and anxiety started colonizing my young being. In her determination and triumph, I found hope.

Three decades later, shortly after his premature death of a brain hemorrhage, I read that Jonathan Crombie was queer, and that he didn’t come out until his forties. At that moment, as I recalled the huge crush I had on him when I was a boy, an epiphanic shiver rushed up my spine. For how could Anne’s influence extend even here, the most private thoughts and fantasies of a queer brown boy born exactly 100 years after her creator was?

But perhaps this is the upside, the magic of melancholy. Melancholics, alienated from their own immediate milieux, can connect, comfort and speak to one another across vast expanses of space and time, in the most loving and revelatory of ways.

Loving Your Parents Is a Trap

"Model Boy," excerpted from the novel 'The History of Living Forever' by Jake Wolff

“The Little Engine That Could” Is a Capitalist Nightmare

As a stay-at-home dad I read this children's classic over and over, but I also felt shut out from its definition of success

Jenny Zhang Explains Why We Want to Be Baby

In Lydia Millet’s “A Children’s Bible,” the Kids Save the Parents from Apocalypse