Finding Community at a Queens Bodega

Amy Brill remembers growing up, and growing into a community, at the neighborhood bodega in Corona, Queens

Presenting the tenth installment of The Bodega Project, where authors from across New York reflect on their communities through that most relied-on and overlooked institution, the bodega. Read the introduction to the series here.

The walk to Tony’s, down Xenia Street in Corona, Queens, isn’t about the Pepsi or Doritos I say I need, or the milk or American cheese my mother sometimes sends me out for. The dim interior with its two crowded aisles, neon chip bags, array of snack cakes and obligatory slinking cat aren’t that compelling. It’s what’s going on outside that draws me. I can’t say what it’s like now, but in 1984, when I was fourteen and out on my own, that’s where the whole neighborhood hung out.

There were the girls — Lisa from The House, my best friend Claudia from next door, Mel and Michelle, Tracy whose mom made her eat cigarettes whenever she caught her smoking. But more enticing were the boys: John, Jay or his brother Ajay, Harold, Omar, Claudia’s older brother William. Without fail, some or all of them would be outside, flirting, talking a big game, sharing bags of Frito’s or playing box ball with a Spaldeen on the sidewalk nearby. The boys always wore tanktops and basketball shorts, were spotless and well-groomed. They always smelled like a mixture of cumin, garlic, onion, and deodorant soap: Safeguard, Shield, Irish Spring. Decades later, my husband, who was partly raised in Venezuela and partly in a Boston suburb, described that smell to me as “house.”

My parents, first- and second-generation Jewish-Americans, moved to the neighborhood in the early 1960s. They had only been married a few years. For them, the chance to rent an apartment with an eat-in kitchen, separate dining room, and terrace, was a definite step up from the crowded tenements of Crown Heights and the South Bronx where they’d grown up. We had to take the bus to get to the subway from our third floor walk-up, but at least we had our own bedrooms.

Every so often, when our parents were out, my brother and I would hook up a ladder and shimmy out through a panel blocking the skylight in the hallway outside our door. From there we’d emerge onto the roof, our sloping street stretching off in either direction, lined with other mother-daughter houses like ours, some in rough shape and others meticulously kept. The DiDonato’s place, Francine’s, the Museum (our name for the cement yard filled with plaster statuary, including cherubs, cavorting goddesses, and an actual bubbling fountain). A few doors down was The House, a multistory building beside the long driveway where my parents parked our car, that housed a swirling universe of cousins from the Dominican Republic who’d drop in and out of town every summer. Claudia and her brothers William and Oscar lived right beside us, one floor down. A ten-minute walk east brought you to Flushing Meadows Park, with its iconic unisphere and weedy lakes. Much closer was the Long Island Expressway, the whoosh of its cars backgrounding our days and nights.

Our street was never quiet, but in the summer the volume exploded from car radios and boomboxes, most of the music and conversation in Spanish or Spanglish, or a mix of the two. Si, si, voy a la bodega, pero I don’t know if it be open. Mi hermano esta buscando el parking. The neighborhood was dominated by Puerto Rican, Colombian, Ecuadorian, Mexican, Cuban, and Dominican families — especially Dominican. The beat of our childhood was to salsa, rumba, and merengue, punctuated by The Sugarhill Gang and Grandmaster Flash. There were salsa parties in basement rec rooms of nearby apartment houses — tables swooning under platters of arroz con pollo, black beans, and buñuelos — where everyone danced. Those sweaty, joyous events were as far from a bat mitzvah at a Great Neck social hall as I can imagine.

It was with the people that hung out at Tony’s that I experienced all the firsts of young womanhood. My first couple’s dance (salsa, with Manny from The House). First kiss (Harold, in Claudia’s closet, playing Seven Minutes in Heaven). First unwanted kiss (during a tickle fight with Omar, who was more my brother’s friend). First time I purposely struck anyone besides my brother (Omar, elbow to the jaw, ending said kiss). First fair-weather friend… First friend-in-need…

Like every kid in history I just wanted to blend in, but of course there were limits. I was a white girl in a predominantly Latino neighborhood, dubbed la blancita by a sweetheart named Juan whom I dated one summer. Nobody hassled me beyond a complete mystification about the fact that we didn’t celebrate Christmas, but I felt my difference. My father was a lawyer. We spoke English at home. We were Jewish. On the 4th of July, our family would escape the neighborhood in favor of the beach, driving back slowly after dark, the borough transformed into a warlike maze of flash and sulfur, spent firecracker paper drifting in the streets. Tony’s would stay open at least until midnight, supplying the neighborhood crowd with forties and rolling papers, Mexican soda and a place to meet.

Even if I wasn’t a hundred percent at home in front of my home bodega, that didn’t stop me from trying. For a brief period in middle school I made the ill-advised move of adopting an accent that sounded like my friends from the neighborhood. I only got as far as Claudia’s apartment. Immediately she’d narrowed her eyes: Why you talking like that? I tried to play it off — Like what? — but I knew she was on to me. I quickly stopped trying, thankfully before I got my ass kicked by someone I hadn’t grown up with.

My parents moved out of Corona in 1993, right after I graduated from college. I’m not in touch with anyone from the old neighborhood now — I didn’t see them much in the years I spent at university upstate. I don’t really sound like I’m from Corona; in fact, I hardly even sound like a New Yorker. Although I drive right past my old block probably once a week on the way to my mom’s apartment, I never get off the highway. Our old building is apparently a condo now, which I only know because I looked it up on Zillow. I doubt I would recognize anyone in the neighborhood now if I bothered to drive by.

Where I live in Brooklyn the houses cost well over a million dollars, although it wasn’t like that when I moved here in 1996. One of the first things I loved back then was how much the bodegas on Smith Street reminded me of Tony’s. Even after I started eating organic, and joined the Park Slope Food Co-op, I’d go out of my way to visit the ones that still felt old school. I relished being able to slide my money across the counter and say How’s it going? in my old voice, the way I used to. The way I would at Tony’s.

The internet coughs up photos of what Tony’s looks like today. The first thing I notice is that the awning now says “Luciano Grocery” — or maybe that was always there and I just don’t remember it. Either way, you’ll still find it listed as Tony’s Deli, the name the neighborhood knew it by, if you search for it online. Thankfully or not, nothing much else has changed. Unlike other bodegas in more gentrified parts of New York, there are no twelve-dollar wedges of cheese here, no kimchi, no cans of craft beer, no kale chips. The merchandise looks to be the same old, same old, just as I remember: Hostess, Delicias, Suavitel, Harina Pan, “Dominican Cake.” I don’t buy any of that stuff anymore (if I’m being honest, I’m more likely to get the kale chips).

Paying Homage to the Kings of Fulton in Brooklyn

In the face of white gentrification in Ocean Hill, t’ai freedom ford makes sense of the bodegas that betray us and those that sustain us 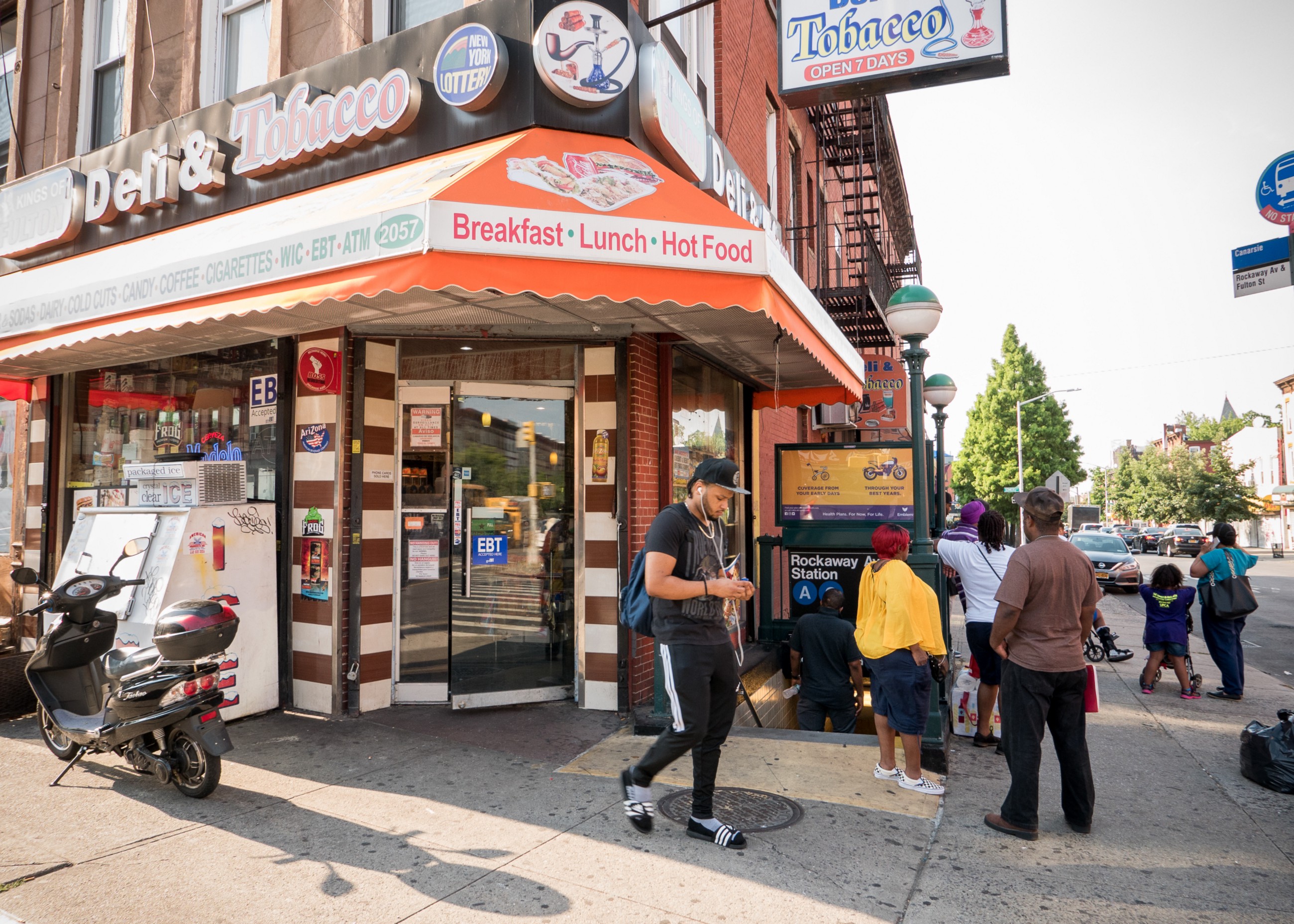 The bodega I go to these days sits diagonally across the street from the apartment I rent in a leafy part of Brooklyn with my husband and two kids. It’s run by one of the nicest guys I’ve ever met, a Palestinian named Sam with whom I talk about parenting, Toyota SUVs, and the similarities between Arabic and Hebrew. He keeps an array of sweets on the counter, an impressive muffin shelf, and a sign proclaiming WE NOW HAVE LOX! in excited block letters. Sam and his brothers know us; Sam always asks about my mom’s health, and during the holidays he treats my girls to gingerbread. With my husband, Sam talks soccer, until I stick my head out the door wondering what happened to him and the ice cream or beer he stepped out for.

I probably won’t ever go back to Tony’s, although I’ve swooped around it in Google Maps. I know that some of the old crew went on to college, moved away, moved on. Others didn’t fare as well. It’s garden-variety nostalgia, I guess. But whenever I click around the old neighborhood, it feels deeper. I become unexpectedly swamped with sorrow. Not for the architecture, or our old apartment, or the street, or even the bodega itself. I think it’s for that girl on the brink of womanhood, the version I left behind. The girl who would venture to Tony’s all by herself, who danced there with a boy for the first time, who sometimes stood out on warm summer nights smoking and flirting. The girl whose roots are still buried there, if they were even hers to begin with.

Amy Brill’s short stories and essays have appeared in One Story, The Common, Redbook, Real Simple, Guernica and the anthologies Stories from New York, Before and After, and Labor Day. She has been awarded a 2015 New York Foundation for the Arts fellowship in fiction, and a Peabody Award in documentary writing. Her debut novel, The Movement of Stars, was published in 2013.

The Bodega Project is supported by a grant from the New York City Department of Cultural Affairs.

We Keep Going Back to Where They Died

It’s Time Nancy Hale Got Her Due

Lauren Groff recommends "The Bubble" from the new collection by the 10-time O. Henry Award winner

J. Robert Lennon on what happens when urban artists move upstate into a murder house