Andrey Kurkov, author of the novel "Grey Bees," on remaining in Ukraine and how the forgotten war has escalated and is now known all over the world

Andrey Kurkov’s novel Grey Bees takes place in eastern Ukraine, a region that has been at war with Russian separatists since 2014. Translated by Boris Dralyuk, the story follows Sergey Sergeyich, a beekeeper living in what is called the “grey zone,” the liminal space between the warring sides. Sergeyich’s village is all but abandoned except for himself and his frenemy neighbor, Pashka—their electricity is cut and the mail arrives when it arrives. Each day brings obstacles in survival: shoveling coal for a furnace, burying a body of an unclaimed fallen soldier in the snow. What was once a lively town is now silent save the sounds of shelling—sometimes in the distance, sometimes too near.

Motivated to save his bees and harvest honey in warmer climes, Sergeyich makes the decision to venture out of the grey zone, loading up his Lada and trailer in tow and sets off onto an adventure-filled meditation on family, friendship, mortality, belonging and most of all: home.

I had the pleasure of corresponding with Kurkov to discuss his novel, who has remained in Ukraine during the war and its escalation by Russian forces throughout the country.

Kalani Pickhart: It feels impossible asking this question, but how are you? You and your family have had to move a number of times during this invasion. Would you be able to tell us where you are writing from and what your environment is like (even in non-specific terms)?

Andrey Kurkov: I am in the west of Ukraine, I can see Carpathian Mountains and that view is great. I would enjoy it much more if there were no war now, But we are lucky. In the end, a retired lady gave us her small flat and moved herself to her daughter. So we are fine. There is no desk, but there is a small kitchen table which I use. It is sometimes too noisy in kitchen, but I can write there. And I can have tea as often as I want.

KP: What provoked or inspired you to write a novel about the war in Donbas?

A Literary Guide to Understanding Ukraine, Past and Present

Books about the fight for Ukrainian democracy 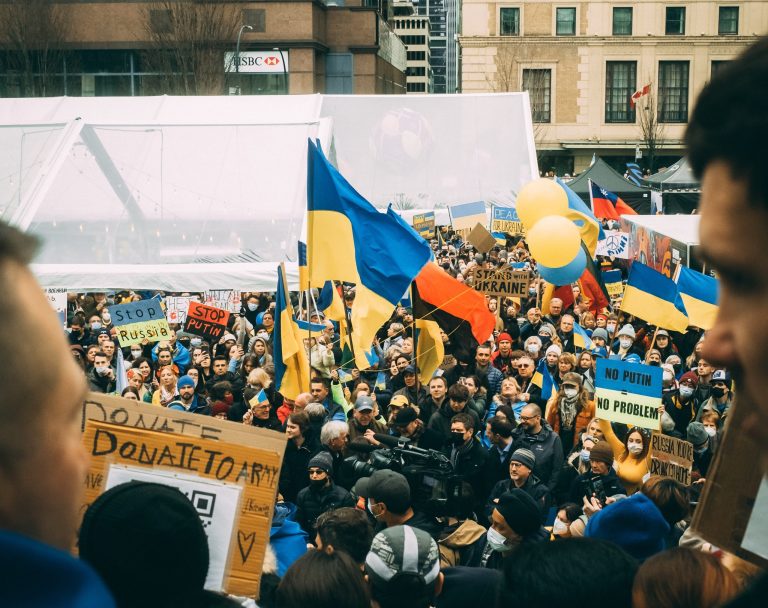 AK: From 2014, I started meeting a lot of resettlers and refugees from Donbas. One of them who the opened a cafe in Kyiv, told me he drives back once a month to bring medicine to an almost-abandoned village near the front line where only seven families remained. They were thanking him with pickles and whatever they grow. They lived without electricity, gas, shops, post. This was a moment I realized that life in the grey zone is going on and is the same length as the frontline. Back then it was 430 km. I wanted to give voice to these forgotten people.

KP: Are you able to write at the moment? I’ve read articles and seen interviews of you recently speaking about the war—are you focusing on reportage, or are you also working in fiction?

AK: Before the start of the war, I was working on a new novel about the events in Kyiv during the civil war in 1919. But as soon as the war started, I could no longer write literature. Since February 24, I have been writing only essays, diaries, articles about the situation in Ukraine, about the war, about Russian politics, and the history of Russian-Ukrainian relations.

I would very much like to return to my new novel, but I am afraid that, before the end of the war, this is not possible. Reality is now defeating any fiction with its predictable cruelty. What I have long known about today’s Russia is now known all over the world. Now it is more appropriate to engage in journalism or even philosophy than fiction.

KP: I read Grey Bees only a few weeks ago, shortly before the full-frontal invasion from Russia. I’d read about Ukrainian citizens who had stayed in the Donetsk and Luhansk areas despite the war, but Grey Bees allows the reader to access the “grey area” in a personal way. I was deeply moved by Sergey Sergeich’s story—what drew you to write this story of a beekeeper in Donbas? Why bees?

AK: Majority inhabitants of Donbas are like bees. They work all their life and don’t demand anything. They just live and do what is expected from them. My characters are also like that. Simple people who are trying to follow more laws of nature than laws of state. Sergeich is attached to his bees because he believes the bees are wise and they organized their communal collective life much better than the soviets in the USSR. He is simple but honest and in fact, it is the bees who are in a way looking after him, taking him out of the danger zone, not him looking after bees.

KP: I hope you don’t mind another bee question. At one point in the novel, Sergeich muses about the drone bees:

“Some bees fly, gather pollen, build honeycombs—live like the proletariat from day to day, from birth to death. Drones, meanwhile, just consume and consume. Can a worker bee ever really respect a drone? No.”

I am curious who, if anyone, Sergeich would see as “drones” in human civilization? Because he admires the wisdom of bees, is there a purpose for drones, both bees and humans?

AK: Drones fulfill their role in hives and can be considered useful, although they are despised by ordinary worker bees. Sergeich knows this. Drones among people cause only indignation and protest. For Sergeich, such human drones are, of course, the oligarchs, but above all, any “useless” person who does not produce anything from material or non-material values. In some ways, he also considers Pashka a drone, because he, although retired, does nothing useful. He just passively lives his useless life.

KP: A drone bee dies at Sergei’s feet, already a gray color from being starved. Sergei Sergeich translates to “grey” and he lives in a region that is called the “grey zone” because of the war. I would love to hear from you on this emphasis of grey or “greyness” and color (or the absence of it) in the book.

AK: Gray on a gray background is inconspicuous. And that means protected. Such is the psychology of many people of Donbas. They do not want to stand out from the crowd because it is dangerous. It is dangerous when they see that you are different from others. In Donbas, indeed, people rarely painted the fences of their houses in bright colors. This was too risky, too foolhardy. Therefore, the dullness of an urban or rural landscape only intensified the dullness of life and created a dullness of thought. After all, thoughts can also be bright and bold, or gray and boring. Despite this mediocrity, many residents of Donbas always managed to maintain a sense of justice, to maintain their positive moral qualities. It was all in the past. Now even the gray in the Donbas has become black because of the fire of war, because of explosions and fires.

KP: Grey Bees is what many would consider a “quiet” novel in the sense that there aren’t flashy action scenes—this may surprise some readers, considering the novel takes place in a war zone. That being said, there is a lot of tension and this high-frequency feeling of something dangerous might befall Sergeich—nearby bombs and shelling, a missing grenade, strangers at the door, intruders at a camp, a search at a checkpoint, a room with Russian police. This book lingers in the details, and every detail bears significant power. I wonder if you might be able to speak to your decision to write a novel about war in this way?

AK: Of course it was done on purpose. I did not want to write a novel filled with actions,  because military actions are not helping to explain human story, human tragedy. I wanted Sergeich to think about his life and himself, not about the war and explosions. This is about what war brings to ordinary people. And this point is more relevant today during full scale Russian aggression than when I published it first.

KP: As the war continues, are you planning to stay in Ukraine?

AP: I am staying in Ukraine with my wife and two sons—they are all U.K. citizens but they don’t want to leave either. My wife moved to Kyiv in 1988 when I refused to settle in the U.K. The boys grew up in Kyiv and cannot imagine living outside Ukraine. Ukraine is their home.

KP: Many people who were unaware or uninterested in the war in Donbas are now seeing the atrocities throughout Ukraine and want to learn and support Ukrainian writers, journalists, NGOs, and refugees. There are protests around the world and Ukrainian flags are being flown by Ukrainians and non-Ukrainians alike. I have my own complicated feelings, but I wonder how are you feeling and what your thoughts are about this sudden shift in international interest?

AK: Of course, support for Ukraine around the world has grown to an unprecedented scale. This is very pleasing. It’s just a pity that Europe didn’t see before what the Russian policy towards Ukraine is leading to. Europe has been surprisingly naive and sometimes too pragmatic, like Germany. Europe wanted to trade with Russia and turned a blind eye to human rights problems, Europe did not want to notice the trends in Russian politics that led today to total war in Ukraine. Now, before our eyes, a war of the 20th century is being waged with the bombing of cities and villages, with the destruction of the civilian population. And this is happening in the 21st century! Why? Because Putin lives in the past. He wants to restore the USSR and wants the whole world to be afraid of the new Soviet Union. The world is truly afraid. Only Ukraine is not afraid to fight the Russian army, which is several times larger than the Ukrainian one. Because Ukraine knows that it can lose its independence, its statehood, it can disappear from the map of the world. What will happen to the rest of the world then? I’m scared to imagine it.

14 Books About Nature by Women Writers

“No One Cares About Africans”

A Literary Guide to Understanding Ukraine, Past and Present

Books about the fight for Ukrainian democracy

Who Will Bury Me if I Die in a Foreign Land