It’s Time To Reinvent the Trope of the Monster Husband

How does the story go? Human man walks into a strange home. Human man gets into trouble with the owner of said home, a monstrous creature with claws, fangs, and fur covering his entire body. Monster makes a deal, bartering the human man’s freedom in exchange for his beautiful human daughter. Human girl, though she is not happy about it, agrees. However after living with said monster,  human girl begins to “look” beyond said monster’s appearance and falls for his inner qualities. Human girl’s love for the monster transforms him into a respectable-looking human man. Human girl and monster-turned-man live happily ever after.

Written by French novelist Gabrielle-Suzanne Barbot de Villeneuve, La Belle et la Bête, or Beauty and the Beast tells the story of a beautiful maiden who becomes engaged to a monster as the result of her father’s debts. While the original French fairy tale may have been written in the 18th century, stories of the paranormal romance, often between a human woman and a supernatural male partner, happen to be tales as old as time.

Around the world, tales of animal bridegrooms, or stories of human women betrothed or married to animal-esque figures, proliferate folklore. Examples of this include “The Snake Prince,” “East of the Sun and West of the Moon,” “Marya Morevna and Koschei the Deathless,” and more. Though monster husband stories have shifted, evolving as time has moved on, the trope has continually carried deeper messaging. Socio-political implications abound in every iteration of the monster-husband trope, especially those related to power and gender roles.

Many scholars theorize that women who were forced into arranged marriages to men they were not familiar with (for instance Gabrielle-Suzanne Barbot de Villeneuve’s La Belle et la Bête) often conceptualized their future husbands as ominous figures. In these circumstances, animal bridegroom stories may have offered a balm for these fearful brides-to-be, fictionalizing their very real fears and anxieties. As film critic and video essayist Lindsay Ellis commented, “Many an arranged marriage must have seemed like being tethered to a monster…and the telling of stories like ‘Beauty and the Beast’ may have furnished women with a socially acceptable channel for providing advice, comfort, and the consolation of imagination.”

As such, the monster husband trope in this era runs in tandem to more polarized customs of patriarchal control, in which female partners were sometimes considered hostages to the whelms of wealthy men. 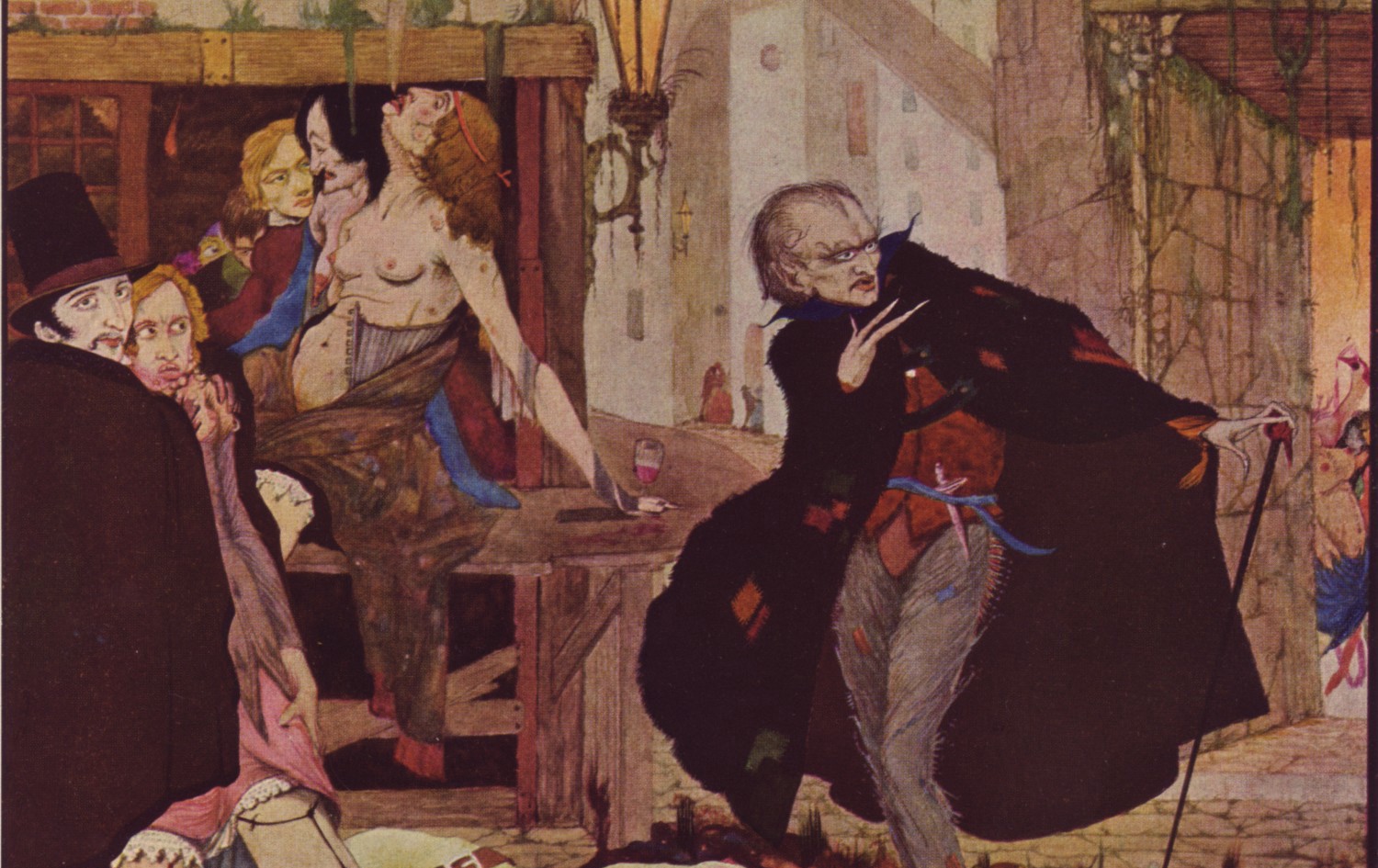 And like many classic fairy tales, stories of the monster husband were also taught to carry implicit instructions on gendered behavior and romantic protocol.

As seen in early versions of Beauty and the Beast, Belle’s self-sacrifice, loveliness, and well-mannered grace (all highly treasured “feminine” qualities) were crucial in unlocking the Beast’s potential as a conventionally attractive and appropriate spouse. Her delicate femininity ultimately provided for emotional and financial security.

You can almost hear the unspoken parable: behave as a woman should and the beast can be tamed into a proper man. It should be noted that this lesson continues to be a fixture within modern-day media.Women often expect, or are expected, to tame their more problematic male partner, while men are rarely asked to take responsibility for their emotions and behaviors.

While many heroic narratives, such as Joseph Campbell Hero’s Journey Structure, are often reserved for men venturing outward into the world, classic female narratives often turn the critical gaze inward, towards the realm of intimate relationships. The implication is that even among the limited roles women occupy in society, their power lies in their ability to change their partners for the better, to heal them through the power of love. Belle demonstrates this when the Beast’s curse is removed after his evolution as a man, all of which results, first and foremost, from her affection.

And yet the fairy tale idea of redemptive love also becomes a potential trap for an emotionally frustrating, if not abusive, relationship.

Take a modern example of the bad boy monster in television: Cole Turner from the original version of Charmed (1998- 2006). Though Edward and Cole’s monstrosity is not so obvious on the surface, their supernatural abilities—and potential for monstrous destruction, including their ability to literally destroy their partners—make them monstrous. Cole is the literal handsome devil who loves Phoebe (incidentally a witch and not a totally powerless human). She is perpetually tasked with trying to save him from succumbing to his fate: becoming The Source of All Evil, or ruler of the demon world. At first Phoebe believes it is possible to prevent Cole from descending into darkness through the power of her love. However, romantic love—as it does in real life—proves not to be enough.

Their relationship in the show mimics many real-life domestic abuse dynamics, in which Cole attempts to keep Phoebe hostage as his dark queen through distancing her from her family, continually lying to her and manipulating her in hopes of making her stay with him. In a sense, this inverts the early monster husband example, in which the monstrosity in not his appearance—or even his demon heritage—but his own cruelty as a romantic partner.

However, not everything monstrous is evil or awful in nature.

Many are drawn to monsters for the way they embody or represent the outsider figure within society, the one who is feared yet still yearns for love.

Within the monster, there is the appeal of the liminal, of finding sadness and loneliness in those cast upon the margins. Whether due to their appearance or their abilities, some women, and those of other marginalized identities, have found empathy in their monstrous partners, allowing them to see and embrace their own particular humanity.

In an interview with Guillermo del Toro, the director of The Shape of Water (a story about a human woman falling in love with someone whose appearance was inspired by The Creature From the Black Lagoon) he states, “I feel it as an immigrant that has been received by this country, but I still feel there is sort of the demonization of ‘the other’ very present. I needed to talk about the beauty of ‘the other.” It should be pointed out that The Shape of Water has its own issues with representing the “other” in its ableism as other disabled writers and activists have noted.)

Then there are those who, being themselves marginalized in other ways, whether relating to race, disability, or queerness, have mirrored their own experiences of “outsidership” in the monsters they’ve birthed. Many theorize that Howard Ashman, the legendary gay, Jewish Disney songwriter, attributed to “giving a beast his soul,” reflected the cruelty and prejudice experienced by AIDS patients in the treatment of the Beast. As the lyrics in the “The Mob Song” goes, “We don’t like what we don’t / Understand and in fact it scares us / And this monster is mysterious at least,” villagers sing as they march toward Beast’s castle.

(On a related note, it might be telling how so many of Disney’s “villains,” long theorized to have elements of queer-coding, were actually designed by a gay animator, Andreas Deja.)

There is also the dissonance in the contrast between appearance and reality. The monster’s outside underbellies a sensual magnetism, a genuine tenderness for their partner, in turn met by personal agency from their human lovers who confront the strange and unusual with empathy and kindness.

The monster presents a fantasy that embodies a type of masculinity separate from the patriarchal violence of flesh-and-blood men. “Though it may be masculine (in some cases), the monster is not human, and the problem of humanity eliding with the male is circumvented” (p. 9)

In other modern examples of the monster husband, the eventual transformation is physical, as it is in Beauty and the Beast. Rather their monstrous physicality  is accepted. No transformation is needed, as seen in The Shape of Water or the titular green ogre love interest of Shrek.

The monster husband today is less someone to be feared than someone to be known, to be seen and acknowledged as a multifaceted person with vulnerabilities, strengths, and the whole range of emotions, just like any other human being. And while the monster husband’s monstrosity in original mythology and storytelling was marked by an external beastliness, by today’s standards of creative social consciousness, the link between appearance and perceived morality has shifted in recognizing that those who look conventionally attractive, like Prince Charming or Gaston LeGume, (the antagonist of Disney’s Beauty and the Beast) may be more capable of actual villainy or evil than the stigmatized monster husbands themselves.

What’s more, the monster husband continues to shift, physically, in favor of greater diversity. While many monster husbands are still marked by fur, feathers, scales, and the like, modern authors and filmmakers are playing with visual markers, from the beautiful aquatic masculinity of Vladimir Chebotaryov and Gennadi Kazansky’s  1962 film, Amphibian Man (Russian: Человек-амфибия), to the glittery vampires of Stephanie Meyer’s Twilight.

As the movement of feminine rage and agency continues within modern pop culture and politics, we’re seeing more appearances of the monster wife. Books like Squad by Maggie Tokuda-Hall and the Gumiho series by Kat Cho, show us female characters gaining supernatural strength, and adopting the ferocity that monster husbands have long demonstrated.

Hopefully as more writers continue to explore this dynamic, there will be more stories to reinvent it, perhaps further queering it, as well as giving more opportunities for the feminine monster to shine.

Alison B. Hart, author of "The Work Wife," recommends stories of employees who pick up (and know all about) their bosses's dirty laundry

In Real Life Arranged Marriage is No Joke

Devi S. Laskar considers the love and luck in her family’s legacy of arranged marriages

I Blamed Mac Miller for My Failed Interracial Relationship

Then I found healing in his lyrics

My Menial Job at the Anti-Fuck Factory

"The Raised Blade," an excerpt from Toad by Katherine Dunn, recommended by Naomi Huffman