AN INTRODUCTION BY DANIELLE DUTTON

The various stories of Joanna Walsh’s Vertigo — some of them extremely short, others longer, some in first person, others not — are linked not by any obvious linear narrative but by a powerful narrative consciousness — a woman, an I, a pair of eyes — that looks out at the world with a lucidity so intense that it can make her (and us) dizzy. There are other connections, or themes — travel; a divorce underway, or looming, or done; children growing or grown — but what binds the pieces together is this way of seeing and making sense of what’s seen.

Perhaps unsurprisingly, Walsh is also an illustrator; you can view some of her wonderful walking maps of London at The Guardian website. These maps offer a distinctly individual experience of a place — funny observations on passersby get folded in alongside historical facts, menu suggestions, political insights, fashion — and somehow her stories feel like this as well: intensely visual, hilarious at the most unexpected moments, dense with awareness and life.

In this story, “Online,” which comes almost halfway through the book, we seem to discover something important about our protagonist’s life, some information we might have been missing up to now. But I think it would be a mistake to try to puzzle out a plot that remains always slightly submerged in Vertigo. What matters is the particular way Walsh transforms the world with words, and how this transformation happens anew in every moment, so that “experience,” in her writing, is not a destination we arrive at, but a present we never leave. 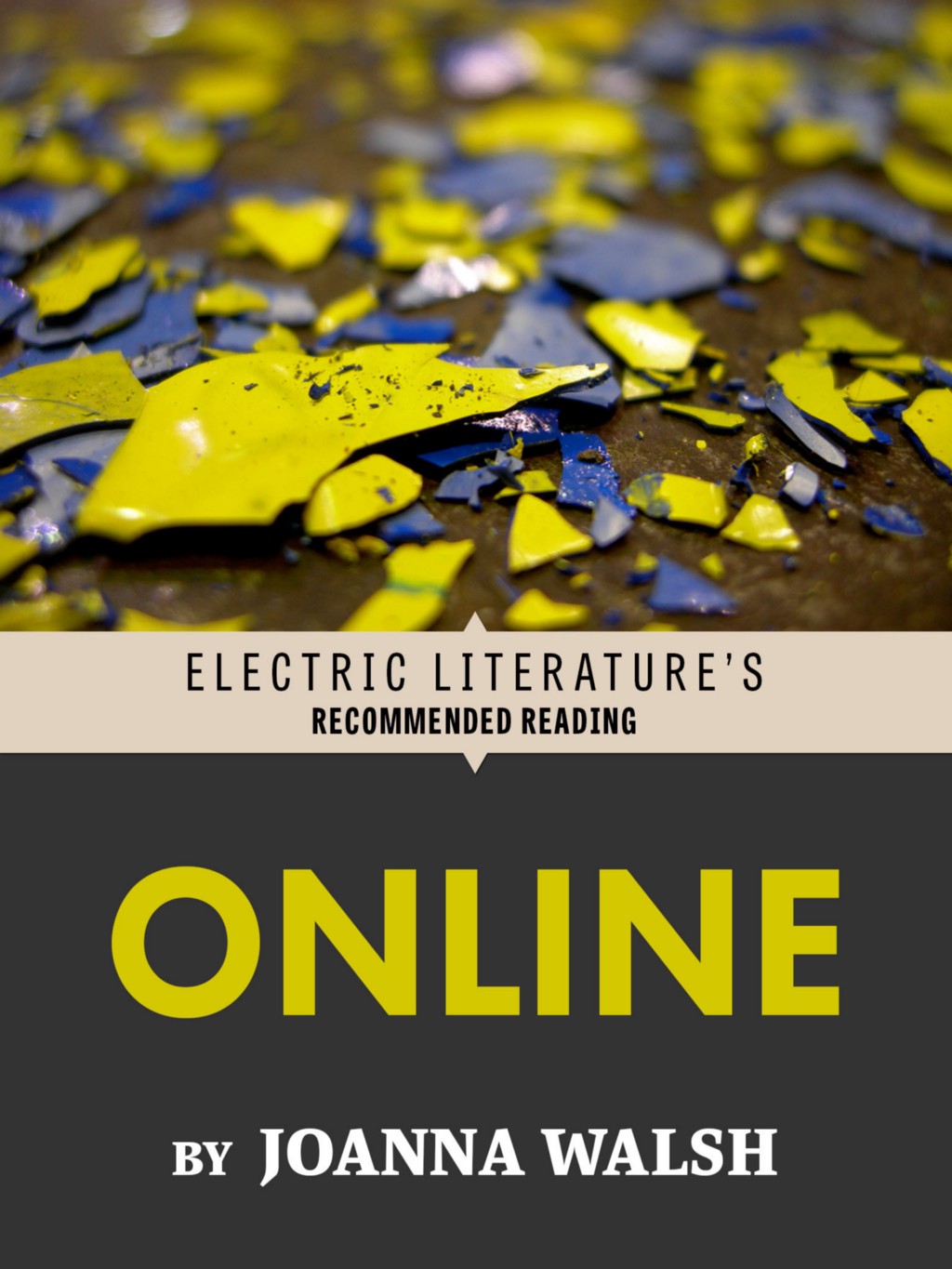 My husband met some women online and I found out.

I had neglected my husband.

Now I wanted him back.

So I tried to be as witty and charming as the women my husband had met online.

I tried to take an interest.

At breakfast, I said to him, “How is your breakfast?”

I said to him, “What do you like for breakfast?”

He did not answer my question.

So I tried to take an interest in what my husband was doing. I asked him, “What are you going to do today?”

He said, “I will strip old paint from the shed.”

(I already knew he planned to do this. But, again, that is where the women online have the advantage.)

He did not respond to my jokey sexual innuendo.

Instead, my husband went outside to strip paint from the shed.

When he had gone I thought:

His women are the sum of all their qualities, not several but complete, massive, many-breasted, many-legged, multifaceted, and I participate in these women. Some of his women have been chosen because they are a bit like me, some because they are unlike. He likes them. And he likes me. He likes me for being both unlike but like them. He likes them for being both like and unlike me. If I met them, I know I would like them, most of them, as we are all a little alike. Or at least I would not dislike them for being like, but unlike, me, and for him liking them not better but — although, and because, they are different — exactly the same amount as he likes me. We are all trapped behind the same glass. He can make us spin for his amusement and turn us to view any side. He is greater than the sum of our parts, though each part of them competes with me: their qualifications, and their legs, and their hairdos, and their cup sizes. And I compete with them, and some of my parts even outshine some of theirs, which are occasionally mediocre. But I cannot outshine them when they are added together.

After some time I went outside into the garden where my husband was stripping paint from the shed, and said,

In the evenings, my husband listens to old vinyl. My husband says to his women, “I like old vinyl,” and so they listen to some old vinyl for him.

“You remind me of Debbie Harry,” he tells one of his women, “and you look like Belinda Carlisle. You make me think of Debbi Peterson (from The Bangles), and you look like Dale Bozzio.” My husband has a line and he follows it.

The line is flat. It is a line of enclosed screaming women. They are stretched into an eternity of dental floss you could wrap round the world a thousand times. It’s not their breasts I can’t cope with, nor their qualifications. It’s not their Debbie Harry legs, their Dale Bozzio voices, it’s the way they multiply, each by each other, exponentially: it’s the digits.

My husband is a god, many headed.

Because he has multiple women, he may have multiple aspects.

I want the same thing.

So I have practiced myself by writing to him, although we live together.

I have somehow assembled some words that, when seen through a glass screen, might look something like it could begin to be somebody. Now that I can read over what I might be, I think I know which parts are me and which belong to my husband’s other women. I have become, perhaps, almost one complete person who could, perhaps, have a conversation.

And if I were to use these words to write to my husband while he, simultaneously, communicated with his other women, or while I communicated with other men, would the words we said to each other lose meaning, or would this render what he says to them just more of what he says to me, and what I say to them just more of what I say to him?

Are there only two sides of the glass to be on? And if I were able to skip over to the other side, would the view back look like old vinyl, his women, their voices trapped on a flat plane, damaged, heard underwater?

I think all this while standing in the doorway of our house, looking out into the garden at my husband stripping paint from the shed.

I say to him, “Are you having a good strip?”

And he ignores my lame joke, so I say,

We’re All Faking It For Social Media

Emma Cline, author of "Daddy," on how the bad guys never think of themselves as bad

What Anaïs Nin Can Teach Us About Online Dating

Tinder may be new, but the problems of dating are old enough that we can turn to 1930s erotica for their solutions

The Art of Looking into the Near Future

Talking with Courtney Maum about predicting trends, encroaching tech and romantic relationships in the age of AI