Susanna Clarke's book about a vast, elaborate magical prison could not have come at a better time

In 1742, the Italian engraver Giovanni Battista Piranesi fell ill. Malaria, a seasonal epidemic that killed thousands of Italians every year until the middle of the 20th century, afflicts sufferers with high fever, chills, and pounding headaches, among other nasty symptoms. Delirious with fever, the 22-year-old aspiring architect hallucinated prisons.

When he recovered, instead of doing his best to forget about the nightmarish dungeons he’d imagined while he was sick, Piranesi set them to copper plates and had them published. The Carceri d’Invenzione (imaginary prisons), first sold as a set of fourteen prints, were a flop, especially compared to the images of Roman ruins Piranesi would make later in his career. But the sinister, unique and inscrutable prisons, though unpopular during Piranesi’s lifetime, later became the darling subject of moody writers and critics. Piranesi’s goth genius was like catnip for Herman Melville and Victor Hugo. Marguerite Yourcenar, the novelist and member of the French Academy, borrowed Hugo’s description of the engraver for the title of her long essay about his work: “The Dark Brain of Piranesi.”

Susanna Clarke is the latest writer to draw inspiration from the endless halls, staircases and arches of the prison engravings. The eponymous hero of her new novel Piranesi lives alone in a version of them, a salt-soaked and sun-drenched series of halls he calls the House. And reading her novel in 2020 makes it clear why Piranesi’s Carceri have, in the end, become even more indelible than his images of Rome’s decaying grandeur. In Piranesi, and in Piranesi, it’s prisons all the way down.

Clarke’s novel comes at a moment with an unfortunate resemblance to Piranesi’s Italy. The COVID pandemic has constrained our lives in various ways, forcing most of us to live in greater confinement than we’d like, making travel more difficult, and death more likely. Even those of us who shared quarantine with family and loved ones have at least a passing familiarity with Piranesi’s monastic life in the House. Anyone who’s taken off a mask after hours of breathing stale air can appreciate Piranesi’s strange, almost somnolent satisfaction with the most common comforts of life (shoes are a joyful luxury for him).

At times the book celebrates escapism, the purity of isolation from society and the Waldenesque hope that it might make us better people. At the same time Clarke condemns it as a trap, questioning the value of fantasy’s love affair with portals to new and beautiful worlds.

Clarke’s Piranesi is a prisoner, but the nature of his predicament isn’t immediately clear, and the House is as virtuous as Piranesi’s Prisons are depraved. In fact, the hero is profoundly happy, living in a distinctly un-Hobbesian state of nature. He passes time by exploring the halls of the House, fishing for his dinner, and looking at the statues on the walls. He makes things out of seaweed, spends almost all of his time alone, and considers himself blessed. He’s unaware of any other world but the House, and he has no enemies that he knows of—only one other person lives in the House. The Other, as Piranesi calls him, seems friendly enough, and is sometimes even helpful.

Seeking to reconcile his faith in God with the reality of evil, the economist Malthus wrote that “evil exists in the world not to create despair, but activity.” Piranesi stays busy. With no long-term goals other than exploring the House, Piranesi fixates on basic tasks like making broth to keep up his strength, repairing fishing nets, or cataloging the statues in the House. It’s a suspended animation familiar to those of us who have spent months studying the minutiae of social media, bingeing Netflix, and worrying over houseplants. You can easily lose a day, a week, and then a month. Next year is no longer a concrete fact of our reality, but a nebulous bundle of expectations about the future condition of the world, out of order and incoherent as Piranesian architecture. Clarke’s Piranesi is similarly focused on the present, writing the journal entries that comprise the book in present tense, and marking them with whatever event he finds most significant: “The One- Hundred-and-Ninety-Second Western Hall,” “I resolve to take better care of Myself,” “I write a letter,” “The other explains that he has said this all before.”

A Labyrinth in the Shape of a Book 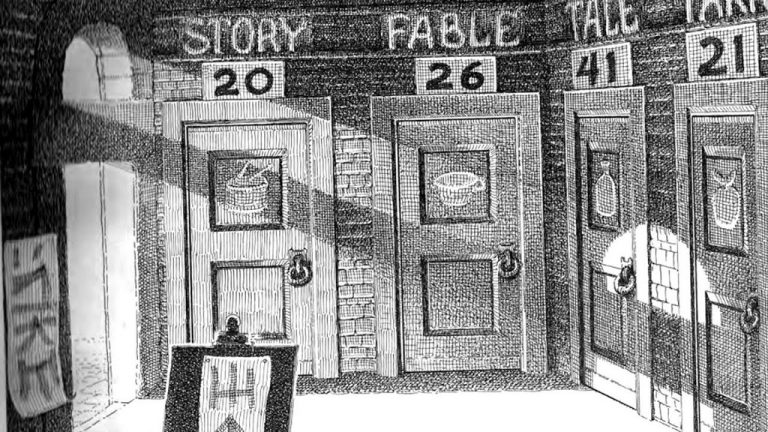 For critics like Yourcenar, time stood still in the Prisons too: “Nor does time move any more than air; the perpetual chiaroscuro excludes the very notion of the hour, and the dreadful solidity of the structure defies the erosion of the centuries.” As the mystery of Piranesi unravels, it becomes clear that the House itself induces forgetfulness—a psychiatric symptom sometimes induced by lingering malaria—and that its basic units of time, the constantly changing tides, are more reliable than months or years. The House is no paradise.

Generally, in escapes to other, unfamiliar worlds—a common trope in fantasy writing—readers hope to find new ones in which the usual confinements, tortures and various injustices of our world have no power. In different worlds, talking animals throw us banquets because we’re the right species. Personal limitations are overcome. Lions and protagonists alike find their courage. And visitors who know nothing about the world they’ve stumbled into resolve long-held grievances nonetheless, restoring balance and order. This kind of wish fulfillment, common in fantasy, is darkly reversed by Clarke’s trapped naif.

This isn’t the first time Clarke has played with genre conventions. Jonathan Strange and Mr. Norrell also questioned long-held values of fantasy, a story that, as noted by Elizabeth Hoiem in a 2008 essay published in Strange Horizons, ended with women saving the world, power-obsessed aristocrats trapped in a column of perpetual darkness, and a Black hero with godlike magic power. Its refusal to conform with the time-honored trope of Carlylean Great Magicians saving the day is echoed in Piranesi’s disturbing vision of the traditional portal fantasy.

The confined but benevolent world of the house is dangerous because of the people who traveled there. A self-sufficient master of the tides, Piranesi would be completely safe if the Other would just leave him alone. The only tortures in this parallel world are the ones humans brought to it. This is true in the prison universe Piranesi etched as well, which is stuffed with the machinery of pain: chains, hooks, nooses, racks; a giant St. Catherine’s Wheel. Among them, tiny figures stroll, apparently indifferent to the dungeon paraphernalia around them, the suffering close at hand. “Such gnats do not seem to notice they are buzzing on the brink of the abyss,” wrote Yourcenar.

In Piranesi, the hero is happy in his prison world because he is ignorant of ours, as oblivious as the gnats. When he contemplates the skeletons of former prisoners, he isn’t afraid but comforted by the idea that one day he’ll be numbered among them. Unseen dangers lurk even closer. The duplicitous Other pretends to be Piranesi’s friend, but is actually his jailer. Yourcenar, in “The Dark Brain of Piranesi,” noticed the same perversity in the Prison plates, comparing Piranesi’s work to de Sade, who “both express that abuse which is somehow the inevitable conclusion of the Baroque will to power.” While Clarke’s Piranesi shivers in the dark, The Other sleeps in a warm, dry bed.

Our world isn’t so different. Public officials call for citizens to stay at home, but the rich flee the cities, finding solace in abandoning the world for a cabin with a nice back deck and contactless delivery services. The pandemic has given us claustrophobia and agoraphobia, afflicting us with the same symptoms as the feverish artist. The unsettling idea put forward in Piranesi is that such a solitary confinement might be good, inspiring, or beautiful.

Piranesi’s cover depicts a satyr that evokes Mr. Tumnus from The Chronicles of Narnia, and begins with an ominous epigraph from The Magician’s Nephew: “I am the great scholar, the magician, the adept, who is doing the experiment. Of course I need subjects to do it on.” Like the Pevensies in Narnia before him, Piranesi’s been behind the wardrobe a long time, long enough to forget that he was once a citizen of our world. He lives in the House as both its High King and the unwitting victim of an adept’s cruelty. But instead of succumbing to dread and listlessness, the malarial hangover of the enchantment at work in the House, he adopts its logic and reality as his own, thriving in a way that surprises his jailer. Like the oblivious figures in the engraver’s Prisons, Piranesi’s confinement is only a state of mind. The Piranesi we meet at the beginning of the book is enjoying a much richer life in his lonely Narnia than the one he left behind on Earth. At the end of The Lion, The Witch, and the Wardrobe, the Pevensies “lived in great joy and if ever they remembered their life in this world it was only as one remembers a dream.”

Reading Clarke’s novel makes me think there’s no coming back to Earth, for us or for her Piranesi. The lamp-post is knocked over, and the wardrobe’s smashed to bits. At times, Piranesi seems to suggest that the world is better off without us in it, and that we’d all be a lot happier if we were confined, alone, to a prison of endless halls, birds, statues, and water. In another, less interesting book, the drowned halls and crumbling statues of the House might suggest a ruined monument to long-dead humanity, the result of climate cataclysm. But Clarke’s Piranesi is protean. We bring to it what we take with us, and it offers no glib self-explanation. From the world of one dark brain to another, we can recognize genius; but its aims and reasons are ultimately inscrutable, as hidden to us as the conjurer’s tricks.

Announcing the Winners of the 2020 Rona Jaffe Foundation Writers’ Awards

Six extraordinary emerging writers will receive grants of $30,000 each

No One Likes a Copycat Au Pair

"Ways of Seeing" an excerpt from White on White by Ayşegül Savaş, recommended by Sanaë Lemoine

Hootie & the Blowfish Killed My Rock and Roll Dreams

What She Heard in a Room Without Sound