Queer Storytelling Keeps the AIDS Crisis From Being Erased

Carter Sickels, author of "The Prettiest Star," on the importance of learning from those who came before us

Few books are able to oscillate the fine line between now and then while also invoking a sense of urgency, a reminder to bear witness to the institutional negligence of the past and to actively resist when it resurfaces in the future—like it is now amidst the COVID-19 pandemic. Carter Sickel’s The Prettiest Star is that mirror of accountability, a reflection of how a society has or has not changed after a shift in collective consciousness, specifically during the AIDS epidemic. It is a stark reminder of the plight of so many young gay men and sounds the alarm that the fight for healthcare equality is far from over.

At eighteen, Brian leaves his small-town Appalachian life and family behind in pursuit of freedom and acceptance in New York City. Over the course of six years, Brian would watch as AIDS claimed members of his community, his friends, and, ultimately, his lover. Infected himself, Brian makes the decision to return home to die, to return to a place where he would be ostracized from his community, from his own family, but chooses that over a city filled with memories of loss. The Prettiest Star tests the elasticity of love and understanding, and proves that pockets of both—even in a place that overwhelmingly rejects you and deploys constant reminders that you are not welcome—can be found.

While it is a somber remembrance of the 40,000 lives claimed, it is a testament to the love and endurance of community and family, both chosen and not, and a confirmation of what we know to be true: Sickels shines bright with The Prettiest Star.

Greg Mania: Why is it still important to tell stories—both fictional and not—from the era of the AIDS pandemic?

Carter Sickels: We need to tell and keep telling all kinds of queer stories, and stories of our queer past—to remember and acknowledge, but also to figure out where we are now and possibilities for the future. History has a way of erasing, silencing, and distorting queer voices. There is this essay called, “I’ll Be Somewhere Listening for My Name” by Melvin Dixon, a gay Black writer who died from AIDS complications in 1992, and he said queers must “guard against the erasure of our experiences and our lives,” and I kept coming back to this when I was writing The Prettiest Star. This country still hasn’t faced the magnitude of the cruelty and grief during the AIDS crisis or its lingering effects. And, AIDS is not over—there is still no cure.

GM: David Bowie is pretty prevalent in this book: from the title to little nods interspersed throughout. What does David Bowie mean to you, personally, and why was his influence so important in ushering in many of the themes in this book?

CS: I didn’t listen to Bowie in high school—I came to his music later—but my character Brian, who grew up in the 1970s, discovers his music when he’s still just a kid. For Brian, like for so many young queers, Bowie shook his world in the best way: this electric and glamorous free being who embraced gender fluidity, who represented queerness and sexuality without shame. Bowie shows Brian another way of life exists outside the confines of his small town. While I was writing the novel, David Bowie died, and I couldn’t stop listening to his music or reading about him, and his influence in the novel grew to this god-like presence. His songs gave me a way to frame the different sections, and, of course, the title comes from Bowie.

GM: This book, as beautiful and affecting as it is, is heavy in terms of its subject-matter. As a reader, I had to take breaks to emotionally digest. How did you take care of yourself while writing it?

CS: A lot of the research I did was emotionally difficult. I read articles and books, and watched videos and documentaries, looked at photographs and art—and some of it gutted me. There are so many moving and brilliant examples. The documentary We Were Here, directed by David Weissman, about the AIDS crisis in San Francisco during the 80s and 90s, is a beautiful, poignant testament to grief and loss, and to the resilience of the queer community. But the film also captures just how young so many of these men were. So, yes, at times I felt raw and heartbroken—but more so in the research than in the writing itself, when my focus was on the work of writing: developing scenes, paying attention to each sentence, every word. I wanted to be honest to the trauma and grief of the AIDS crisis, as well as to the strength of love—to write a book that’s emotionally complex, that will make you feel and think.

GM: Paul Lisicky’s latest memoir, Later: My Life at the Edge of the World, which came out just a few weeks ago, is a dispatch from Provincetown during the AIDS crisis in the early 90s. What kind of unique power does fiction wield when talking about this period of time?

A Love Letter to a Gay Haven During the AIDS Pandemic 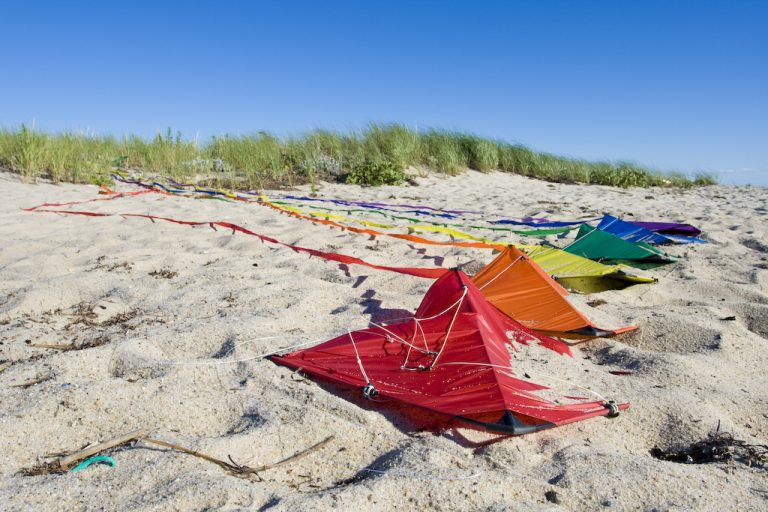 CS: I just received Paul’s book in the mail, and can’t wait to start it—I heard him read from it, and it was just stunning. We need all kinds of fearless and heartbreaking stories about the AIDS crisis. Memoirs can document a time and place with such powerful intimacy: the author was there, and these are his personal memories. Fiction, of course, doesn’t require autobiographical content, but you’re still putting yourself on the page. I love writing fiction for some of the same reasons I love reading it—to disappear into the world of the novel, to walk in others’ shoes and inhabit their lives, to feel enlightened and challenged, changed.

GM: To say that this novel is timely—in the time of COVID-19 and how our administration is handling it—would be a profound understatement. What is the message you are trying to convey in this regard?

CS: This is such a difficult question because right now we’re right in the midst of this global pandemic, and things are changing so rapidly from day to day. I started the novel in 2013, during the Obama years—a different time, a different world. I finished the novel long before the outbreak of COVID-19, and it’s been very strange and surreal to experience my novel coming out during this global emergency and chaos. I don’t want to draw any quick or simple parallels between this and the AIDS crisis—40,000 people died of AIDS and six years passed before Reagan even mentioned AIDS in a speech. Still, I think we very much should look back at that time—to learn from the queer community and AIDS activists, how to survive a cruel, and in this case, highly incompetent, administration. I’m wary of messages in books—but maybe aspects of the novel will resonate differently now: how will we support each other, how do we build community and embrace compassion and kindness, what kind of society do we want to be?

GM: And lastly, my favorite question to ask my authors: what did you learn about yourself while writing this book?

CS: Great question. In the four or five years I spent writing The Prettiest Star, I certainly wrestled with my own doubts: who was I to write this story, and was this story worth telling? So, maybe something I learned about myself was that I could work through these doubts, that my commitment to the writing, and that the story and characters, carried me. Though Brian’s story isn’t my story, as a queer trans man, I understand something about how difficult it can be to come out and to experience rejection—and writing into that pain and vulnerability wasn’t always easy. I taped a quote by one of my favorite authors, Dorothy Allison, above my desk, for inspiration: “The best fiction comes from the place where the terror hides, the edge of our worst stuff. I believe, absolutely, that if you do not break out in that sweat of fear when you write, then you have not gone far enough.”

Poetry, graphic narratives, memoirs, essay collections, and novels that are expanding the canon of AAPI literature

Each X-ray Erases Me a Little More

The Unvarnished Story Behind the Most Controversial Group in AIDS Activism

Sarah Schulman, author of "Let the Record Show," on the history of ACT UP New York