I n the worst month of the most severe drought in California’s history, my parents built a swimming pool. Reserve your judgment for a moment: they also replaced the lawn with native planting and powered the thing with an Israeli solar-powered saltwater filtration contraption strapped to the roof. Their architect said Tom Brady and Giselle also used it; my dad wondered whether the Brady-Bundchens had as many problems with it as he did.

If you still question this choice for either hypocrisy or environmental irresponsibility, I refer you to Joan Didion’s 1977 defense of swimming pools written in the midst of the second worst drought in California’s history. Rebuking those not from California who took smug pleasure in the idea of Californians having to drain their pools during drought, Didion explains “in fact a swimming pool requires, once it has been filled and the filter has begun its process of cleaning and recirculating the water, virtually no water.”

I happened to read this vindicating passage in Didion’s essay Holy Water on a floatie in the new pool — a fitting first encounter with Didion’s work, whose life as an author, wife, mother, and Californian is the subject of the new documentary “The Center Will Not Hold.” Although she is now associated with the cool detachment of New York City, Didion’s native California served as her first inspiration and subject in works such as Run River, Slouching Towards Bethlehem, and The White Album. In her reflective later work as well, the character of California as a mood continues to emerge and evolve. And as another California native living in New York, the experience of reading, in later months from my apartment, Didion’s description of the Los Angeles summertime evening’s smell of lavender, filled me up; her often tender fascination with California warmly energized, and continued to stoke, my own.

So during that first interaction with The White Album in the swimming pool, I gleefully read on as Didion delved into an examination of the pool for its symbolic meaning to Californians like herself. But despite the connection with this author I was discovering, I was puzzled by her conclusion that pools symbolize “order” rather than the more commonly “misapprehended” symbol of affluence and a “hedonistic attention to the body.”

Thanks to their prominence in everything from tabloid photos to David Hockney paintings, pools are a focal point for imagining California for both residents and observers. But before reading Didion’s passage on swimming pools it never occurred to me that pools could mean different things to different… swimmers. I saw that pools represent more than just a small body of water common to California backyards; my dad’s pride in his new pool and the affectionate enjoyment I take from diving in make me sure of it. But where does the meaning different Californians attach to pools originate?

The California Joan Didion etches in her writing is a place both laconic and volatile, arid and abundant. Drawing on her heritage as a member of an Old Sacramento family, many of whose ancestors barely survived crossing the plains in covered wagons in order to claim an unruly coast as their own, she comprehends California’s existence as a perpetual state of struggle and contradiction. She says “California is a place in which a boom mentality and a sense of Chekhovian loss meet in uneasy suspension,” whose residents both revere and fear a “river running wild and undammed.” Despite the adversarial relationship between the land and its earliest (white) residents, Didion, in early writings like Run River, Notes from a Native Daughter, and Holy Water, invokes this pioneer-era California with affection and pride. Didion locates her identity in a romanticized era of California history defined by taming land and water.

This California identity is Didion’s frame of reference when she assesses the symbolic meaning of swimming pools as a symbol “of control over the uncontrollable.” The same impulse, born from her heritage, for control, fuels her fascination with agricultural water systems, or causes her to envision the Hoover Dam while driving down Sunset Boulevard, and to venerate her home in Malibu, about which she says “I never loved the house on the Pacific Coast Highway more than on those many days when it was impossible to leave it, when fire or flood had in fact closed the highway.” Didion is her most true California self while either struggling with or marveling at mastery of the elements. In an interview with Michiko Kakutani after publishing The White Album, Didion says “order and control are terribly important to me,” a statement which surprises no reader; no wonder Didion’s swimming pool reverie ends with “a pool is water, made available and useful, and is, as such, infinitely soothing to the western eye.”

Late in Joan Didion’s career in the book Where I Was From, she reflects on her early writing about California and her relationship with her home state. Assessing her self-described “nostalgic” view of California in her earliest writings, she teases apart the ways in which Californians lament change. She cites California’s constantly booming population history, and, in contrast with other states that have longer institutional memory, finds that change is and always has been a constant in California; that there has always been “obliterating increases, rates of growth that systematically erased freshly laid traces of custom and community.” She deduces that because California has experienced many population transformations, the California of the time a person arrives will always represent the way things ought to be. Didion concludes “discussion of how California has ‘changed,’ then, tends locally to define the more ideal California as that which existed at whatever past point the speaker first saw it.” 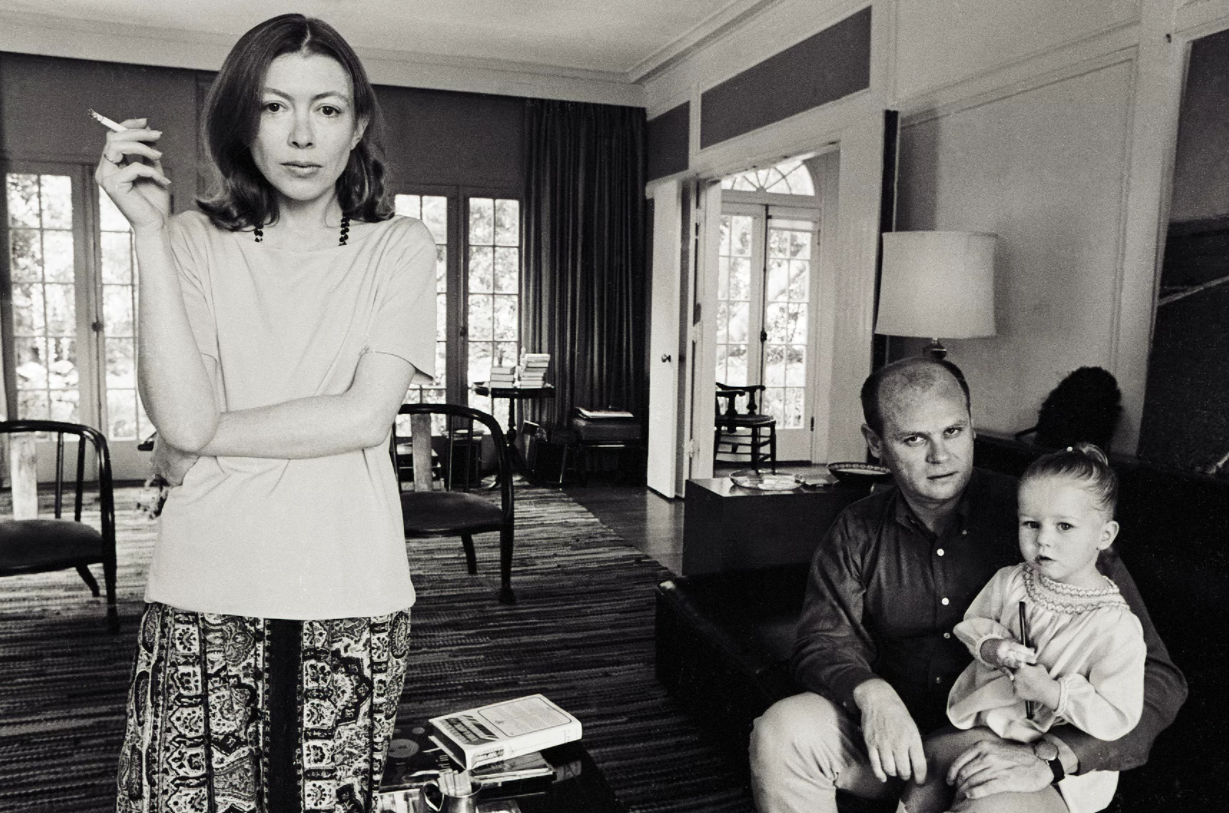 I would amend this statement. The idealized version of California depends not upon when an individual first arrived, but instead, when that person’s family became Californian. Didion remarks in Where I Was From that the family events of settling California that most define her vision of California occurred before her birth. Similarly, my idealized version of California rests not so much in my own childhood — a good one, but still filled with the usual angst — as in my family’s stories of what becoming Californian meant to them: how my grandparents moved from the land-locked Midwest to Los Angeles, where, away from their immigrant parents, they got to buy homes and eat oranges. The easy haze I associate with California originates with my parents’ stories about cruising through the Valley on their bikes, or trekking over the Santa Monica Mountains to and from Zuma Beach, sunburned thighs sticking to vinyl car seats, relieved only by jumping in the swimming pool.

For me, as well as in the larger cultural imagination of California, pools do symbolize this coastal, hybrid urban-suburban dream that I imagine my parents and grandparents lived. Based in Los Angeles, the 1960s iconic film The Graduate communicates Dustin Hoffman’s character Benjamin Braddock’s resistance to that dream by putting him in a swimming pool in a scuba suit, essentially suffocating under the weight of family expectation. That expectation or dream of career, family, house did not repulse my father, who graduated at the top of his class at three California institutions of higher learning, married a girl from the Valley, and settled on the West Side of Los Angeles — a “native son” if I ever saw one. So he eventually built that swimming pool.

Like Joan Didion, I call myself a “native daughter” of California, a statement with which I do not know that she would agree. Claims to this title aside, Joan Didion and I inhabit and idealize different Californias in our minds precisely because our families arrived at different times, and became Californian in different ways. The regular mention of swimming pools in Joan Didion’s writing about California indicates that, for Didion too, the swimming pool is significant in the imagination of California. But because of the difference between Joan Didion’s heritage and my own, we disagree on the meaning of its symbolic significance. As Didion says, pools are “soothing to the Western eye.” But the symbolic readings Didion rejects — pride in “affluence” and “hedonistic attention to the body” — are also aspirational elements of the California urban-suburban dream that pools symbolize. Perhaps, as Didion says, “the apparent ease of California life is an illusion.” But pools, for their owners and swimmers, help maintain that illusion within urban-suburban life, whether “real or pretended.”

Perhaps early in her career Didion would conceive of one symbolic interpretation as more valid than the other. Didion wrote in Notes from a Native Daughter “which is the true California? That is what we all wonder.” But comprehending California in Where I Was From as a generational palimpsest where the only constant is change, perhaps Didion could see that both conceptions — of control, and of leisure — are true about pools, and about California. In California, the truth of the place is not just “elusive,” as she says. It is, inherently, fluid.

A New Story by the Master of Hardboiled Detective Fiction

“The Glass That Laughed” by Dashiell Hammett

Should an unfinished short story by the "Little Women" author, written at age 18, have been left on the library shelf?

What We Need Right Now Is the Gentle Novel