Rivka Galchen on the Particular Horrors of Actual Witch Hunts

Katharina Kepler is a witch, or so her neighbors think. She’s also the mother of brilliant Johannes, mathematician, and author of the planetary laws of motion (you may have heard of him)—not to mention, an odd woman, an herbalist with a frank disposition who tries to serve cures, who doesn’t quite fit in. Rumors say she served her neighbor a bitter drink that made her ill, that a pig died after she touched its hoof. But is she a witch?

Rivka Galchen’s latest book, Everyone Knows Your Mother is a Witch, is about fear, suspicion and the ways we make each other into monsters. A reimagination of the trial of Katharina Kepler, told in her voice, it’s a novel about the power of narrative over rational, or factual, truths that plays with layers of belief. In all of these ways, it’s a 17th-century witch novel that feels especially relevant for our fractured, divided, complicated times.

Funny, imaginative and laced with a sly, knowing charm, as one can expect from Galchen, the novel looks at who we are in times of hysterical fear with refreshing empathy. After all, this isn’t just the story of a witch trial—it’s the story of us.

A few days before the publication of her novel, I talked over Zoom with Galchen, my friend and former writing teacher, about alternative facts, misfits, astrology, and the paradox of writing historical fiction to understand our current moment.

Carianne King: How did you discover Katharina’s story? What was the spark that made you think it could be a novel?

Rivka Galchen: I actually came across her totally by chance. These past four years have been stressful for everybody in different ways, and I think it’s affected their reading in different ways. I found that I was reading a lot of nonfiction scientific biographies. I know that sounds like a random genre. But I found it really comforting.

I really wanted to read about Kepler, but there really wasn’t anything in the English language. I looked everywhere. 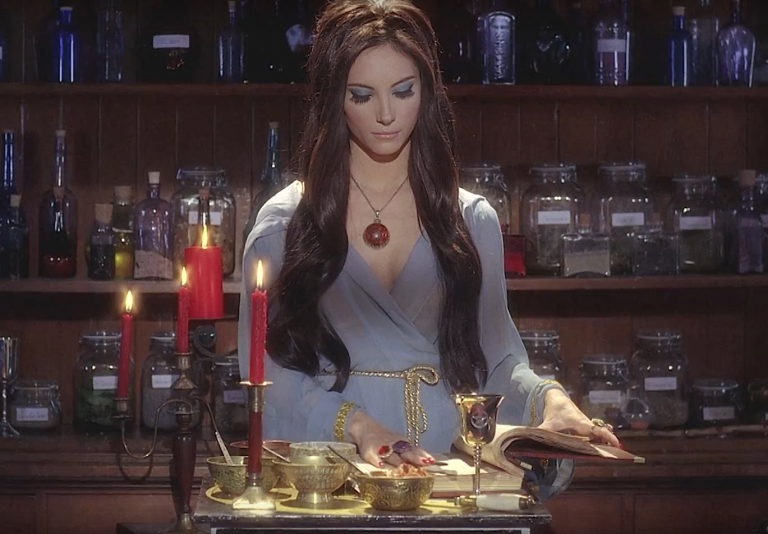 I noticed when I was reading the book, this scholarly book, I was reading it with a lot of suspense. Like, “I wonder if she is a witch or not!” I observed that emotion in myself, and that was part of it, too.

I also connected Katharina to women in my life—older women who don’t read the room, who are really smart, really capable, but who rub people the wrong way, or who people process weirdly because they have their own norms and their own way of doing things. I’ve thought of Katharina like that. She was almost the oldest woman in town, she’d been making her own living for decades and that was just not normal. Her child was very exceptional. I thought that she must seem strange to people. And that did connect to women, and men, in my life who are more susceptible to being misunderstood.

CK: The novel reimagines the depositions of Katharina’s neighbors, based on real historical documents. How did that fill in a picture of who she was?

RG: I think what I found most moving and touching and sort of sad was that Katharina was someone who was outgoing—someone who felt like she had quite a bit to offer. She was that person who gives you advice maybe when you don’t want it, or maybe you don’t want it at the time, and then it goes badly. Or, maybe, sometimes, it’s bad advice!

What I found moving is that you can actually see, in the deposition of the tailor, for example—he didn’t want to throw her under the bus, as we would say today. He knew he didn’t really know what the truth was, and he was also a man who had suffered terribly. He was like, “Well, maybe, maybe if we looked into it…” and I found that to be such a human moment.

When I was first writing this, I thought, how do you write this story? Because if it’s just a bunch of evil people persecuting an innocent person—that’s a nonfiction story, that’s not a novel. But there were these moments where I saw a human trying to contend with something beyond that.

CK: Do you observe that women who go against the grain, both back then and now, in 2021, are often the ones to be called witches?

RG: I think “unrelatable” or “unlikable” are the more modern witch terms. Maybe with a dash of “ambitious,” though I feel like that is maybe more of a 1980s slander used for women. Today, at least in my mini-world, I’d probably feel pretty good about being called a witch. It does remind me, though, of watching reruns of the sitcom Bewitched every morning before school as a kid. Right before it, there was I Dream Of Jeannie. Both shows were about women with, literally, extraordinary powers. It’s interesting to think how those shows “worked.” Both of the powerful women were very likable! Thinking on those shows, I wonder if in some ways we’ve slid backwards, even if in other ways we’ve progressed.

CK: Reading the novel, I was reminded, of course, of “alternative facts” and the Trump era we just witnessed. How much was this on your mind, either subconsciously or explicitly, as you were writing?

RG: It definitely was on my mind, but the way that I work, it had to be at the back of my mind and not the front. I really wanted to escape the present moment. I think we all found it stressful. I started to hate my laptop, because that was where I read the news.

Katharina, she’s the mother of an amazing mathematician, and she has this almost childlike, sweet sense that if you can prove something, people will listen because you’ve shown why it’s the case. I find that quite moving because it’s so incorrect. It’s not the way humans seem to work. And so that was part of the connection to the present moment—it was just the folly of thinking, like, if you just run a fact-check on this, it’s going to go away.

That was part of it, and also, I’m still one of those people, who felt like we’re watching the end of American democracy. In a funny way, to go back and read about the Thirty Years’ War and find out that it ended. I think there was something comforting about traveling back in time where these became stable horrible things instead of suspenseful horrible things.

CK: I read that Donald Trump used the term “witch hunt” 300 times on Twitter during his presidency. What do you notice about how the term has been appropriated today? Is Donald Trump a witch?

RG: The man, devastatingly, has powers. But his powers seem so human—in their origins: extreme selfishness, extreme greed, extreme aggression, extreme cowardice. I don’t think he merits the aura of the supernatural.

But in terms of that phrase, “witch hunt,” it has been terrifying to see him convince millions of people that the perpetrator of injustice is the opposite: a victim of injustice. We see how the spell is cast, yet remain vulnerable to it.

CK: Simon, Katharina’s legal guardian, who helps transcribe and tell her story, is told, “People don’t like an old lady story.” Do you agree that the perspectives of older women are often sidelined in fiction?

RG: One of my favorite books is Memento Mori by Muriel Spark—it’s about a bunch of octogenarians, but she wrote it in her 30s! They’re all getting these phone calls that one day, they will die, and so it’s like a mystery or a murder mystery, but it’s actually true. They’re all old and they are going to die.

It’s not like there’s no books with older people and older women in particular. It’s not none. There’s just very few. And then it always stayed with me that Spark wrote that book when she was in her 30s, that it was actually a relatively early book for her. And she’s such a strange human being, and I thought that part of that strangeness that worked for her was that she could take these people seriously when most 30-year-olds would be writing about love and marriage—or whatever it would be.

CK: Speaking of stories we tell ourselves, many people I know are either earnestly or ironically obsessed with astrology today. What do you make of today’s astrology trend?

RG: When I was trying to learn more about astrology, I connected to this feeling of being underserved by the knowledge-gathering tools around you. Like, feeling underserved by self-help and neuroscience and even just in terms of your own life and your relationship to all those things covered in astrology—like love, work, money. I feel really sympathetic to those tools being inefficient. I can’t make the same leap into feeling like this random, other cockamamie thing out of nowhere is somehow sufficient. But I can connect to the emotion of why people do.

There are details in the novel about how it’s a time of scarcity, and so you do empathize with how the characters are grasping for something that would help them make sense of their suffering.

RG: It would feel like a persecution if the crop failed! You sort of feel like, “The crop failed me.” And if you don’t want it to be because of an angry or indifferent god, you’ve got to find some evil out there.

CK: Katharina weighs how much to engage with her accusers. In fractured times, given the choice between getting into the middle of the hysteria, which could be maddening, or staying impartial and letting things play out, do you think there’s a better choice? To me, it seems like a lose-lose!

RG: I wish that I knew! That’s my big question. It does feel like a lose-lose. I feel that in the contemporary moment, whatever the issue is—it just seems really obvious that you talk to someone who is anti-vaccine, they’re only going to be more anti-vaccine after the conversation, and you’re only going to be more pro-vaccine, or whatever the issue might be. I almost never see a model where you reasoned it out with someone and share your different views and come to something—I just never see that happen. It actually always seems to be other things that shift people.

CK: For Katharina, her witchiness comes from being a misfit, or misunderstood—but I think it also connects to her power, her ability to see things others can’t. Could it ever be a good thing to be called a witch?

RG: Definitely! Being at an angle from whatever setting one is in—that confers insight. So does being vulnerable.

Yes, My Main Character Is Probably You

"Terms of Agreement" by Clare Sestanovich, recommended by Leslie Jamison

The Daring Life of Philippa Cook the Rogue

"The Daring Life of Philippa Cook," from Manywhere by Morgan Thomas, recommended by Meredith Talusan

7 Books About Medieval Protofeminism for the Modern Feminist

Historical, empowering recommendations for those who loved Lauren Groff’s "Matrix"

A Victorian Ghost Story About the Constraints of Patriarchy

Molly Pohlig, author of "The Unsuitable" on how the 19th century was bad for women's insides