AN INTRODUCTION BY CHERYL QUIMBA

Spooky Action at a Distance

In the last sentence of the last paragraph of Bryan Hurt’s slim but bottomless story, “Spooky Action at a Distance,” the unnamed narrator poses a question that begins, “What if there was one small-hearted decision from which all of my other wrong decisions came from?” He has reason to ask. He has just spawned a multiplicity of timelines with the help of a hand-built, time-traveling Delorean, and he would like to know, plainly and without guile, the meaning of all that he has wrought.

It’s a time-traveling story, yes, but “Spooky Action at a Distance” is also, and more so, a piece of fabulist fiction that plumbs the recesses of our doubting, speculating imaginations, and, in particular, that special mental faculty that compels us to wonder, at every turn and arc of our real lives, what might have been had a solitary, modest decision been made differently. The story’s narrator (alongside the Delorean’s co-builder, Dr. Hu) kills Hitler as a child, as well as a host of history’s other bad guys. They save the lives of JFK, RFK, and MLK. They also indulge in villainism, and do the opposite of these heroic acts to create far bloodier, darker timelines. They give rise to a legion of possible outcomes, and because of the unlimited potential to produce more and more timelines, it feels as though the whole undertaking is doubly weighted with consequence, and free from it.

In his contemplations of his personal life, and when speaking to his wife (in this timeline an underwear model: in others, a kindergarten teacher), the narrator deeply wonders what might have been. He feels regret. He longs to have had decided differently. Here, his anguish — his grief for what might have been — is not wholly unfamiliar to a reader in this, or any, timeline.

Spooky Action at a Distance 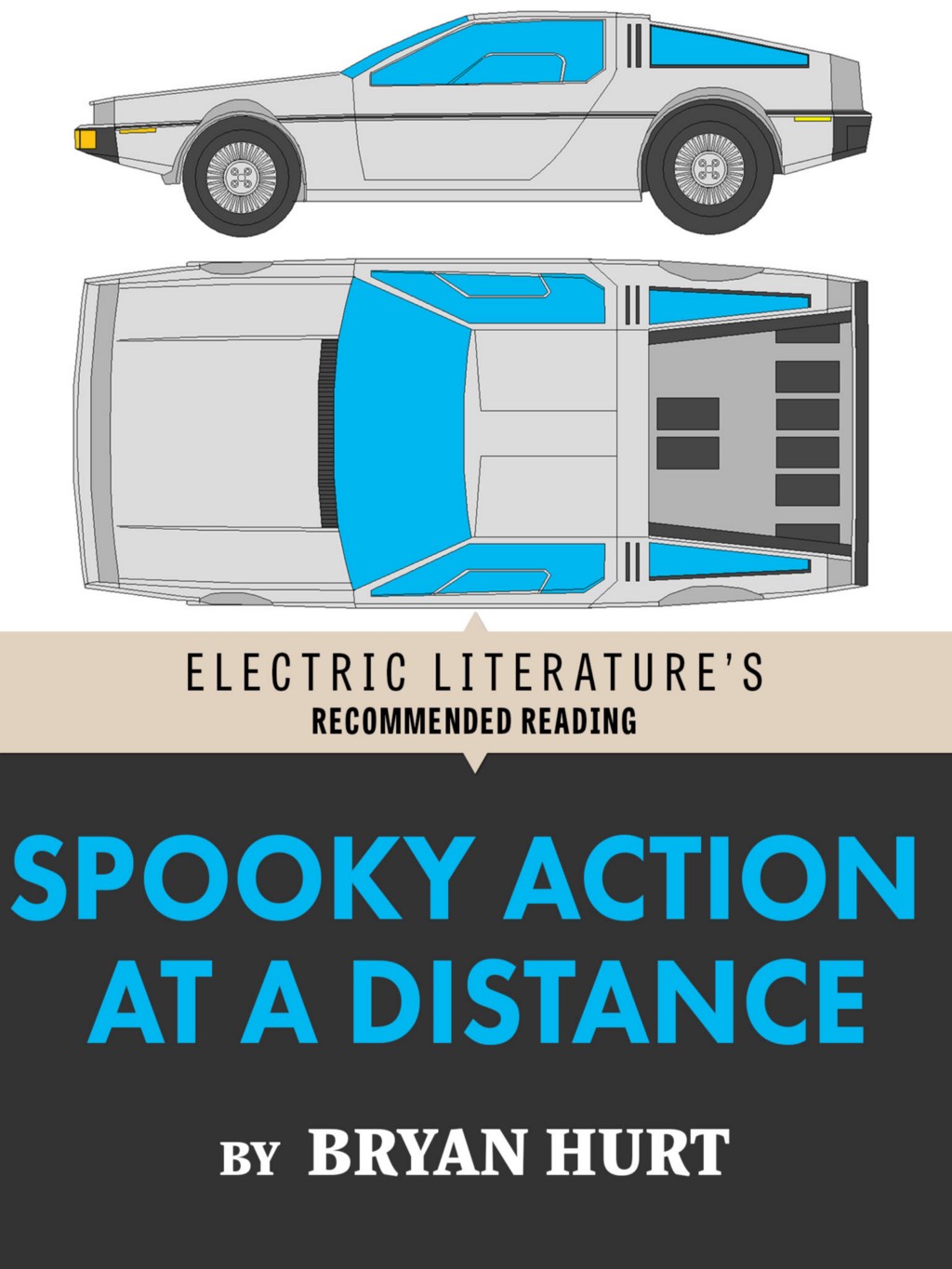 We were surprised, of course, that when we built our time machine it turned out to be a Delorean. We took it apart, put it back together, didn’t matter. Looked at the blueprints, looked at the silver car. Scratched our heads. A joke? A prank? Sabotage? If sabotage, then it had backfired. The Delorean worked.

We drove it out of the laboratory, into the parking lot, set the chronometer, and stepped on the gas. When we arrived we were exactly when we wanted to be. Thirty minutes earlier, our own past.

We parked the Delorean behind a Dumpster, hid in the bushes, and spied on ourselves. There we were, earlier Dr. Hu and earlier me, lab-locked and bending over our blueprints, scratching our heads. After that we did pretty much what you’d expect anyone to do with a time machine. We killed Hitler. Smothered him in his crib.

We smothered lots of history’s evil people. Bin Laden, Mao, Cheney, Robespierre, Attila the Hun. Even though we had the moral imperative it wasn’t easy killing babies, so we saved people too to balance it out. We saved JFK, RFK, MLK. Saved Franz Ferdinand, Marie Antoinette. You’d be surprised how many people can be saved just by pulling up in a Delorean and shouting duck.

Also surprising was that there seemed to be no negative consequences. No double occupancy problems, no grandfather paradoxes, no quantum entanglements. Fixing history was easy, like smoothing out the wrinkles in your bed.

This is how I explained it to my wife, the underwear model. I ran my fingers across our sheets. I told her that every time Dr. Hu and I returned to our time everything was pretty much as we’d left it except for a little bit better. History wasn’t something heavy that everyone had to carry around with them, a backpack full of broken parts.

What about you? she asked of me.

I listened to the cicadas singing their seventeen-year song.

And when I think about those timelines I get so mad. Because what if I had done something differently, married someone else, gotten a smarter lab partner, done better on my college admission tests, and ended up a success?

Or what if it had been a decision that I had made even earlier, something small, that had screwed everything up? Like when I was in elementary school and made fun of Margaret for being adopted. For not being white? What if I’d chosen not to join in with all of the other kids who were teasing her? Or what if I’d decided to stand up for her, told them to stop because we were neighbors, we were in homeroom together, and she had always been pretty nice? What if there was one smallhearted decision from which all of my other wrong decisions came, these decisions growing and growing the distance between what I wanted and what I got until it became so unbreachable that not even a Delorean could cross?