It is next to impossible to read every debut book that comes out in a single year. Even for me, a person who has dedicated the year to reading as many debuts as humanly possible and interviewing newly-published authors for my website Debutiful. Every month, my to-be-read pile grows larger and larger, teetering precariously on my side table. 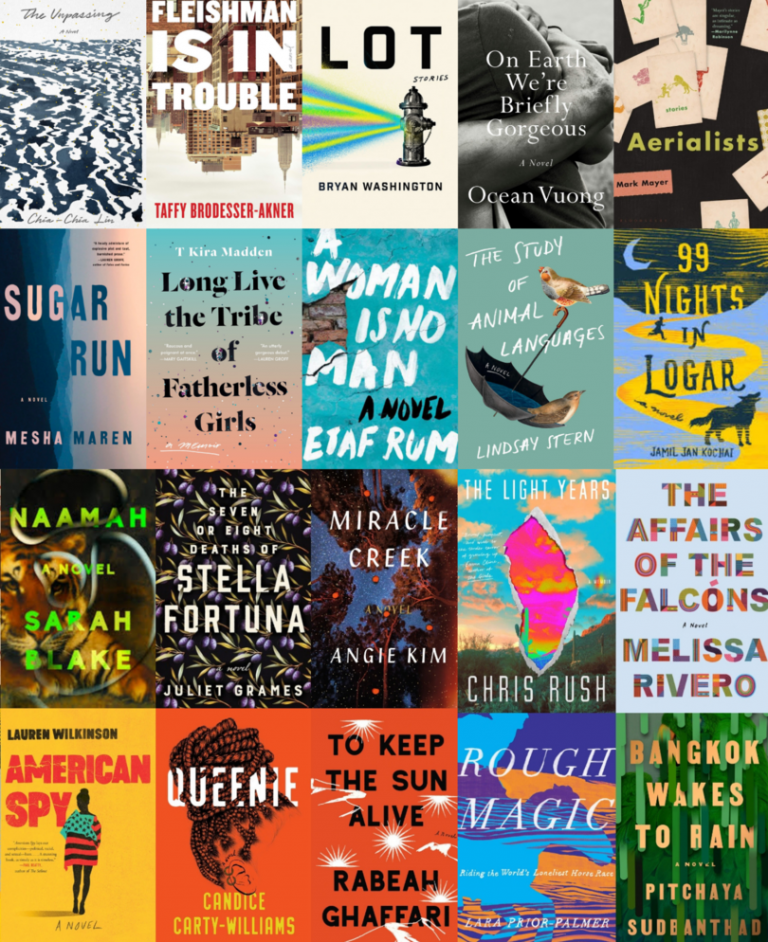 On that note, let me start with a mea culpa: last time I curated this list I left off a book that has turned out to be one of my absolute favorites of the year. I hadn’t yet read In West Mills by De’Shawn Charles Winslow, an extremely well-written book that also featured one of the most memorable characters of 2019.

All of this is to say, that this reading list may have gaps, but it is a starting point. Here you’ll find emerging writers whose books promise illustrious careers to come. From novels and memoirs to short stories to essay collections, these are the books I can’t stop talking about with friends, writers, librarians, and booksellers.

A Prayer for Travelers by Ruchika Tomar

On the surface, Tomar’s story is about a missing woman in the Nevada desert. The book shifts back and forth in time to weave secrets and truths into a gripping plot about the quest to find a friend who has mysteriously vanished. A Prayer for Travelers digs beneath the surface to explore the harshness of living in a suffocatingly small desert town.

Another story about a missing girl, yet this one takes a completely different angle. In Smith’s debut, a young girl named Jude disappears and her alcoholic mother mistakes another girl named Cindy for her daughter. Alone and seeking attachment, Cindy slips into the role and loses herself in this new world. Hauntingly bleak, sure, but there’s an underlying hopefulness in Marilou is Everywhere.

Funny and quirky. Those are the best words to describe the debut collection from Maizes. The collection is about the everyday lives of characters who are outsiders. The excitement in this short story collection doesn’t come from explosive plots; instead, they come from the quiet day-to-day decisions the characters make. (Read an excerpt here.)

A Particular Kind of Black Man by Tope Folarin

A Particular Kind of Black Man is a coming-of-age story about a Nigerian American who grows up in Mormon country Utah (a state with a grand total of 1.12% African Americans residents). The novel explores the unreliability of memory and the inheritance of mental illness, and questions what it means to be “the perfect black man” in America.

Broom, an acclaimed journalist, turns her pen on her own family history. The story begins with a yellow house in the 1960s where a prosperous life was all but guaranteed. It ends on land the house stood now, now deserted and devastated after Hurricane Katrina ravaged New Orleans. But, as Broom writes, it wasn’t just Katrina’s doing that upended the yellow house. It was also years of systematic failure at the hands of the city, the state, and the country.

Goldblatt’s introspective novel is for those wishing Phoebe Waller-Bridge and Henry David Thoreau were friends. In Hard Mouth, a snarky woman retreats into the woods after her father announces that he will not seek treatment for his terminal cancer. In a ramshackled cabin in the mountains, she struggles to survive in the wilderness, alone only with the company with an imaginary friend. Hilarious and thought-provoking, Goldblatt’s debut offers a dark twist on the search for escape.

The stories that fill this collection are spellbinding. Parsons finds something off-kilter in the mundane and runs with it. Black Light is a lot like Texas: everything is big, bright, and bold. (Read an excerpt here.)

The New Yorker writer is already well-known for her sharp observations on, well, everything—whether it’s the epidemic of high schoolers juuling or exploring the cult of athleisure brand Outdoor Voices. This collection of essays takes a magnifying glass to self-delusion from unpacking why we love consuming grifter stories to analyzing the performative identity of being on the internet. Jia Tolentino’s wit and self -reflection shines through her writing.

The Other’s Gold by Elizabeth Ames

Ames’s debut is a welcome addition to the canon of novels that begins with friends meeting in college and then continues to follow their ever-changing relationships with each other at as they enter different stages of their lives. Each chapter of the novel is dedicated to one of the quartet’s mistakes (the Accident, the Accusation, the Kiss, and the Bite) and explores how our lives collide with force and meander away from one another; sometimes with an explosion.

Since I first read Englehardt’s book about a fictional mass shooting at a college, there have been at least a half-dozen mass shootings in America. I say at least because we’ve become numb to these tragedies. The novel takes that numbness head on as it follows characters affected by the shooting in second-person chapters. Englehardt deconstructs the aftermath of a mass shooting and analyzes America’s gun epidemic with a keen eye.

The Secrets We Kept by Lara Prescott

It has been quite the year for the literary spy novel. The year kicked off with Barack Obama-approved American Spy by Lauren Wilkinson. Months later, Prescott uses the true story of a CIA plot to use Doctor Zhivago to influence Soviet Russian citizens to reconstruct the spy genre once more. Prescott takes history and turns it into something new and exciting.

In Diaz’s memoir (it shifts tenses and uses flashback almost like a novel), you’ll find an almost too-Hollywood-to-be-true story. Ordinary Girls chronicles Jaquira Diaz’s coming-of age as her family who moves from Puerto Rico to Miami. “A closeted queer girl in a homophobic place,” her unstable life and drug use led to juvenile detention. Upon release she drops out of school and marries before enlisting in the military. Through it all, you’ll read a queer biracial woman’s quest to discover her place in the world.

There You Are by Mathea Morais

There You Are is a romantic ode to music and how it shapes us. The novel takes place in the 1980s and 1990s and uses two strangers’ shared love of music to explore race and history as they fall in love. This charming book is perfect for those who like a story driven by the complexities of a relationship without getting too cheesy.

Holding On To Nothing by Elizabeth Chiles Shelburne

The characters in this debut are flawed and complex. Set in the Appalachian, these characters want nothing more than to escape their unfulfilled lives. However, mistake after mistake keeps them stuck in their rural Tennessee town where they learn to cope with their realities. There is a sense of grime and grit on every page of Shelburne’s work.

I have never been so captivated by so many memoirs in a single year. All stuck with me for many different reasons. This one because of the twists and turns that makes it read like a bone-chilling thriller. A teenage Brodeur becomes a confidante for her mother, who begins an affair with a family friend. The romance has tragic consequences that an older Brodeur must grapple with years later. Wild Game is a breathless story about love, lies, secrets, and destruction.

On Swift Horses by Shannon Pufahl

Pufahl’s period novel explores the queerness of 1950s American West. She provides a new insight into a period often nostalgically retold over and over (mostly by and about straight, white men). On Swift Horses follows Muriel, a  young wife who secretly works as a waitress at a horse-racing track and Julius, her gay brother-in-law, who goes on a quest to find his lover.

The sadness in Hoagland’s debut story collection is both reassuring and jarring. Some say it is comforting to know others are going through what you’re experiencing yourself. But maybe it’s just painful. In these 15 stories, Hoagland offers these intimate moments of trauma, fear, loneliness, and lusts.

Short and anything but sweet. Set in a post apocalyptic society devastated by a viral epidemic, this dystopian novel hecks in under 160 pages and can easily be read in a day but don’t expect a light read

This novel follows three generations of a family who live in Africaville, a Canadian town settled by former slaves. Spanning the Great Depression to the 1980s, Africaville shines a light on the lives of Black Canadians.

Such a Fun Age by Kiley Reid

This novel about race and privilege is the book we all need to read as the 2020 election years approaches. Such a Fun Age follows Emira, a young black woman who is accused by a security guard at an expensive grocery store of kidnapping the white toddler that she was babysitting.

Even in the 18th century, we were subject to the firehose of news and information—and poets had opinions about it

Novels by Alyssa Songsiridej, Jessamine Chan, and Elif Batuman stand out among the year’s best

Books by Melissa Febos, CJ Hauser, and Tajja Isen rank among our top picks in an outstanding year for nonfiction