The Main Character of ‘Ulysses’ Is Jewish, and That’s No Accident

Joyce’s Leopold Bloom isn’t an “everyman hero,” but an example of a specific kind of outsider

The winter I was 23, two things happened to change my relationship with a country I had long privately (wistfully, romantically, perhaps childishly) thought of as my homeland.

The first occurred as two of my male Irish — that is, non-Jewish — relatives were discussing English football in a pub in Dublin around Christmastime; I and my sister were visiting for a couple of weeks, and at the time of this conversation the two of us were sitting within earshot.

“Who do you support?”

The second happening was unambiguous, and unlike the previous scene I was an active interlocutor: it took place as I was telling two of my Irish relatives about Taglit, a non-profit that funds young members of the Jewish diaspora to visit Israel.

“Who pays for the trips they organize?” the wife of the couple asked.

To my deep eternal shame I did not react; I continued on as though I had not heard her remark. In Ireland, after all, that is how one deals with troubles.

The Annals of Innisfallen, an Irish medieval chronicle, reports that in 1079 “five Jews came from over sea with gifts to Tairdelbach [the king of Munster]” before being sent back. The earliest known record of Jews in Ireland, then, is also a record of expulsion. If the history of Irish Jews is long, the size of the community has always been vanishingly small: the 2016 census reported that a little over 2,500 people (over half of whom lived in Dublin) identified Judaism as their religion. One could challenge the choice to restrict Jewishness, as the census did, to a religious designation; nevertheless, it says something about a group that its most famous member is a fictional character.

James Joyce probably based Leopold Bloom on Aron Ettore Schmitz, better known as Italo Svevo, the pioneering modernist who was born in Trieste to a German Jewish father and an Italian mother. The two met when Svevo was posted to London for work and needed to improve his English. After inquiring about tutors at the Berlitz language school, he was paired with the Irish writer, and friendship between the two quickly extended past vocabulary lists and conjugation tables. Svevo and his wife, Livia Veneziana, were among the first to hear the story “The Dead”; after Joyce had read the breathtaking closing lines, Veneziana presented him with a fistful of flowers plucked from her garden.

Like Svevo (and like me), Bloom is half Jewish, born to an Irish mother and a Jewish father: his surname is the Anglicized version of the Hungarian Virág, meaning “flower.” But Bloom was not brought up a Jew: as Ulysses relates, he has been baptized three separate times. His efforts to understand the rigidly Christian society around him are deeply moving, an example of the open-hearted spirit of inquiry that animates him as a character. Early on in his portion of the novel, Bloom enters a quiet church and sits looking around the empty space: seeing a crucifix with the Latin abbreviation INRI (Iesus Nazarenus Rex Iudaeorum, or Jesus Christ, King of the Jews), he muses that it must stand for “Iron Nails Ran In.”

But Bloom is never accepted: throughout the monumentally unremarkable day during which the plot of Ulysses unfolds, numerous instances of antisemitism occur, ranging from offhand comments to aggressive confrontations. In the book’s first chapter, no one reacts when the Englishman Haines remarks that German Jews are becoming Britain’s “national problem”; towards its midpoint, in the chapter that represents the nadir of Bloom’s day, Bloom is chased out of a pub by a drunk (tellingly identified only as “the citizen”) who threatens to brain him for uttering Jesus’ name. Collectively, these incidents make clear that many of those around him view Bloom as a fundamental outsider, incapable of integrating no matter what he tries.

If the “overvisibility” of Bloom’s Jewishness is what courts antisemitic comments from other Dubliners, the undervisibility of my Jewishness was what permitted others to make such remarks in my presence. With the exception of a few cowlicks, I am the image of my mother when she was my age: several times when meeting her childhood friends or neighbors, I have known them to stare at me as though I were a ghost, a vision of the past stepped forth from a sun-faded photograph. My family in Dublin think of me as half-Irish, half-American, a description that is both accurate and incomplete. If I am permitted insider status, it is both because of and at the cost of this unperceived other side of who I am.

Because Ulysses transposes the epic hero’s journey into the quotidian mode, Bloom is often referred to as an everyman protagonist. Chapter Ten (or “Wandering Rocks”), with its polyphonic chorus of voice upon voice, seems to raise this matter directly: Could anyone be the protagonist of Ulysses? Could the Catholic priest be the focal character as well as the shop assistant, the daydreaming secretary as well as the gentleman placing bets on the horse races? The answer, I think, is no. Bloom is not a ho-hum man without qualities, and he is not the average Dubliner. Joyce’s choice to cast his main character as a member of a minority group about which Dublin society seems at best largely ill at ease charts the course for the entire novel.

In the same chapter that sees Bloom violently threatened by “the citizen,” another of the pub-goers contemptuously dubs him as a “mixed middling.” In context, this epithet refers to the perceived feminine qualities Bloom has, resulting in a “mix” of gender attributes that the speaker finds laughable. Yet it can also, I think, be stretched to include his ethnically mixed background. And the key mark of Bloom’s status as a “mixed middling” is his capacity for empathy, an idea expressed most forcefully in the final chapter, “Penelope,” which also constitutes a recapitulation of stream-of-consciousness narration. Structured as eight breathless sentences narrated by Bloom’s wife Molly before she falls asleep, much of the soliloquy’s attitude towards Bloom is anger, yet at one point, casting her mind back to her engagement, Molly softens, remembering that she chose him because he “understood or felt what a woman is.” This same wish to “understand and feel” is present everywhere, from when Bloom idly muses about how a cat must see the world to when, thinking about a female acquaintance who is in the hospital after delivering a baby, he considers the pain of childbirth and what social reforms might be enacted to ensure proper care for all expectant mothers. The quest to meet the other on equal footing is one that sets Bloom apart from so many of his interlocutors, and it is one that is engendered by his status as an outsider — the same spirit that sees him puzzling out Latin inscriptions in a church early on in the novel. Because immediate understanding is not granted to him freely, Bloom has learned the habit of imagining the world through other eyes. Those belonging to the majority — whether in Joyce’s fictional Dublin of the past or my real Dublin of the present — have the freedom not to have to imagine, a freedom which metastasizes into a desire not to understand others for whom their easy insider knowledge is not a given. To cast Bloom as an everyman, in other words, is to give short shrift to the crucial trait that distinguishes Bloom from the crowds through which he walks.

Joyce does not allow Bloom the triumphant return of Homer’s Odyssey. Odysseus defeats the suitors who have swarmed around Penelope in his absence; Bloom, by contrast, knowingly allows Molly’s lover to visit her, justifying his decision not to act with the words “Prevent useless.” Not every homecoming can be a happy one. 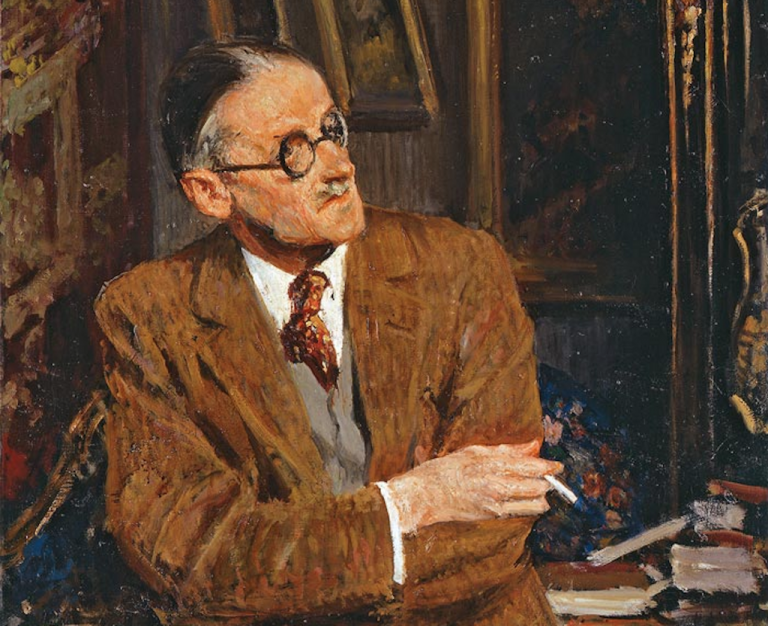 The winter I turned 23, the winter I encountered antisemitism in Ireland for the first time, was not so much a homecoming as a realization that perhaps I was not home at all. It was not that I had thought antisemitism did not exist in Ireland (though up until that point the dooryard of my life had been swept mercifully clear of it). But in both instances mentioned above the speakers were my family, flesh of my flesh, people whom I loved. They knew me, knew what I was, what my father was. And still they spoke as they did. Though I had been raised in America, Ireland was where we spent our summers, where I celebrated most of my childhood birthdays; it was the place I had long imagined I would move to when I grew up. But the realization that the people I cared about most understood neither Jewishness nor, seemingly, the fact of my Jewishness forced me to rethink how truly I could belong there.

Belonging, curiously, never seems to be a question that Bloom contemplates directly in the novel; any possibility of self-pity seems defeated by his own curiosity. His mind flits ravenlike from thing to thing to thing; he imagines metempsychosis, the transmigration of souls, and what if everyone were someone else, and if our spirits might all flow together over the bridges and through the streets, beneath the roofs of the city and the apathy of the stars in heaven.

The World’s Most Beautiful Bookstores

These bucket-list bookshops are worth planning an international trip around

White Writers Pushed Me Out of Fiction and Into the Essay

‘Lord of the Flies’ Is Fired

In the latest installment of Fire the Canon, our panelists suggest alternatives to William Golding’s schoolboy dystopia

‘The Catcher in the Rye’ Is Fired