She’s Got the Whole World in Her Uterus

Goldust is a complicated woman.

On a Saturday morning, as we slipped coffee down our throats and listened to NPR, Goldust declared, “There will be crustless sandwiches and when we get bored, we can alphabetize their medicine cabinets and choose one item to take home with us.”

Goldust often started in the middle of sentences. I’ve learned to latch on and ask less questions, trusting that I’ll learn all I needed to know eventually.

“Another reveal party,” she answered. “Can’t really escape them, can we? Walking outside, a reveal of weather. Food delivered to you, a reveal of whether or not it is good. Overpriced haircut and the mirror—because I like to close my eyes the whole time, don’t you?”

“Not really, but… What’s being revealed?”

“Species,” she said, spitting each syllable into the air.

I stared at Goldust as though her entire mouth had been replaced with gold teeth, rather than just her bottom ones.

Welcome to the Gender Reveal Party for Your New Book

Today’s the day when you find out: Man Booker candidate or beach read? 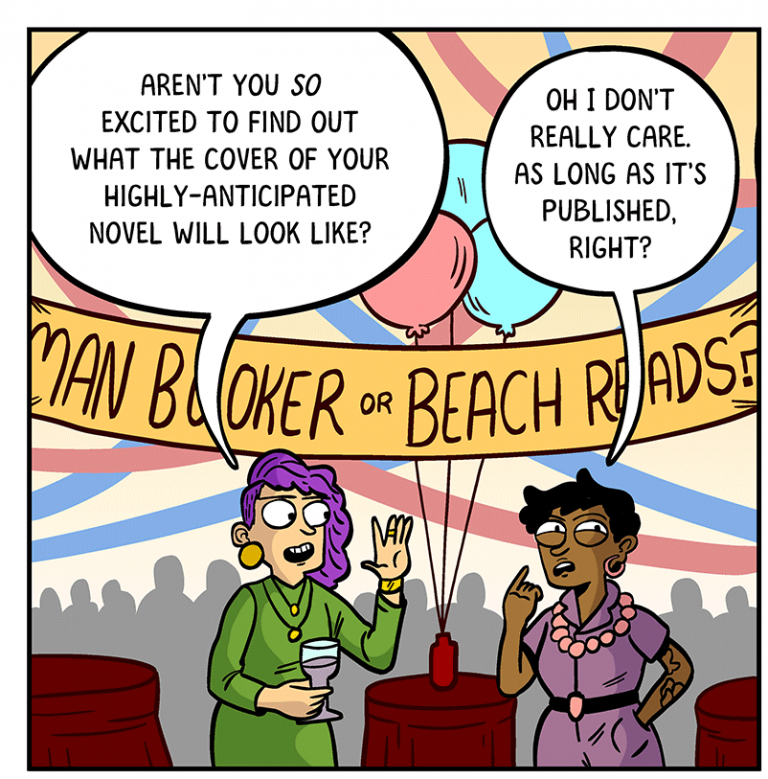 Goldust exhaled loudly. Her lungs were opera singers. “We are way beyond pink and blue now. How boring. How patriarchal. How twenty-first century. How pre-feminist. No. What she is having. Like genus.”

“Are there other kinds of baby?”

Goldust looked at me as though I had cut a trap door into her body and hid stolen goods.

I tried to redeem myself. “I… I… I know there are other identities than boy or girl. I just… I just mean what else can it be other than human?”

I stuffed a second triangle of crust-less sandwich into my mouth and even as I was chewing the first. I couldn’t really decipher what it was. Tuna? Chicken salad? Chopped liver? I drowned it with wine and attached imaginary strings to both sides of my mouth to smile my way across the room. Goldust sat beside me, sharing a story of her backpacking trip in Peru. Though I had heard this story at least twelve times, it never ended the same way twice.

When Goldust went to the bathroom—perhaps to choose an item for her adult goody bag—she left an imprint of glitter on the couch. I tried to angle my body to cover it up, but in doing so, spilled my glass of red wine, which left a far louder stain than the glitter. No one seemed to notice because the cake had been brought out and what else is there to look forward to at a party such as this.

“Well, I’d rather just not know,” said one guest whose hair matched the color of my underpants.

To build anticipation, we played games:

Guess the texture of skin!

Guess the shape of teeth and how many elements they can bite through!

Guess their risk of endangerment!

Goldust emerged with a slurred walk. Her eyelids looked fatigued.

“You okay?” I whispered against her earlobe.

“Twisting the knob, I walked into the room. I thought I’d live a life where I only pronounced pomegranates but never ate one and then I did. It was bloody,” she garbled.

I grabbed her hand and squeezed. When Goldust drank or consumed drugs of any sort, she narrated her thoughts. Sometimes, of course, she narrated mine.

While Goldust waxed on in no particular order or point of view, I leaned over to Clancey, the soon-to-be mother of some soon-to-be-revealed species.

Clancey resembled a balloon: large head and gaunt body just dangling, swaying from side to side. I would not have known she was pregnant.

“Great sandwiches,” I said to her.

“Oh, uh, thanks,” she said, sucking on the polish of her fingernails, which could not have been very good for the baby. “Ordered from the internet. You can really get anything from that place.”

“So, um, what do you… what do you think you’re having. Or what do you want? Or…” “We should cut the cake!” she announced, jumping to her feet.

“You think it’s vegan?” Goldust asked me. “If it’s not buttercream, we are leaving.”

“Don’t you want to know what she is having?”

Goldust lifted her finger toward her eye and tapped. “I can see. Into her. Like X-ray vision. It’s from complications with an MRI I had when I was fifteen. I told you this. She’s having a—”

“We never stopped using protection,” Clancey said. “And of course, I am still on birth control. You know, they don’t talk about the double-pregnancy risk, but it’s there. The overlap, I like to call it. My good friend who moved to Montauk or Montana—I don’t remember—it happened to her. Twice. Two overlaps onto the first. It wasn’t triplets. No, that’s what the doctors wanted her to believe. But they were many months apart. So Brick and I… well, we certainly can’t be expected to abstain, but we’ve been ‘careful.’” She curled her fingers  into quotation marks.

“Maybe Brick wants an overlap,” Clancey continued. “Maybe he wants to set some record. I read about a woman who had a squatter. Have you heard this? A squatter just stays in there. Some women don’t even know they are in there and then all of a sudden, all this liquid pours out and they learn it’s the amniotic fluid! A seventy-nine-year-old woman in Florence or Florida gave birth to a fifty-six-year-old… something or other. It made the news. All the shows, I think. I could have a squatter in me now. I refused an ultrasound. I was afraid to know, to tell you the truth. This pregnancy thing isn’t what it used to be. We can blame it on the milk or the acid rain or infomercials, but whatever, it’s real.”

Goldust was snoring against my shoulder to the tune of a Dolly Parton song.

“Anyway, are we ready to learn what this is?” Clancey motioned to her belly, which looked so flat, I worried she was housing the baby somewhere else in her body.

Clancey grabbed the serrated knife that laid beside the cake. I licked my lips because it definitely looked like buttercream.

I watched the knife sluggishly rise into the air, clutched by Clancey’s long fingers. The cake glistened. My belly crackled. What was in those sandwiches? Goldust fluttered her eyes open. Each lady, decorating the room with their poses of curiosity, gasped as the knife split open the cake. A guessing game of possible species rolodexed in my head. I could feel Goldust peel herself off of me. She looked around the room.

“You okay?” I whispered. “She’s about to announce what she’s—”

I watched as Goldust stood up and walked toward Clancey, who had her hands inside the cake, rummaging around for the piece of paper. “Where the fuck is it?” she kept mumbling.

Goldust grabbed the knife and began to saw away at Clancey’s belly. Clancey did not stop her, too focused on finding the answer baked inside the cake. I tried to lift my body off the couch, but I couldn’t move. All the other women sat with their ankles crossed, in their coordinated outfits, just staring. It was as if my tongue had been cut out, all our tongues, and they were flapping on the carpet, mocking our silence. What were in those sandwiches?

Back and forth and back and forth, blood covered the knife like human jelly. Thick, raspberry jam oozing out. Back and forth and back and forth, layers of skin peeling away. Clancey’s eviscerated belly was the earth, shedding layers flooding the room: water, wind, salt, organs, an overdue History of Western Civilization textbook, a fountain pen, a fountain, a library card, a bundle of index cards. I no longer worried about the stain of Goldust’s glitter and my spilt wine. Clancey was grunting and howling and I wondered if someone should call the police or grab a towel or put away the sandwiches before they spoiled. But all I could do—and all the women beside me—was stare. And wonder, what was she having?

The author of "Wow, No Thank You" on aging, friendship, "Sassy" magazine, and filling a pool with fat people

How Literary Gatekeepers Can Advocate For Black Trans Women

A Novel About Privilege and Class Set in Modern-Day Cairo