Some years ago, long before I had any writerly visibility, I listened to an audio interview with Elizabeth Strout, one of my literary idols, in which she talked a bit about her philosophy around teaching. At that point she was still a faculty member of the MFA program at Queens University, Charlotte. I had applied there, specifically for the opportunity to work with her, having devoured Olive Kitteridge and then quickly, and rabidly, fallen in love with her entire body of work. But it was her thinking as a teacher that motivated me to apply. Every writer can point to the people and moments that either kept them going, or got in their way—those small encouraging or discouraging moments that have an outsized effect. I can’t find the interview online, but I remember clearly how Strout spoke about keeping her students writing as her primary responsibility: persistence above all else. This was the first time I’d encountered this sort of generosity in my newfound industry. It was welcoming, aspirational in a way. I came away from reading that interview with the distinct feeling that being a writer meant being community minded, a perspective I’d taken to heart during my four years at a liberal arts college with Quaker roots. I didn’t yet understand the many and varied difficulties that accompany the writers’ life, but I promised myself I would adopt the same attitude should I ever make something of myself in the literary world. I would do my best to keep those coming up after me writing. 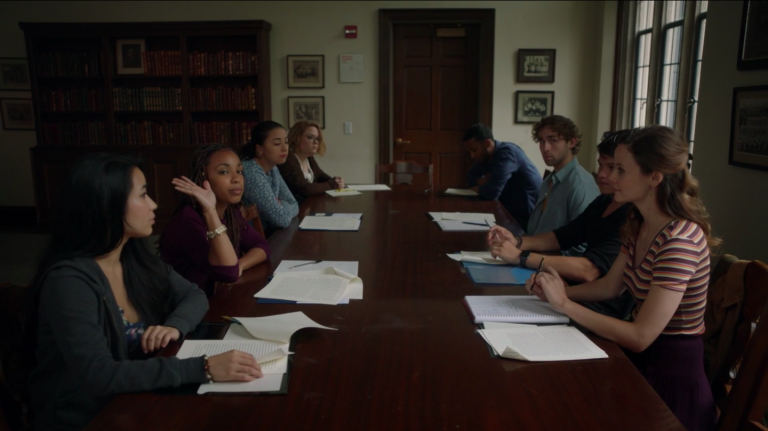 A year or two later, in graduate school, in the same workshop I wrote about in September’s letter, our professor took the last day of class to reflect on our semester, the publishing industry, and to offer the best advice he could. He told us that literary success (however you defined it) had less to do with talent and more to do with will. He employed an oft-used metaphor: a fleet of racers jumping from a dock into a lake. The successful writers, he said, swam to the other side. Many would turn around—most within months of graduating the program. This had nothing to do with talent, he impressed upon us—it simply had to do with who was willing to keep swimming. I was determined to keep swimming.

My MFA program was my earliest literary gathering place. But in the years since, Twitter has become the writer’s town square. There’s something wonderful about this: a democratization of sorts. Twitter has made literary discourse far more accessible to anyone who’s interested in participating; we are no longer limited to the voices of white, heterosexual, highly educated men speaking from the ivory tower of creative academica—we are Black and brown, immigrant and indigienous, cisgender and trans, and everything along each of these spectrums.

When given the chance to advise writers who are just starting out, I tell them to get on Twitter. I tell them to follow both their peers, as well as the more established authors they admire. I encourage them to keep up with the scuttlebut. Follow the heat, develop a presence and voice, and alongside that work, do the writing that needs to get done. I tell them to pay attention—look for the pearls of wisdom that their literary heroes will drop. I’ve come to believe that amidst the never-ending “should I, shouldn’t I” debate about MFA programs, a well-curated Twitter presence and a year or two of community workshops and national conferences are a legitimate low-cost, and often low-trauma, alternative—particularly for those who might not have access to graduate programs due to systemic barriers. I even have friends who use Twitter as a forum for writing prompts, craft exercises in concision.

But alongside the benefits of Twitter, there is something far more troubling at work. All of a sudden, writers have a vocal and quantifiable audience—and boy do we revel in it. The line between public and private has certainly blurred, if not disappeared altogether. There may be no echo chamber more secure than that of an author and their Twitter followers. All I have to do is say “cat person” or “kidneygate” and an impassioned debate rises from the ashes of the most recent discourse. Serious conversations that explore the boundaries of what is, and isn’t, acceptable artistic practice are vital, but what happens when those conversations devolve from high-minded, intellectually curious rhetoric to personal insults and condescension? What happens when there’s a significant, and often unacknowledged, power imbalance between the loudest voices in those conversations? What happens when that power imbalance incites a virtual pile-on—hundreds, sometimes thousands of likes, retweets, and nasty comments from individuals and trolls alike, often directed at one person whom none of these bad faith actors even knows? What if that person looks up to the author they’ve angered? What if, in a more formal setting, they might someday become that author’s student?

Situations often arise on Twitter that almost certainly would be handled differently if they arose in a classroom. Writers who are still cutting their teeth make mistakes, as do all of us. Unspoken codes of conduct are broken, bad assumptions are made, boundaries are crossed. All of this is part of the learning process. MFA-alternative classes hire writers with a wide-range of experience to teach, and enroll writers with a wide range of experience as students. And social media allows writers with varying degrees of experience some influence. Essentially, writers of all experience levels are teaching each other, online and off.

But appropriate classroom conduct doesn’t only apply to teachers, of course. In my junior year of high school, I took a course called “Ethics and Religions.” Our teacher encouraged spirited debate. And one day, in the middle of such a discussion I called another student’s opinion idiotic. My teacher immediately stopped the class, told me why my classmate’s opinion was legitimate, and made me apologize in front of everyone, before continuing the conversation. There was no structural power imbalance between myself and that student, but my teacher reminded me of what I’d forgotten in my fervor: decency, respect, and good faith. I remain grateful to him for that moment; simultaneously, I hope I never recreate it.

If we thought of literary Twitter more like the classroom it’s become, we could raise the level of discourse. We could ask ourselves to engage in ways that we wouldn’t be ashamed to engage with our students, or our classmates. It will, of course, forever remain important to have safe spaces, both private and public—to critique, to question, to vent. To be silly, and to be thotty. But it’s also important that our public spaces maintain room for education, for intellectual, literary, and personal growth. It’s important that we refrain from creating those discouraging moments that have an outsized effect. I want to keep people writing, editing, and criticizing, and play a part in their growth in these areas. I want to keep people swimming to the next shore.

No One Likes a Copycat Au Pair

"Ways of Seeing" an excerpt from White on White by Ayşegül Savaş, recommended by Sanaë Lemoine

A Literary TSwift Mashup From Your Wildest Dreams

13 of our favorite Taylor Swift as Books Instagram posts

The Coolest Literary Tattoos on the Internet