What Does Joan of Arc Have to Do to Make You People Happy?

In recent theatrical portrayals, the saint is apparently too fanatical, too calm, too variable, and too steady

Joan of Arc may be a saint, but she’s still not good enough — at least in the theater community, where she has made repeated appearances in the past few years. The teenage warrior has been the subject of a foot-stomping rock musical, a lengthy drama, and a familial tale told through the eyes of her mother. But none of these portrayals of the Maid of Orleans have satisfied critics. Each of the productions earned middling reviews claiming the portrayal of the teenage soldier wasn’t good enough. Something was missing. Sometimes they couldn’t even articulate what it was.

A skeptical audience is nothing new to Joan of Arc. In the 15th century, after hearing voices in her family’s garden, she embarked on a journey to see the French crown prince, Charles of Valois, claiming that holy visions were commanding her to lead the country’s army against the occupying English. Though the Dauphin (perhaps out of desperation) took her seriously, suspicion dogged Joan and her visions, eventually to her death. Following a successful Siege of Orleans, Joan, who was praised by the French and stood alongside Charles when he was crowned King of France, was captured by the Burgundians at Compiègne and held captive. She was then charged with more than 70 crimes, including witchcraft and dressing as a man. Steadfastly defending her innocence, Joan was found guilty of heresy and burned at the stake.

Joan’s story seemingly provides the perfect origins of a thrilling drama. Religious devotion and fanaticism, military battles, imprisonment and an unjust trial should make for a riveting night at the theater. But the three wildly different portrayals apparently failed to do her justice. In one show, she wasn’t religious enough, according to (mostly male) critics. In another, she was too devoted to her cause. In one she was too much of a fanatic, and in another she was too steady and calm.

Joan’s remarkable achievements are seemingly easy to dismiss when she is too passionate or too calm, too masculine or too feminine. Joan of Arc: Into the Fire was discarded as a boring production, despite its pulsing rock numbers and athletic choreography, and Joan’s certainty in her ability and cause were subject to criticism. Ben Brantley wrote in The New York Times: “This is someone who proceeds without reflection or internal debate, and who knows she’s right no matter what anyone else says. She is, in other words, a fanatic, which is a scary thing to be these days.”

By contrast, Condola Rashad’s Maid of Orleans in the 2018 revival of George Bernard Shaw’s Saint Joan was criticized for being too serene. Jesse Green wrote in The New York Times: “Ms. Rashad’s Joan is always relaxed, never riled or cowed… A hero and genius she may be, but somehow also inert: not much different from a statue if it were blessed with leadership abilities.” Green did, however, remark that the production “does have the salutary feminist effect of highlighting competence instead of hysteria.” Then again, perhaps Rashad was too hysterical. The Hollywood Reporter, after praising Rashad’s male co-stars, wrote that the star “never quite gets a handle on the role, changing her demeanor and attitude from one scene to the next.” Like Hillary Clinton — too stalwart through an 11-hour grilling before the House Select Committee on Benghazi, too passionate in declaring racism “deplorable” — Joan of Arc offends both in her calm demeanor and in her emotion.

Waiting on the Floor for God

“Joan of Arc Sits Naked in Her Dorm Room” by Rachel Engelman, the prize-winning story selected by Jess Walter for Selected Shorts 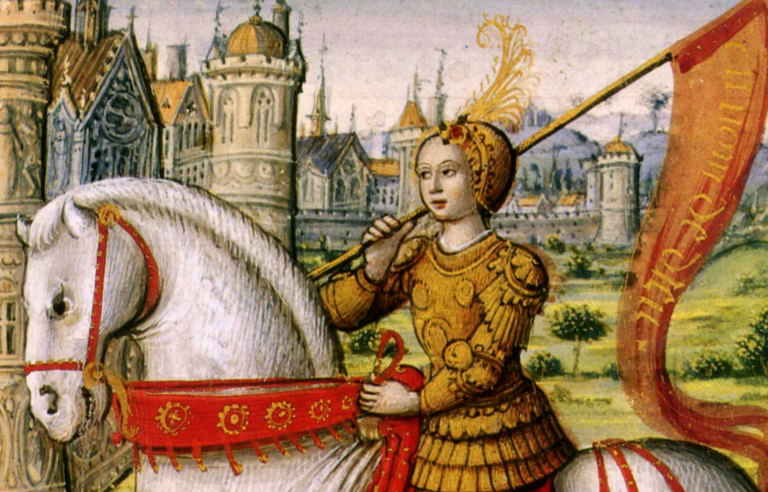 A mother’s point of view dictates Mother of the Maid, which is playing at The Public Theater with Glenn Close starring in the title role. Jane Anderson’s script focuses on Isabelle, Joan’s mother, and her reaction to her daughter’s reluctant admission that she is “having holy visions, Ma.” Joan, first introduced as a surly teenager resisting her mother’s attempts at matchmaking, is seen through Isabelle’s fierce maternal protection — that inspires her to walk more than 300 miles to visit “Joanie” at the Dauphin’s castle — and her bewildered admiration of Joan’s ascension to being a religious symbol. Interestingly, Anderson’s script fuses the religious and the sexual in a way unseen in the previously mentioned plays. Many critics hardly took note of this Joan, though, choosing to focus on criticizing the script for its uneven tone and praising Close’s performance for its devotion and ferocity. As David Rooney wrote in The Hollywood Reporter, “Matthew Penn’s handsomely appointed production has one affecting interlude close to the end, when Isabelle is granted access to Joan’s cell. She tenderly bathes and dresses her daughter, cradling her with comforting words before the convicted prisoner is torn from her arms to be executed.” Isabelle’s maternal anguish — feminine and pious — was more palatable than Joan’s tragedy, which resulted from her courageous attempt to move beyond the traditional role of a young woman.

Joan was burned at the stake in 1431, and these dramatizations of her life were performed in 2017 and 2018. But despite the many centuries that have passed, little seems to have changed. No matter how much she accomplished, or how eloquently she made her case, the teenage warrior has not been heard. Watching these productions, I kept thinking of the Presidential debates and the criticisms lobbed at Hillary Clinton. Whether a woman is a military commander, a religious symbol, a political inspiration, or simply the most qualified person to do a job, she is unable to prove herself worthy of the respect of a patriarchal system evaluating her performance.

Twenty-five years after she was burned at the stake, Joan was tried again posthumously, going on to earn status as a folk saint. It wasn’t until 1920 that Joan of Arc was declared a saint of the Roman Catholic Church, after much resistance. It took almost 500 years for the Maid of Orleans to be recognized by the church, but her story cannot seem to find a welcoming audience. No matter how it is told, be it edgy rock music or old-fashioned drama, Joan’s accomplishments are lost in the presentation of the story.

Joan steadfastly defended what she believed to be right and true, but her words were lost in the seemingly infuriating impression she made on the men judging her, who (among other infractions) were angered by her wearing military clothes and charged her with dressing like a man. We have not, as a society, moved beyond caring more about a woman’s clothes and demeanor than her principles. Consider the absurd recent slam on Alexandria Ocasio-Cortez’s suit, or the way Dr. Christine Blasey Ford, testifying before the Senate Judiciary Committee about an incident of sexual assault by Supreme Court nominee Brett Kavanaugh, was described as “pleasing” and “attractive” by Senator Orrin Hatch. Or consider the people who told Hillary Clinton she should smile more after she defeated Donald Trump in the presidential debate. It’s the same story in entertainment; sexist commentary packed reviews of the first installment of the Wonder Woman franchise, along with complaints of failed expectations, and meanwhile some observers criticized a newly-revamped children’s cartoon heroine for lacking sex appeal.

A long time has passed since Joan was recognized, and even longer since she was killed, but it appears that no matter how she, or any female hero, appears to the public, Joan’s destiny is to be deemed unsatisfactory — much like women seeking power today. Even being a saint and a hero is not enough.

Who Will Feel Secure Because of Your Insecurity?

Io sono mia/I am mine

And guess what? It ends badly