Why We Turn to Jane Austen in Dark Times

Austen may have traded in happy endings, but her work has steel at its heart

The coming year looks like a busy one for Austen fans. In the U.K., at least three novels are scheduled to be published based on her life or inspired by her work. On the big screen, there’s a film adaptation of Emma out and a new television version of Pride and Prejudice coming soon.

Even for a writer who has barely been out of print in her 200-year career, this is a lot of attention. What’s driving it? Could it be that we turn to her with a special kind of hunger when the world seems particularly grim?

History suggests that might be so. In the First World War, special cheap editions of Austen’s books were printed for soldiers to read in the trenches, and when the fighting was over, they were prescribed to shell-shocked veterans as a kind of literary therapy. The stable, orderly world in which her characters spar and flirt seemed particularly suited to heal and soothe shattered minds.

Twenty years later, the comfort she offered was just as appealing. Between 1939 and 1940, as Britain went to war again, sales of Pride and Prejudice tripled. Winston Churchill, snatching a rare moment of downtime from leading the fight against fascism, finished Pride and Prejudice with a wistful envy for the idyllic, untroubled world he found there: “What calm lives they had, those people!”

Making peace with novels about quips and romance 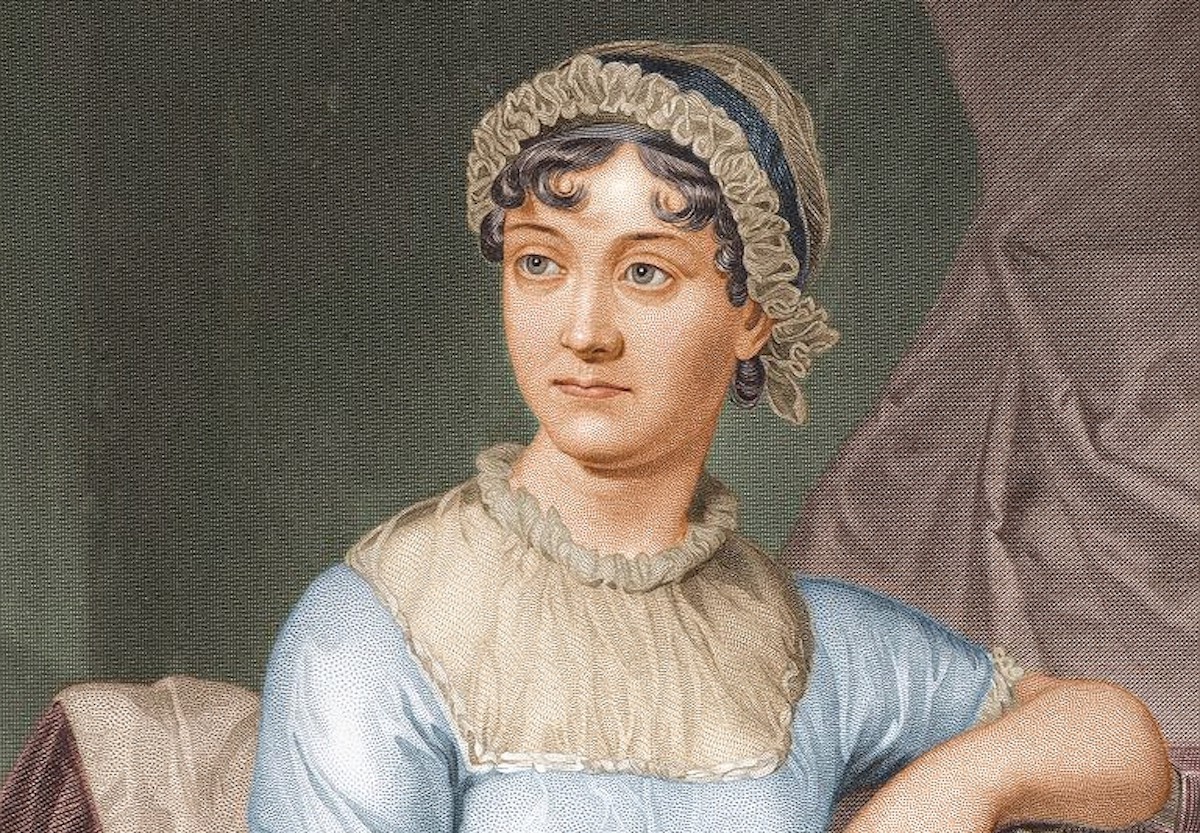 Virginia Woolf agreed. You would never know from Austen’s writing, Woolf observed in 1940, that for nearly all her life, Britain was engaged in a bitter ideological conflict, fought on a global scale with a huge cost in lives. The Napoleonic Wars, Woolf argued, made little personal impact on those who did not fight in them. Austen did not know what it was like to throw herself to the ground, as Woolf was later obliged to do, in a terrified attempt to take cover from an enemy bomber. Horror happened somewhere else.

Austen’s insulation from the wars of her own time, it was suggested, made her all the more attractive to beleaguered readers suffering under the inescapable perils of twentieth century conflicts. They could retreat into her books safe in the knowledge that they would find nothing there to remind them of their current fears and anxieties. Her work was a safe space where they could give themselves up to all the pleasures Austen so brilliantly delivers—her wonderful characters, her sly and supple prose, her wit that so unfailingly hits the spot—and of course those gloriously satisfying happy endings.

There’s no doubt that Austen’s skill in creating a fully-realized world into which it is easy to escape was indeed a powerful part of her appeal—and one that has long outlasted wartime. I’ve often turned to her in times of trouble—and always found her writing to be a very effective way of raising the spirits. I can never read Elizabeth Bennet’s tussle with Lady Catherine de Burgh without feeling exhilarated, and the moment when Anne Elliot and Captain Wentworth finally come together always makes me smile with relief that they didn’t mess it all up again.

Austen described this as her “light, bright, and sparkling” mood—and when you’re looking to escape from a reality that feels oppressive, it’s exactly what you want.

But I’m not sure it’s the whole story—or that it does justice to the true nature of her appeal.

I don’t think we continue to turn to Austen because, unlike us, she was protected from the capricious miseries of life. On the contrary, I’d argue that her power to connect with us in hard times arises not because her retired life shielded her from grief, pain, and fear—but because she knew very well what it was like to feel vulnerable, exposed, and anxious about the well-being of those she cared about.

I think it’s this experience that gives Austen’s writing its muscularity and strength. We wouldn’t return to her again and again if all she had to offer us was an agreeable candy-colored fantasy. There’s a toughness in Austen that tempers everything she writes, even her lightest and brightest moments. It isn’t always pretty, but it’s an inescapable part of who she is. It offers an altogether more bracing prescription of how to respond to terrible events—and is, I think, a product of her constant exposure to a steady stream of human tragedies.

Jane Austen didn’t need to experience warfare first-hand to look death in the face. She saw plenty of that at home. Even for middle class families like her own, daily life was an endless war of attrition against illness and annihilation. Everyone was a potential victim—her sister Cassandra’s fiancé died suddenly at 29—but women were especially exposed. Pregnancy placed a woman squarely on the front lines of the struggle for survival, and the casualty rate was high. Three of Austen’s sisters-in-law died in childbirth, two in their eleventh confinements. It’s no surprise that Austen’s books are haunted by dead mothers; Anne Elliot, Emma Wodehouse, and Georgiana Darcy have all experienced this loss. Everyone had a black dress in their wardrobe and all too often was obliged to put it on.

Austen’s response to this remorseless toll of mortality was uncompromising. She refused to give in to misery or hopelessness, cultivating instead a steely bravado that even now has the power to shock. Her remark on hearing that a neighbor had miscarried—“I suppose she happened, unawares to look at her husband”—still makes you catch your breath.

It would be easy to dismiss this as heartlessness—and indeed, there is a merciless quality in Austen. Her happy endings are amongst the most compelling in literature, but she has no qualms in dispatching less favored characters to truly terrible fates. Think of Maria Rushworth consigned to a lifetime of exile with the appalling Mrs. Norris.

Unlike so many of her peers, Austen has no time at all for sentimentality. The world is a cruel place, she implies, but we cannot allow ourselves to be destroyed by it. It may be necessary to ration your sympathies, if you’re not to be engulfed by misery.

In Persuasion, she has no patience with Mrs. Musgrove’s rose-tinted recollections of her dead sailor son, tartly reminding us that the “poor Richard” for whom everyone is now lamenting, was when alive merely “thick-headed, unprofitable Dick Musgrove” whom nobody much cared for. His mother’s “fat sighings” are, she suggests, really nothing more than self-indulgence.

What Austen really prizes is resilience. All her favorite characters display it. Sense and Sensibility’s Marianne comes closest to giving into despair, but even she finds the courage to claw her way back to a chastened resignation of her lot. We cannot afford, Austen suggests, to allow ourselves the bitter pleasure of surrendering to terrible events. We need to find a little iron in our souls if we’re not to be crushed by the horrors the world throws at us.

Austen’s coolly pragmatic attitude to the management of despondency doesn’t make me love her any less. I can rejoice in the escape she offers from the pressures of a hostile world; but I can also be fortified by the self-discipline she insists upon as a means to survive them. The tough love she advocates can be just as consoling in its way as the light, bright and sparkling comfort that’s so easy to enjoy.

The Hulu adaptation of Celeste Ng's novel wrestles with questions of appropriation, in art and life

7 Novels Set During the COVID-19 Pandemic

A Doctor and a Scientist Write to Remember

John Okrent’s “This Costly Season” reckons with illness, caregiving, and the trauma of recollection

The Flexible Reality of Interactive Fiction Brought Me Agency During Lockdown