How to Write a Fiction Podcast

Interested in writing the next War of the Worlds or Welcome to Night Vale? Here's what you need to know

There are things that audio drama—scripted fiction with no visual element, usually distributed via podcast—can do that no other medium can. Sound creates a unique bond with an audience, a sense of intimacy. There’s a specific rhythm to it. Characters’ journeys become sharper, horror becomes more terrifying, otherworldly vistas can be created in the mind’s eye. Writing for sound allows me to tell stories that wouldn’t work as a film or novel. And if you’re used to writing solely for text, you might want to try it.

I say this as someone who, a long long time ago, had a secret, kind of sad dream of becoming the next Ursula K. Le Guin. (This dream isn’t completely dead, just dormant as hell.) But listening to old episodes of Orson Welles’ Mercury Theater on the Air, as well as the then-just-starting Welcome to Night Vale, demonstrated that sound could be a uniquely captivating way to tell stories. And there’s a whole bunch of exciting stories being told in audio fiction. Podcasts like The Bright Sessions and The Truth are doing some really cool things. And outside of the unique power of audio drama, they’re can be a good fit logistically. An fiction podcast can find an audience more easily than a short story or novel, and can be less complicated to produce than a TV show or web series.

Have you been sold on writing an audio drama? Great. Congratulations. Welcome to the not-that-wide world of aspiring sound titans. Now for the bad part. Actually writing for audio drama can be really really difficult. And I’d know, as the co-creator of, and writer behind, Archive 81, a fiction podcast about horror, loneliness, family, and creepy tapes. Every time I brainstorm a new season with my lovely and talented producing partner Daniel Powell, every time I start a script for a new episode, every time I try and think of something engaging for a character to say… I still struggle to make the best possible use of the audio medium. It requires a different mindset, a different toolbox.

So here are some tips and tricks and stray flotsam I’ve picked up from writing a whole bunch of fiction podcasts. They’re not a roadmap or a bible, just things I think you might want to consider if you’re moving from writing prose or film to writing audio drama. Because writing audio drama might be uniquely challenging, but it’s also uniquely rewarding. Remember how I wrote at length about the power of audio drama? Yeah, I didn’t lie. Anyway, before I get too gushy, here are the tips and tricks.

Before anything else, think of SOUND.

This is the big one, the mountain spring which every one of these dumb tips flows. An easy way to think about audio drama is as television without pictures, but just writing a television script and expecting it to make a good fiction podcast is a terrible plan. The audience won’t know what the heck is going on and the whole thing will sound boring and lifeless. This is a super obvious point, but it bears pointing out: TV and film are visual mediums, audio drama is a sonic medium. So when you brainstorm your cool new fiction podcast… think of how it’s going to sound.

Now, what does this mean in practice? It means making your characters, your setting, and your plot sonically interesting. Maybe you want to tell a story about a daring team of interstellar archaeolgists who gradually uncover the disturbing secrets of a long dead (or are they???) alien race. Cool! But it’s probably not going to be that cool if the archaeologists are trying to decipher an alien script. Consider instead having the aliens be a sightless species, perhaps leaving “singing” crystals that the very attractive archaeologists, accompanied by their silent robot pal, have to decode. Fun! And it gives you the opportunity to wow the listener with interesting, engaging sounds. That’s exactly what you want to do when you’re thinking of the overall plot of your audio drama.

Before you start writing, think of sounds that interest you, and let those shape the arc of your audio drama. When I was writing short stories, I often thought of a phrase or sentence that stuck in my mind, and I’d write my stories to get to those sentences. A screenwriter might think of a monumental image that they’d like to get to, and construct the plot to highlight that image. You can do the same with audio. Whether it’s a father coldly describing arcane rituals into a tape recorder, or eerie banjo music playing over a car’s stereo, I’ve found that thinking of interesting sounds, interesting sonic textures, and altering the plot to get to them, is a useful way to write.

Earlier, I gave the archaeologists a silent robot pal. But having the robot be silent probably isn’t the best idea in an audio medium. Instead, let’s give the robot a static-y voice, dripping with disdain. Or (if you’re not scared of being sued by Disney) let them respond to various situations with beeps and whirrs that all the other characters can inexplicably understand. Point is, give each of your characters unique, distinctive voices. When writing, think of what each of your characters sounds like, what separates them sonically from the other characters. This doesn’t just apply to archaeologist robots, this applies even if you’re doing a realist drama set in a coworking space in Gowanus. With no visual or textual context, it can sometimes be tough for an audience to distinguish between two characters when they sound similar. So… don’t let your characters sound that similar. This is about dialogue, but it’s also about natural voices: a more diverse cast (in gender, age, accent, etc.) will automatically sound more distinct from one another. That also has the added benefit of making sure your script isn’t filled with boring twenty-somethings with the exact same background. Also, when in doubt, write robot characters. They always sound cool. 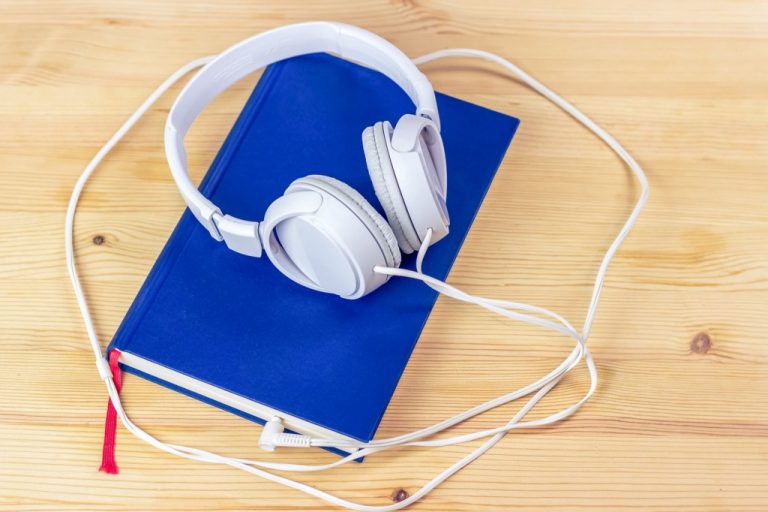 Once you’ve thought of ways to make your plot sonically interesting and your characters vocally distinct, it’s time to make your settings sound-rich. A lot of an audio drama’s sense of place, its worldbuilding, comes from the background atmosphere of a scene. The clatter of a 18th-century tavern, the cold beeps of an alien starship, the background radio and tire squeals of a long road trip. These are the things that make audio fiction come alive in a listener’s mind. So don’t just set your scenes in bog-standard living rooms; set them in places with background noise, places that feel alive. When the listener hears two characters talking, they should also hear the world surrounding them, so think about these sonic textures in the writing process. And give your audience an immediate sense of where they are—either through dialogue (“gosh, this diner sure is crowded”) or better yet, through sound design (SFX: the ceramic scraping and background chatter of a crowded diner).

Before I actually get down to writing, there’s a rule I like to consider: have something that sounds fascinating in each and every scene. However engaging the scene is on a plot and character level, don’t forget to have something going on that uses the potential of the audio medium. A kid walking by with a blasting boombox, the unearthly static of an alien device, the resonant hum of a record player that’s being turned on… the specifics don’t matter. It’s a useful challenge that helps me prioritize sound when I write scenes.

Let your audience’s imagination do the work for you.

Have I mentioned that audio drama is a sonic medium? For some reason, I feel like I’ve mentioned that before. Anyway, because audio drama is a sonic medium, your audience can’t see the weird monster, or 50’s bar, or elegant funeral that you want to convey. Thus, the temptation is to over-describe things visually, either in narration or dialogue. Don’t do that. Your characters shouldn’t spend a minute describing every glistening curve of the monster that’s attacking them or comment on every flying buttress of the church they’re sheltering in. Not only is this cruddy, unrealistic dialogue, it makes for poor visuals. Give your audience just enough information for them to paint a picture in their minds. Have the monster drip viscera onto a tiled floor and cause the scientist to mutter: “teeth, there’s too many teeth,” and your audience will create a monster far more terrifying than you could describe with a thousand words. Yes, different people are going to have different mental images of the monster or sexy interstellar archaeologist or coworking space in Gowanus… but that’s fine! There’s nothing wrong with that.

Read the dialogue out loud to yourself.

This is probably just good advice for whatever medium you’re writing in, but it’s especially vital in audio drama, where most of the information is conveyed in dialogue. If you’re moving from writing short stories and novels to writing audio drama, it’s important to make sure that the dialogue works spoken, not just on text.

Kissing looks romantic and can be described in super romantic ways. However, the audio of people kissing is… kind of off-putting and weird. (Next time you kiss your partner, close your eyes and really listen to the sounds. You’re going to be icked out, as evidenced by this truly harrowing piece of footage.) That doesn’t mean that you can’t write a good romance audio drama, it’s just something to be aware of before you write a climactic make out sesh. Sounds like vomiting, chewing, kissing, etc. will make your audience uncomfortable. This is great if you want to make your audience uncomfortable (I can proudly say that there was a metric shitton of vomiting in Season 3 of Archive 81), but once again, something to be aware of.

I could go on for much longer with all my audio drama advice and hang ups. (I’m leaving out a whole diatribe about narration in fiction podcasting and how to properly write action scenes) The main thing to remember, other than the fact that I most certainly don’t have all the answers and everything I write should be taken with a grain of salt, is to think deeply about sound when you write. To use the specific strengths of the medium to tell your story. Because there are a lot of audio drama stories that can be told, and you should most certainly get started.

How Can Our Mothers Ever Live Up to Our Expectations?

Michele Filgate, editor of “What My Mother and I Don’t Talk About,” on deconstructing the stories we tell about our moms

7 Newsletters That Will Improve Your Writing