Theatrical experience "The Bunker" brings participants into the post-apocalyptic story

One evening in late July, I huddled in a Manhattan basement, battling radioactive creatures and trying to stay alive in a post-apocalyptic world. Afterward, my fellow survivors and I recapped the events over drinks at the karaoke bar upstairs.

For me, who avoids performing in public at all costs, spending time with people lined up to sing karaoke was far more unusual than fighting for survival in a post-apocalyptic dystopia. Despite having never played Dungeons and Dragons or any form of live action role playing, coming together with relative strangers to survive a hostile and dangerous world did not feel that unusual to me. The Bunker—part immersive theater, part live-action roleplay and part tabletop game—felt eerily prescient of my future—and the world’s.

At the beginning of the evening, I was greeted the sidewalk by Ian McNeeley, artistic director of Broken Ghost Immersives and co-creator of the Bunker. Dressed in a hazmat suit, he led me down a steep, narrow staircase into an arts space called Wildrence. After introducing all the participants, McNeeley informed us of our circumstances: following a nuclear catastrophe, the world was uninhabitable and we had been kept in suspended animation for 114 years in a “deferred existence bunker.” Now we were awake—and running out of supplies. For us to survive, something had to change.

The situation felt familiar. There have been enough post-apocalyptic dystopian books and movies released in the past few years for me to read and watch until the real thing actually takes place. And given the current state of the environment, it might not be that long. But this time, I wasn’t reading or watching. I was part of it. Not only that, but I was a member of a group, and our group was in danger. Our bunker was stocked with some rations, but there weren’t enough for everyone and we were running out. There were 13 of us and just six hazmat suits.

I was nervous. I had walked into the room knowing no one, while almost everyone else had come in pairs and groups. I needed to find some allies, and fast. In situations like this, loyalties form quickly and just as quickly broken, and I was curious to see how these relationships would change as the night went on. I expected drama—fighting for survival would inevitably bring out everyone’s primal instincts. The question was: who would betray whom and how deep it would go?

The groups formed. Scattered throughout the room, which featured a couch, a few chairs and a table containing our rations as well as a place to create tabletop crafts, we began to plan. Some people ventured out of the Bunker wearing hazmat suits, seeking the supplies we needed to survive as well as fending off attacks from nearby bunkers. (The hazmat suits, as well as the supplies and most other important props, were represented by cards that we carried from place to place.) Different groups of survivors were scattered throughout the wasteland, communicating through electronic tablets. (The tablets were real.) One particularly hostile group informed us that if we did not meet their demands, we would be violently attacked. Reading threatening messages sent electronically, with no idea who it was writing them, was jarringly familiar, but interacting with the other survivors raised the stakes and brought us together. Nothing is more unifying than a common enemy. Even an epic catastrophe hadn’t changed that.

I had seen all of this before. I’d read it, too. But inside a small underground room, sitting next to fellow survivors on the touch, watching their faces and hearing their voices, was entirely different. It was more intimate, more dangerous—and I was a part of it. My actions could affect how this story ended and who survived. Did I really want that responsibility? And if I didn’t, could I really absolve myself of it?

Periodically the lights went out and the shelter’s artificial intelligence, DeBUNK, informed us that another day had passed, instructing everyone to consume another serving of the rapidly dwindling rations. Even though the rations, like everything else in the game, were extremely low-tech—the entire experience in the Bunker relied on one costume, tabletop game pieces, the tablets, and one computer—the atmosphere became more and more intense. As we lost members to mutant monsters and others returned wearing signs that proclaimed “HIDEOUS MUTATION,”  informing us they now had missing limbs or newly-sprouted tentacles, the loss hit me hard.

I kept postponing my own venture out of the bunker, though I wasn’t entirely sure why. Being responsible for other people’s well-being made me cautious, and instead I found myself drawn to the notes that other “survivors” had left behind, most of them correspondence between two people. Another participant and I pored over them, seeking clues about how the disaster took place and how to survive. What had happened? Who had betrayed whom? What was this “goop” we so desperately needed?

Even in a make-believe apocalypse, I thought, I still want to tell stories. Sure, we might die, but I want to know why.

The clock ticked on, and the stakes were raised again and again. The more the risk, the more personal it became and the more uncomfortable I became. As I finally ventured outside (into the building’s hallway), I reminded myself that this was all a game but I was apprehensive. If I failed, who else would suffer? And would anyone help me, or would I be left to be eaten by the radioactive dogs?

How Immersive Theater Is Bringing Intimacy Back to Entertainment

Instead of passively observing the story, audiences at these shows are swept up in human interactions 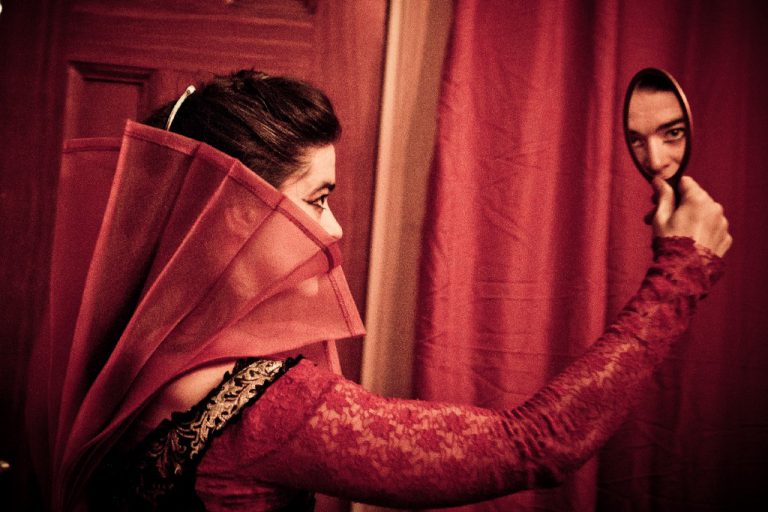 The hallway hadn’t transformed, but the atmosphere had. Emotions were high as McNeeley, still dressed in his hazmat suit, informed everyone of their fates. Standing close and maintaining intense eye contact, McNeeley told me I had succumbed to insanity after witnessing the destruction throughout the world. I felt my stomach sink. Even as I thought, “That sounds about right,” I felt a sense of loss and even grief. All of the courage I had worked up to leave the Bunker had been for nothing. If I had stayed, I would have survived.

Rescued by pure luck,  I rejoined my teammates for our final moments. Time was running out and we were about to lose power—and another Bunker was planning to attack us. I thought fights would break out, but everyone worked together peacefully as we evaluated our options. Why did I expect fireworks? I wondered. Perhaps I had been conditioned by entertainment or even American government to expect dramatic power struggles when the danger was imminent. Instead, even when two people of our group defected and attempted to run away with our getaway van, the group remained calm. There was no shouting or screaming, but the feelings of betrayal were real, as was the sadness when one member of our group was defeated in battle with a radioactive monster.

In this Bunker at least, peaceful, democratic decision-making could take place. If the apocalypse comes, it will probably feel a lot like this, I thought, listening to everyone talk. Participating in the Bunker didn’t include music, special effects or any real danger, but it was the lack of effects that heightened the tension and made it more real. In an actual dystopia, there wouldn’t be dramatic music or closeups of people as they give climactic speeches. There wouldn’t be costumes or gas masks; we’d probably all be dressed like we were tonight. In movies and books, you know when it’s the culminating moment, but here there was nothing to indicate that. It was up to ourselves to evaluate our decisions and their consequences. The weight of these decisions snuck up on us slowly, but there was hardly time to reflect on them as we continued to fight for our survival.

This is far more realistic than any book or movie, I thought. We’ll only know how important our decisions are after they happen. A newscaster isn’t going to say, “This is what will cause the end of the world” or “The apocalypse begins today.” We’ll have to stop and think about what’s happening, weigh the consequences and make our choices—actions that often feel rare in a 24-hour Twitter-driven news cycle.

The night concluded with DeBUNK narrating how our story ended. Sitting together, listening to the story was charmingly old-fashioned, reminiscent of telling stories around a campfire—despite the story being told by a disembodied electronic voice—a throwback to the past but also potential foreshadowing of the future.

The Bunker left a lot to unpack, so our group climbed the stairs to adjacent karaoke bar to recap and discuss. Some were cheerful and some were unsettled. I was in the latter category. I joked that the group had been almost too mature and polite, and the lack of drama or power struggles resulted in the calmest dystopia I had ever heard of. I wondered if I had stumbled into a remarkably mature LARPing community, or had the state of the world caused everyone to take these situations more seriously.

Maybe the Bunker should be required for everyone as preparation for the future. The past three years have inspired so much fear about where the world is heading, but I hadn’t seriously considered how I would react if I was actually fighting for survival. The night had shown me some of what I could do, and what I was scared of. It also showed me that what could be my last day on Earth looked and sounded a lot like today did. It wasn’t going to be drastically different overnight—and because of that, it could sneak up without me or anyone else noticing.

Was The Bunker fun? In another time or political climate, I would answer yes without a doubt. Right now I would describe it as useful.

What Does Accountability Look like in the #MeToo Era?

These Shoes Were Made for End Times

Excerpts from "After the Rapture," a novella by Nancy Stohlman

The Most Exclusive Cruise in the Apocalypse