In The World of Tony Soprano, What Kind of Capitalist Are You?

The long-awaited prequel to The Sopranos, The Many Saints Of Newark, will be released in theaters and on HBO Max (where it will be available for 31 days) on October 1, 2021. This news has made fans rejoice; despite the fact that The Sopranos ended its run over 14 years ago, this television show about the deterioration of America, mental health, strained and extremely difficult family relationships, trust, betrayal, and the decline of organized crime, has retained its cultural relevance, especially considering the current state of the world.

Tony Soprano, the show’s star, is a lazy, depressed sociopath who always gets what he wants. Tony’s litany of sins is too extensive to recount, but his therapist summed it up best as: “You’re not respectful of women. You’re not really respectful of people.”

No one seems able to escape Tony’s orbit; characters repeatedly double down on organized crime rather than disrupt their cozy lives. See for example Christopher Moltisanti’s decision to turn on Adriana rather than follow her into witness protection. Recall Vito Spatafore’s decision to return to mob life rather than work a nine-to-five. Consider Carmela’s entire marriage.

The psychological burden of bearing this moral rot is akin to the misery the average person experiences every day under late capitalism’s brutality. Like the characters in the Sopranos, we are all negotiating ways to survive a soul-crushing economic system from which there seems to be no escape.

Here’s what your favorite character says about the deal you’ve made with capital and the depression that comes with it.

Carmela resents Tony for controlling the money and therefore her. This chiefly manifests in her rage at Tony’s affairs. In objecting to his adultery, Carmela displaces her disgust with Tony’s lifestyle onto something at least loosely within her control. Tony’s failure to meet Carmela’s emotional needs is a real problem, but it’s also the only problem she’s willing to tackle because it doesn’t seriously threaten her livelihood.

If you’re Carmela, capitalism has provided you with a privileged life, but one with many strings attached and little emotional fulfillment. You don’t like it, but you can’t break free from your patriarch, boss, or other wealthy benefactor. So, you release your anger through small acts of rebellion and emotional outbursts.

Meadow’s well aware of the ethical problems with Tony’s income, and this recognition manifests as embarrassment and defensiveness. When her boyfriend Finn tells her he’s afraid of Vito, Meadow offers a bizarre pseudo-intellectual justification of the mobster’s aggressive behavior. She deploys a similar smokescreen after Jackie Jr’s funeral when his sister coldly declares that Jackie’s fixation on joining the mafia was what cost him his life. This open acknowledgment of organized crime, in front of an “outsider” no less, causes Meadow to snap, although Meadow is surely aware that Tony was involved in Jackie’s execution.

Meadow chooses petulance when confronted with the truth about her family, which is particularly tragic because she clearly knows better. In the end, she marries a mobster’s son, binding herself more tightly to the world she seems ashamed of.

If you’re Meadow Soprano, you’re an ambitious, capable PMC striver who’s embraced the random good fortune of being born in the imperial core. Any real challenge or criticism feels like a personal attack, and so you stick close to those who understand.

Anthony Soprano Jr. is the spoiled, lazy, exceedingly sensitive breakout star of the show. The relatability of his melancholy, his difficulties finding and keeping work, his estrangement from his father, and his overall inability to function has made him popular among young people discovering the show today.

After an agonizing breakup, AJ develops a hazy countercultural politics. He frets about Israel/Palestine, United States wars in Iraq and Afghanistan, fossil fuel dependence, and the poems of “Yeets”, becoming politically engaged in a way that is emotionally paralyzing and unconstructive. His only option is to criticize his family’s indifference to issues that have little influence on their affluent lives.

AJ is the spitting image of today’s moderately politicized millennial, born into a collapsing empire with little motivation to organize for a better world. If you like AJ, you’re a disorganized radical, someone dismissed and ignored by friends and family despite being correct regarding how fucked up it all is. You cope by looking at Twitter, endlessly doom scrolling, incapacitated by the horror of it all.

Week after week, Dr. Melfi helps Tony improve his craft by making him more emotionally stable and strategic, allowing him to become a better mobster. Tony’s life of crime, the true source of his turmoil, is irrelevant to his treatment, and in fact, therapy allows him to justify and legitimate his choices. Only seeing Tony from afar, Melfi has the fewest reservations about working with him. For her, he’s a thrilling case study of a dangerous, troubled man.

Melfi is a comfortable, bourgeois cosmopolitan who is materially funded by organized crime. If the good doctor is your favorite, then you’re like a comfortable western academic, so abstracted from the actual struggle that criticizing society is a purely intellectual exercise.

Christopher, Tony’s “nephew,” is Tony’s hand-picked successor—something both men come to regret as their relationship deteriorates. Christopher has dreams beyond mob life, dreams of working in the movie business, but he’s a made man, and once you’re in, you’re in all the way. In season six he films his first movie. It’s a supernatural revenge slasher with a staggeringly heavy-handed dig at Tony Soprano, who is so oblivious to Christopher’s feelings that he doesn’t see the parallels until Carmela spells them out.

Unlike many other characters, Christopher can’t passively benefit from Tony’s brutality while looking the other way. He actually carries out the violence that fills the boss’s pockets, then waits for the spoils to trickle back down. And it’s no bed of roses. Christopher visibly suffers in his career as a mobster, constantly enduring abuse, mockery, and exploitation even as he works his way up the ranks while developing serious problems with substance abuse. Nevertheless, Christopher never actually gives up on the mob, fantasizing about leaving but systematically sacrificing everything good in his life to stay in.

No one respects or understands his attempts at sobriety, and it’s a lapse in that sobriety—provoked by other mobsters’ constant taunting—that gives Tony the opportunity to kill Christopher outright, for no other reason than that Christopher has become a liability.

You might empathize with Christopher because you yourself are cracking the whip for capitalism, and it’s killing you. Maybe you’re a manager or corporate executive, or maybe you’re a cop or soldier; either way, as little as you’re happy with your station and as much as it’s ruining your life, you can’t quite give up the power it brings you.

Paulie “Walnuts” Gaultieri is probably the most reliable member of Tony’s crew, widely respected for his physical fitness and sense of humor. Throughout the series, things pretty much go okay for him.

If you’re like Paulie, you’re a pretty cool person who knows how to take it easy. You’ve basically got things figured out for yourself, so keep on keeping on.

We’ve been pretty harsh to Tony’s entourage (and maybe to you), but it’s not like this shitty situation is their (or your) fault. Each character’s coping strategy is very relatable because coping is all they’ve been taught to do. Cultural theorist Mark Fischer argues that capitalism not only causes political instability but also psychological breakdowns and crises. Our entire political-economic system is designed to cause alienation, stress, and precarity while telling us our depression is as natural as the weather. None of us can extract ourselves from this psychic quagmire on our own – just when we think we’re out, it pulls us back in, because as awful as Tony is he also happens to be family.

The characters of the Sopranos are certainly flawed, but those flaws aren’t why they’re trapped in Tony’s orbit. A more principled Carmela might lash out more or less or be a more conscientious realtor, but she’s still got to take care of her kids. A better-read AJ might have a sharper analysis of world events but not simply bootstrap his way out of financial dependence or mental illness. The bottom line is that all these characters are acting rationally because if any of them stood up for themselves they’d be standing alone. The same is true for most of us; if you spoke up against your shitty boss, wouldn’t you just get fired? If you tried to stop your neighbor’s eviction, wouldn’t you just be jailed? You know it’s bad, and you can see it fucking you up, but it could be even worse, so shouldn’t you keep your head down?

Books That Read Like a Club Scene From the Sopranos

Tice Cin, author of “Keeping The House,” recommends literature that thrums with the energy of a crowded room 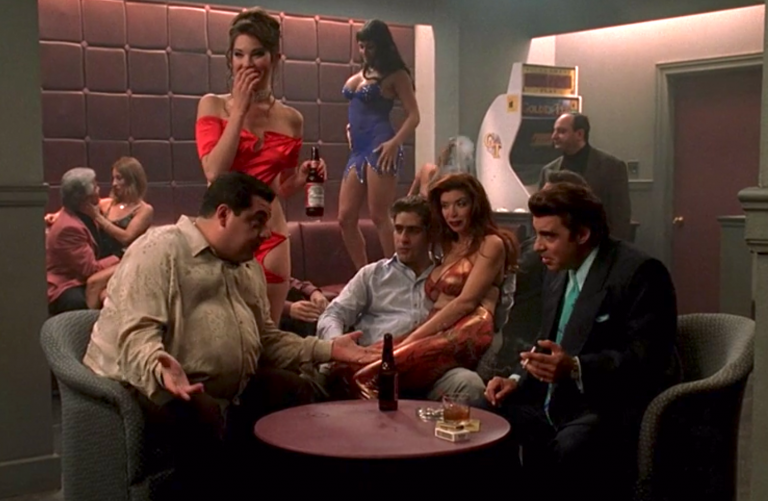 The problem isn’t that any of them, or any of us, are too dumb or weak or callous to escape their dependence on Tony. The problem is that none of them talk about it, build bridges to each other despite it, organize against it.

What if they did?

What the resources of someone like Carmela were channeled into mutual aid? What if the institutional expertise of someone like Meadow was utilized in a union drive? What if the AJs of the world shared their consciousness with comrades who could help them act on it? What if the theoretical knowledge of our Doctors Melfi was channeled into a movement that could act on it? What if every Chris you know just, well, quit, and put his skills and wealth to work for the good guys for once?

All of these people need each other because escaping exploitation—from either end—can only be a collective effort. None of the Sopranos’ characters could take out the boss on their own, but they all could if they worked together.

Books That Read Like a Club Scene From the Sopranos

Tice Cin, author of "Keeping The House," recommends literature that thrums with the energy of a crowded room

We Cloned Charlotte Brontë from a Lock of Her Hair, and Chaos Ensued

We've acquired a script for the final Avengers movie, and it's... surprisingly existentialist