We Cloned Charlotte Brontë from a Lock of Her Hair, and Chaos Ensued

A ring containing a lock of Charlotte Brontë’s hair was recently discovered on an episode of Antiques Roadshow that was filmed in northern Wales. The next step was obvious:

We were so preoccupied with whether we could do this, we didn’t stop to think about whether we should. Below, a few scenes from Brontësaurus Park.

Dr. Alan Grant slowly stands to look out of the Jeep, while Dr. Ellie Sattler stares at the strip of lace she is holding, marveling. “This type of embroidery hasn’t been done since the Victorian Period,” she says. “This thing—”

Grant stops her, grabbing her by the head and turning it to make her see what he’s seeing. Sattler slowly rises to her feet, mouth agape. There, in the near distance, they see what appears to be a living, breathing Elizabeth Barrett Browning sitting at a table not too far from them, hunched over and scribbling in a notebook. “It … it’s a writer,” gasps Dr. Grant.

“No, no, not a novelist at all,” Alan reassures. “Just a poet. See? Look at the line length. We’re perfectly safe.”

Now from the Jeep rises another of their party. It’s MFA candidate Ian Malcolm. Staring at Browning, he mutters to himself, “He did it. That crazy son of a bitch did it.”

Grant and Sattler move closer to Browning, shielding their eyes from the sun, trying not to disturb the writer.

“We’ve got a Brontë,” replies Hammond. Grant is feeling faint. He sits on the ground.

Hammond strides out in front of them, and, looking out over the rolling fields and forests dotted with small cafes and parchment and quill shops, declares, “Dr. of Comparative Literature Grant, Dr. of Victorian Literature Sattler … welcome to Brontësaurus Park.”

Nedry, an adjunct, tumbles down a hill and into the mud, losing his glasses. It is night, and pouring rain.

“Where are my glasses?” he asks, digging through the mud. “I can’t afford new ones. I’m an adjunct.”

Just then, he hears a hooting. He sees a figure leap behind a tree, then more hooting. The figure flashes by again, and still, more hooting. Nedry looks around in a panic. Who is it?

“Oh. Uh, nice girl. Nice writer,” he says, trying to stay calm. “I thought you were one of the Brontës. But you’re not so bad. No. Okay. Run along. I don’t have any Moleskines for you. What do you want? What do you want, food? I have nothing on me.”

He slowly reaches towards the ground and finds a #2 Ticonderoga pencil.

The woman looks behind her, then slowly turns back to gaze upon Nedry.

“Ah, no wonder you’re without a husband,” he mumbles. “I’m gonna burn your manuscript when I come back,” he declares, before turning to climb back to his Jeep.

But the woman follows. Nedry turns around in fear, and a slow smile spreads across her face: then, she emits a horrifying shriek, as a large Tudor ruff quickly unfurls around her face. She screams, and then coughs a dark liquid all over Nedry.

Nedry claws at his face in a panic, and then stops suddenly, realizing something. With terror in his eyes, he looks slowly down at the white handkerchief he brought with him to diagnose consumption.

It’s just as he suspected. Covered in a spray of blood.

In the distance, through the rain, Tim, the TA, hears it: a subtle boom, boom, boom. If he had to guess, based off of books he’d read, he would guess it was the sound made by a woman stomping in calf-high, side-laced Adelaide boots. The idea is almost too terrifying to entertain. But then he hears it again.

Tim slowly leans over the front passenger seat, staring at the two mugs of mead sitting on the dashboard. For a moment, nothing. And then, across the surface of the mead: ripples.

Something crashes against the buggy with a loud bang, and they all leap back in horror: through the torrential rain, they see the gore. It’s half a manuscript, ripped to shreds, simply dripping with red ink.

Who threw it? Tim stares out the window and at last, spots it: a single white arm, covered in a pale lace dress glove. Slowly, Tim looks up, up, up, up, and for the first time, at last, we see her in all her brutal glory: it’s a real life, full sized Charlotte Brontë. She turns her head slowly to meet Tim’s eyes.

“What … what did you do with the man who was editing your manuscript?” Tim whispers.

“Reader,” she responds, cocking her head, “I buried him.”

Outside the Jeep, Brontë’s boot comes crashing down into the mud, leaving behind the kind of monstrous footprint you’d usually only see in a museum: a woman’s 6, maybe even 6 ½.

She is looking for Tim. He scrunches into a ball, trying to stay small, but she spots him. Her eye, big and yellow, widens. A symptom of untreated hyperbilirubinemia, most likely. There was only one doctor in the park, after all, and he was needed elsewhere, as the Baker girls had the croup.

Charlotte spots Tim and lunges at the Jeep. Tim scrambles away from her, but there’s not much room in the Jeep for him to move. Stretching towards the car, Charlotte Brontë opens her gaping mouth wide … and says, “I noticed you were alone. Is your family in want of a governess?”

What If Jane Austen’s Mr. Darcy Were a Teenage Steampunk Vampire Platypus?

Our favorite “Pride and Prejudice” variations imagine Darcy as a pirate, dragon tamer, AI, and more 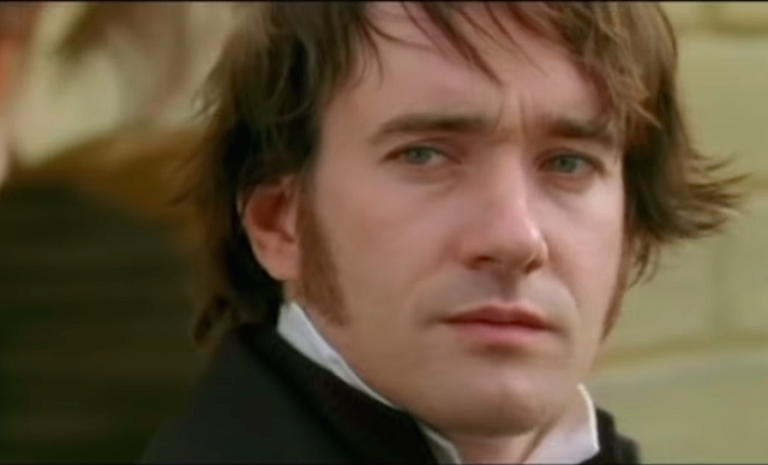 Tim screams and kicks, while she cries that she has considerable experience and could be quite a helpmeet for a man of his stature, and she promises she won’t be a bother as she keeps her mouth shut and does what she’s told and, besides, she doesn’t require much, just room and board and perhaps a pint of scum pie every once in a while.

“Go away!” Tim screams, and kicks at her again.

“I do not think sir,” she says, huffing, “you have any right to command me, merely because you are older than I, or because you have seen more of the world that I have; your claim to superiority depends on the use you have made of your time and experience.”

But she cannot reach him, neither with her words nor with her arms, and so she backs away, sniffing, “Well enough. I care for myself. The more solitary, the more friendless, the more unsustained I am, the more I will respect myself.”

She starts walking away, and then turns back to look at Tim. “I have as much soul as you,” she roars. “And full as much heart.” Then she turns and stomps away.

In her wake, a trail of those horrifying size 6.5 footprints, full to the brim with rainwater. With every retreating step she makes, the water quivers.

An unfamiliar woman—tall, peaceful looking—approaches Dr. Grant and the children where they are resting in their tree perch.

“No, no, it’s okay,” Dr. Grant reassures her as the woman tilts her head back and forth, examining them. “It’s a Gothic. It’s Mary Shelley. She’s perfectly safe. Look, see what she’s holding in her hand? Look at that. It’s a first draft. Can you believe it, Lex? We’re looking at a genuine Mary Shelley first draft!”

Shelley nods, and reaches her long arm up to the tree perch to hand Lex her notebook.

“It is still a work in progress,” Shelley admits. “I haven’t quite landed on my final title.”

A hoard of writers storm past Dr. Grant, Tim, and Lex.

“Tim,” Dr. Grant says, grabbing Tim’s shoulder. “Who are these people? Can you tell us what they are?”

“No,” Dr. Grant says, grabbing her arm. “These are aggressive, living copy editors that have no idea what century they’re in, and they’ll defend themselves and their view of the progressive passive, violently if necessary.”

As the swarm of editors rush down the hill and towards them, the three scramble behind a nearby fainting couch to stay safe and out of sight.

And that’s when they hear it: the all-too familiar boom that could only come from a certain size 6.5 woman’s boot. Dr. Grant peeks over the edge of the couch just in time to see Charlotte burst from the forest. She grabs one of the editors by the throat while the others flee.

“Life appears to me too short to be spent nursing animosity, or registering wrongs,” she hisses.

“And yet,” Charlotte continues, talking over her. “It has been a fortnight since I have sent you my latest manuscript, and have as of yet received nothing in return but your most bitter silence.”

“But—” started the editor.

It is morning now, and quiet. Weeks have passed since the surviving members of the team fled Brontësaurus Park by helicopter. The island is calm, still, mostly unchanged except for a reminder here and there: the torn fence, the ransacked kitchen, the Visitor’s Center where Charlotte fought against Emily and Anne, now in shambles.

We have forgotten how beautiful the island is. Look, here, a quiet stream, bubbling, winding through the forest. Follow the stream: watch it drop off into a waterfall. See the rocks at the base of the fall; see washed up on the muddy banks next to the rocks, a red, white, and blue-striped Barbasol can, torn open, empty. Look: see leading away from the stream and towards the forest, footprints. We thought we had seen horror before, but here, now, staring at impossible size 8 bootprints, we know suddenly that our horror has only begun.

Follow the footprints to just inside the forest, where a gruesome scene awaits: the remnants of what appears to have been a game of whist, violently disrupted, the chairs toppled, the cards scattered every which way. Outside of the wreckage, only one set of boot prints continue: onward, towards the center of the island.

Back at the base of the stream, the Barbasol can spilled open, empty. Crouch down: here, our only two clues as to the can’s previous contents: slivers of a shattered test tube, and a small identification tag, yellow, square, the type used to label scientific specimens.

A small, yellow, square identification tag upon which is typed, simply: J. Austen.

The stories you grew up with, made not at all suitable for children

In The World of Tony Soprano, What Kind of Capitalist Are You?

We've acquired a script for the final Avengers movie, and it's... surprisingly existentialist