Toni Morrison Gave My Own Story Back to Me

The incomparable literary powerhouse, who died this week, showed me how to stop letting white people dictate the shape of my narrative

This piece was originally sent to subscribers of Sweater Weather, a newsletter about literature, culture, and feelings.

Last week, I went to the local indie theater to see the new Toni Morrison documentary. I was attending with a friend, but he had gone to use the restroom and so I was left in the quiet dark waiting for the trailers to begin. We had arrived early because the theater was hosting a talkback discussion following the screening, and we anticipated that there would be a bit of crowd.

Putting Together the Pieces of Toni Morrison

Filmmaker Timothy Greenfield-Sanders shows the author’s many facets in his documentary “Toni Morrison: The Pieces I Am” 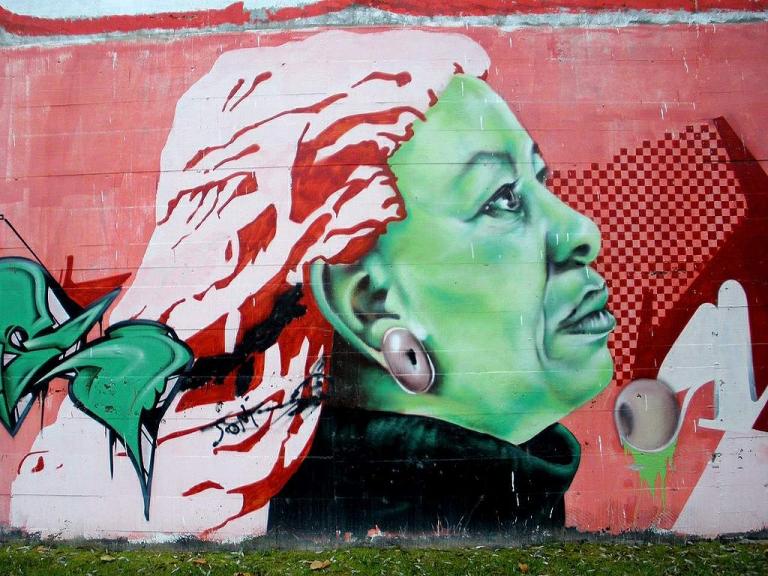 I guess I should explain that this is a town of writers and readers. I came to Iowa City two years ago to study fiction at the Iowa Writers’ Workshop, and while my experience in the program itself was overwhelmingly one of hostile negativity, the city has always been a really wonderful place to be a writer. Everything in this city, even the films, intersect with the reading life. Curiously, it was the same night as one of the Democratic presidential debates, so the crowd was a little attenuated. Still, I was grateful to have gotten a good seat thanks to my friend’s early arrival. I watched as familiar faces came through the door, and ducked low under the sweep of the projector even though it was only displaying a list of donors to the theater and some brightly colored announcements about local programming. People I know from the program and from around town, from the cafes I visit arrived one by one, sometimes in groups. In a curious way, that quiet, dark room in which we were all waiting was a perfect cross-section of the two years I’ve spent in Iowa. There were only about, what, maybe twenty or so people there, but with the exception of maybe five, I had seen or spoken to all of them. We weren’t strangers exactly, but we weren’t the sort of people who could, while waiting to watch the same movie about a revered writer and cultural icon, say hello.

The man to my right leaned to his right and asked his neighbor, “Do you know anything about this author?” “Oh, uhm, I think so. She like. Wrote a book, right? Blue Eyes? Or Songs of Solomon.” I gasped. The man said, “Is she still alive?” “Mmm,” the other person hummed, and then quietly, as if with a shrug, they said, “Oh, I don’t think so, right?” “Oh, I don’t know,” the man said. I wanted to turn to turn to them and said, “She is alive. She is very much alive. How do you not know anything about Toni Morrison? How? Blue Eyes. Get out of here.”

I think of this story today because when I woke up this morning and opened Twitter, the first thing I saw was a news article saying that Toni Morrison had died. I couldn’t believe it. I simply could not believe it. It seemed like one of those entirely made up, impossible things that sometimes appear online. It seemed like something that could never be true by virtue of its mere commonness. Dead was never a word that could ever possibly apply to Toni Morrison. I had been dreading her death for so long that I had ceased to be able to fathom it. And here, on a random, ordinary Tuesday totally torn from any kind of grounding context, I was being told, via the same platform that conjured a joke about 30–50 imaginary feral hogs just 15 hours before, that America’s greatest living novelist was no longer living.

I feel like Toni Morrison is the sort of writer about whom only the foolhardy and the brilliant dare to speak. It seems impossible to sum up not only her work but what her work has meant to us because it is impossible. She cannot be summed up. She cannot be summarized. To summarize her is to miss the point entirely. There is no superlative that can capture it. It’s like trying to describe the sun by looking at it. You can’t.

But here is one concrete way she changed my life. There was a time—when I was an undergraduate and all the years before that—when I let other people dictate the terms of my work and my life. What I mean is that I let other people’s concerns shape the concerns of my stories. When my white friends told me that I should only write real stories about real people, about straight, white people, I listened. I only wrote stories about white men and their white male feelings. And when I dared to write about queer love or queer friendship, the determining gaze was always the white, heterosexual one. That is, my characters suffered and strived for the approval of their families and friends. Every part of their lives was dictated by a set of values determined by the culture in which I was embedded. And I didn’t recognize this as a problem until I encountered the classic 1990 interview in which the following exchange between Bill Moyers and Toni Morrison unfolds:

BILL MOYERS: I don’t mean this to be a trick question, it just occurs to me, though, is it conceivable that you could write a novel in which blacks are not center stage?

TONI MORRISON: I will, but I won’t identify them as such. That’s the difference. […]

I think when I was younger (and in previous essays on the topic), what struck me about this exchange was Morrison’s response to the question at hand. But it was only later that I realized that she was doing what she always did best: answering the question that was not asked. As in, who was Bill Moyers to ask her this question, a question that would never be put to a white author. I think Morrison later called this a sociological question rather than a creative or artistic one. It had never occurred to me that my work could do anything other than seek to answer the sociological questions that swim uppermost to the mind of a white reader’s mind in response to my work. I had just accepted a kind of narrative of myself that was not made by me or people like me, but had been handed out like cheap, bad food in a cafeteria line.

That’s the magic of Toni Morrison. Once you read her, the world is never the same. It’s deeper, brighter, darker, more beautiful and terrible than you could ever imagine. Her work opens the world and ushers you out into it. She resurfaced the very texture and nature of my imagination and what I could conceive of as possible for writing and for art, for life.

I’ll end with my favorite line from Sula, and one of my favorite lines from all of American literature, one I think about every day: “It is sheer good fortune to miss somebody long before they leave you.”

Pick up Sula or Song of Solomon today. Spend some time in the company of real, true greatness. We were lucky to have her, to still have her, because she lives in her work, and in the world she made possible.

Deconstructing the death of the only Black character in “Possessor”

“Give My Love to the Savages” is Satire About Black Masculinity

Chris Stuck's short story collection blends absurdism with realism to tackle identity, racism, and being adrift in the world