Homosexuality and childhood make for strange but necessary bedfellows. To talk about queer children is to enter into decidedly prickly territory. Far right fears of homosexuality are couched in pleas to save the children, while “It Gets Better” campaigns insist on drawing a straight line between hormonal teenagers experimenting with same-sex desire and well-adjusted gay men. Amidst all of this emerges the figure of the queer child, at once a retroactively created image (i.e. “I’ve always known since I was a kid”) and a seemingly conceptual impossibility (what does it mean, after all, to talk about sexual orientation before puberty?). Justin Torres’s novel We The Animals and its film adaptation refuse to dance around such a debate. Instead, the semi-autobiographical story offers a portrait of a young Latino boy exploring his sense of self and coming to terms with how different he is from his older brothers, his abusive father, and other boys he knows.

Torres’s young queer boy is the latest of a budding roster of kids in contemporary literature and cinema that focus on what queer identity looks like before sexual maturity. From Alison Bechdel’s lesbian childhood in the graphic novel turned Broadway musical phenomenon Fun Home to Jeffrey Eugenides’ intersex child protagonist in Middlesex, from Pedro Almodóvar’s queer noir about abused young boys La mala educación to Moonlight’s take on a bullied black boy in Miami, 21st century artists have finally let go of treating gender and sexual identities in children as a taboo. What makes We The Animals such a fascinating addition to this budding canon is that it doesn’t frame such childhood explorations of queerness in terms of adult identities. We never meet the grown man that this young boy becomes.

The novel, for example, opens with an epigraph about the wildness of young boys. “Now a boy is of all wild beasts the most difficult to manage,” Plato informs us. “For by how much the more he has the fountain of prudence not yet fitted up, he becomes crafty and keen, and the most insolent of beasts.” That’s why it is necessary to bind him with many chains. Like all good epigraphs, the Plato quote both frames and illuminates the story that’s to follow, where Torres will introduce us to three wild young boys who must grapple with the chains that shackle them. Our guide is a six year-old boy who, despite wanting to anchor himself in the first person plural of the novel’s title, finds himself slowly veering away from his two older siblings. He knows there’s something markedly different about him and that self-awareness makes him a crafty narrator of his own story, even when the events he describes rankle precisely because he’s so nonchalant about them — he’s inviting us into his world and violence is sudden but not uncommon.

We The Animals is that rare book that tells the story of childhood trauma not (just) from the vantage point of hindsight, but with the immediacy of childlike awe. Torres’s language captures the wide-eyed wonder of kids all the while hinting at the dangers they may not even recognize as such. Take the opening lines of the book: “We wanted more. We knocked the butt ends of our forks against the table, tapped our spoons against our empty bowls; we were hungry.” Invoking the rhythm of a nursery rhyme — this could very well be the first lines of a Dr. Seuss book — this percussive chant immediately keys us into the unruly world of the “animals” of the novel’s title. You can hear the loudness of it all (director Jeremiah Zagar makes this all too central in his filmed adaptation; the same lines open the film in voice-over). But beneath the raucousness of these boys is the tragedy that undergirds their everyday life: their hunger isn’t (just) a metaphor. These are growing boys who spend their afternoons raiding the fridge and later still neighboring yards in search of food, any food. Their parents, we soon learn, are too busy, too indifferent, too broken, too drunk to take care of them. It’s no coincidence that “Paps” (Raúl Castillo) bears a tattoo that reads “mala crianza” (“bad parenting”).

This is where Zagar’s adaptation improves on Torres’s slim tome, especially when it comes to exploring the book’s protagonist and his precocious sexual awakening. By making Jonah (Evan Rosado) older than he is at the start of the novel (he’s about to turn seven — or “six plus one,” as Ma tells him), yet younger than he is at the end (where his teenage hormones lead him to cruise at a truck stop), We The Animals makes the boy’s sexual curiosity a key part of his childhood. On screen, his desires feel both lurid and chaste: he’s enamored with a loner teenager he meets who shows him and his brothers porn; he finds his father terrifying yet all too alluring; he knows his sensitivity has no place in the macho masculine world of his Puerto Rican father’s household. But he also has no language for it.

Torres’s narrator is an observer, an audience, the kind of boy who thinks he’ll blend in better if he disappears into the background. Only, as he soon discovers, his roving eyes require him to jot down what he sees. He spend his sleepless nights chronicling in a secret notebook all that takes place in the “dreamtime” world he and his brothers have conjured up in their living room and backyard. In Torres’s book, the prose we’re reading (“Paps stood to piss and we saw his stout, fleshy dick, the darkness of his skin down there and the strong jet of urine, long and loud and pungent”) has the confessional tone of a young boy’s diary-like entries, even as it remains unclear whether those entries are exactly what we’re reading.

In the film, Zagar captures that hyper-awareness of everything around Jonah — not to mention his artistic drive to re-create what he sees — in a series of animated sequences that spring out of doodles Jonah draws as companion pieces to his writing. We see him start to fill that notebook, tucked away under the mattress he shares with his two brothers, with drawings that further depict what’s going on his head. Furious red squiggles pour out of black and white stick figures, bloody encounters between Ma and Paps turned into near-abstract sketches; blue crayon scratches become the lake where he feared he was gonna drown earlier that summer; increasingly R-rated content (all very phallic, of course) begins to take shape as Jonah grapples with what his shameful desires say about him. Childlike play is intimately tied to his self-discovery.

‘Love, Simon‘ Makes Being a Gay Teen Seem Normal—And That’s Where It Fails

An open letter to the coming-out story of the moment, about the ways it lets us down 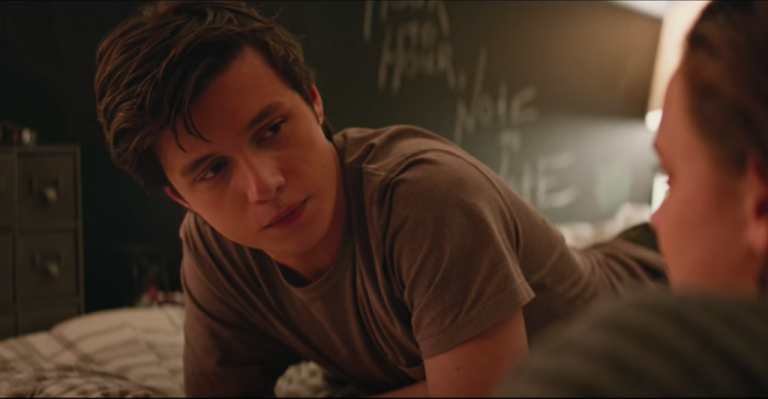 Those drawings work to clue audiences into how Jonah’s introversion is a self-defense mechanism. “You’re fucked up,” he’s told in the book by his brother. “What the fuck is wrong with you?” he’s asked in the film. Seeing him avert his furtive eyes to avoid watching his father straddle his mother in the bathroom, or catching himself staring too long at the teenager’s lips as they share a beer together, his move inward is a way to wall himself in. Shot as a series of intimate home movies that risk showing too much of the family dynamics at work in this working class household, the film makes us wince every time the camera lingers too long on Jonah’s probing eyes, making both his and our gaze feel complicit in the secret he’s hiding.

Queer kids often telegraph the very thing they’re trying to hide; the thing they struggle to suppress, to ignore. “They smelled my difference, my sharp, sad, pansy scent,” Torres’s narrator tells us. Such language, mixing self-awareness (“sad”) with borrowed bullying language (“pansy”), captures precisely why We The Animals marks new territory when it comes to telling stories for and about queer kids. There’s a bleak whimsy in what’s ostensibly a fictionalized version of the author’s own fractured childhood. And in Zagar’s hands Torres’s story pulses with kinetic energy, reminding us that young queer boys are all but required to be painfully aware of the scent they give off and which they can never shake off, only learn to embrace. Refusing to imagine who an older Jonah will be, and in turn making that image immaterial when it comes to telling his story, We The Animals offers its most radical proposition: it crystallizes queer childhood as its own entity, not as prologue nor as flashback.

In our first “Can Writing Be Taught?” feature, we ask the instructor of Catapult’s novel generator course all our burning questions

Everything I Know About Queer Community I Learned from Swamp Thing

As a child with no access to queer or trans stories, I turned to "The Return of the Swamp Thing" for the message that I would be okay

‘Jaws’ is a Film Full of Queer Intimacy You Never Noticed