What Happens When Your Grandma Turns Into a Bird

Entering the odd and exquisitely nonlinear world Marie-Helene Bertino’s Parakeet dislocates over and over. The novel begins with the unnamed bride protagonist talking to her deceased grandmother who appears to her in the form of a parakeet. Grandmother as parakeet tells her not to get married and to go find her missing brother. She also demands an explanation for what the internet is, and defecates all over the bride’s wedding dress.

With incredible sleight of prose, Bertino moves through the chronology of the bride’s life. Time slips and slides, and the bride’s mind fragments as she moves closer to her moment at the altar. On her way there, she deals with an old friendship, seeks out her brother who’s written a play based on her childhood, also called Parakeet, and inhabits the physical body of her own mother. The bride has suffered an injury but the exact nature of her trauma and its full revelation comes later and startles.

I spoke to Bertino about putting birds through a narrative prism, deconstructing femininity, how time moves when you are traumatized, and what being ambiguous and opaque to others means in America.

J.R. Ramakrishnan: I tried to explain to a friend what your book is about and couldn’t quite do it because so much goes on!

Can we talk about the parakeet as a symbol? It appears as the grandmother of the bride and then throughout the book. I love the part when the bride says, “Every time I saw one as a child was a holiday.”

Grandmother Is Gone but at Least She’s a Bird Now 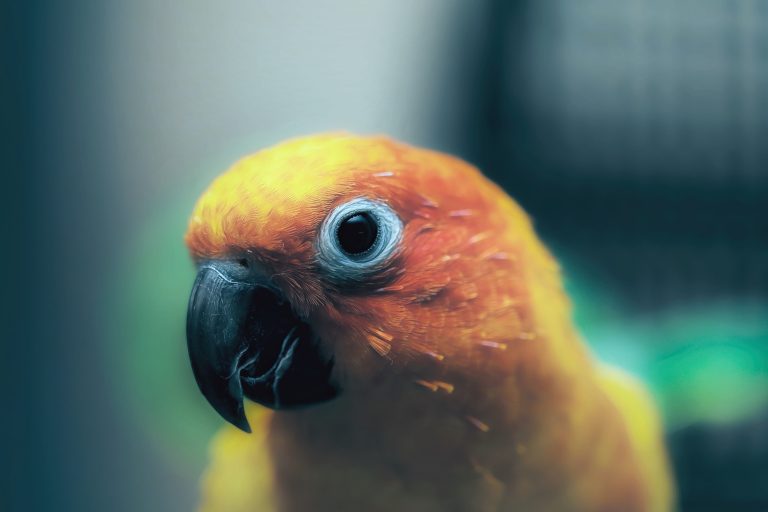 From then on, the bird refracts. I very deliberately did this—it was almost as if I put the bird through a crystal, and then wrote all the refractions that were reflected on to the wall. The bird then becomes an idea of immigrations, and of accidental immigrants. The bird becomes the title of a play, in which there are other birds, that is meant to signify a cherished childhood stuffed animal and memory. Where we find out how the bride has been injured, the parakeet is a distraction, a colorful distraction, from a very, very violent scene.

I challenged myself to use the metaphor in as many different ways as I could. The very last occurs in the very last three words that book has been hurtling towards the entire time—without even me really realizing it, to be honest. I wrote those words and realized, oh, it is about connection. This bird is meant to achieve for her this intimate connection has been unable to achieve for herself.

JRR: “Refraction” was exactly the word that came to me when I thought about what you do with time and how you move through it in the book. When the bride’s at the play, she thinks, “There is no memory in a play. A play is always present tense. I am newly injured in real time.” Could you talk about how you thought about time?

MHB: Time is very much meant to be a supportive infrastructure for the trauma in the book, so that it reflects what happens to your understanding of time when you have experienced an injury and trauma like the bride’s.

Anytime you make a mark on a page, I don’t care if you write the letter “A,” if you write a title, you write a paragraph, you are manipulating time, right? And what you choose to fill in on a page and what you choose to leave blank is a negative space. These are all units of time. I very much wanted to do to time, to use everything I could possibly think of, on a page with time, to help tell the story of time, of how sometimes it reverses, rewinds, moves faster and moves slower, the way it does when you’re in a catastrophic incident, and the way you do for every moment after that incident. The trauma forever changes you. Anytime you remember something, you re-experience it and time works in that same way on you again. It was a literal representation of how time begins to move independent of logic.

JRR: The whole book moves towards the bride’s wedding, which is obviously a heteronormative marker of femininity. You have multiple meditations of femininity including the bride inhabiting her mother’s body and her missing brother who has transitioned to being a woman.

MHB: You know, just like the idea of the bird is being refracted, so is the idea of so-called femininity. The world tells you exactly what you are supposed to think a woman is. You are supposed to look like this. You are supposed to want to be this. Personally this has been extraordinarily frustrating throughout my life as I know it’s been for many, many women I know—and for no one more than transgendered folks. I just really wanted to deconstruct the conceits of femininity and refused to have the bride match the expected archetypes. My ideals of beauty have never matched what the world has told me they should be and perhaps that’s because I’m Basque and Italian, and culturally I grew up kind of different from the conventional American ideals. I’m not sure. It was just so important to me to say, actually here’s a strange-looking brown woman who doesn’t want to get married. She’s kind of mean sometimes, and loving at other times. She is also just as valid, feminine-wise as, as anyone else. And then obviously the Simone character was the PhD level of that idea today.

JRR: How did you create Simone?

MHB: So you get to know very quickly how limiting languages is. I knew when I was placing Simone in the bride’s literal point of view, that that could very easily be a situation of subjugation. The first thing I did was figure out this snag of craft, allowing Simone to tell her own story, for example. I gave her this monologue so that she could literally tell the bride in her own words what her story was. And then I had to make sure that the novel itself didn’t become a tool of oppression and didn’t itself do what they call dead naming. So as soon as Simone arrives, so to speak, in the text, there is no longer a character named Tom. The only time the character of Tom appears again is in memory.

I worked on these ideas with a sensitivity reader, a very, very smart professor of English, who is a trans woman, Grace Lavery. I asked her if I could have Tom appear in memory in the latter half of the book, without dead naming. We talked about how in a flashback that would work and she said if the bride is having a memory of Tom, that’s okay. It would be different if she were referring to him in the present tense and the present day scene. So speaking of time, I had to make sure that as I was going through all of these flashbacks in time portals that I wasn’t also having it act as an oppressive tool. It was fascinating to get really into the linguistics of how the present to her most respectfully.

JRR: The bride is ethnically ambiguous. The grandmother (the parakeet) says “kind of” when the bride says, “We’re white.” The bride then goes on to say: “We’re considered white now.” The bride’s great-grandfather is Roma and you have her mother-in-law say a horrible slur about her background towards the end of the novel. Would you talk about this? Do you have Roma roots as well?

MHB: Yeah, that is a bit of my own personal experience taken directly from my family. I read as ethnically ambiguous and have been approached several times in my life, sometimes aggressively about what I am. It’s always like, what are you? And not: who are you? Earlier this year,  in Montana, an older, white drunk man approached me and demanded to know what I am. When I asked him to leave me alone, he became aggressive. It seems to really infuriate people. When a) they don’t know who you are, don’t know what you are, and b) when you are in some way opaque to them. How dare you show up in my line of vision and have me not know, immediately, everything I think I would know about you?

This has happened to me enough in my life, that it’s all over my writing, and more and more with each thing I write. I think that many times you write what you wrestle with. It’s hard for me to love America as much as I do, and love traveling around America as much as I do, and also have to constantly be reminded how I don’t belong in towns like Missoula, Montana, and how it can be when that experience is erased by seemingly well-meaning white progressives. The restaurant where that verbal assault happened was owned by a woman who was not there that night but wrote me a letter the following week to tell me that if it makes me feel any better, what that man did was not racist. In my own work, I get to explore these themes and work through them a little. I gave that experience to the bride because I think it’s an important American one.

I am sometimes perceived as ethnically ambiguous, which sometimes leads to questions and confrontations like this one. But that aside, I don’t claim to be anything other than white. We actually are not sure about [the Roma roots] as there’s estrangement and liars on both sides of the family. There is a lot of alienation and a lot is not altogether known from that part from the Basque region. And that’s all I can say really—that’s about as nuanced as it is. It’s very difficult to explain when most people just see you and want to make a snap judgment of what you are.

How to Sell a Bra in Five Minutes or Less

"Daughter of Retail" from Father Guards the Sheep by Sari Rosenblatt, recommended by Tom Drury

Real magical stories to show us, individually and collectively, different ways to create a new world