How voice actors can accurately represent the languages they perform

Over the last decade there has been a push towards better representation in visual media. While movies and television have provided more examples of non-white characters in key roles, there has also been an uptick in linguistic diversity in film. Movies like Lulu Wang’s The Farewell, which slips between Mandarin and English, and the more recent hit Minari, which is mostly in Korean, provide meaningful examples of what it feels like for many to not only be seen on screen, but also heard.

Language is a crucial element of media representation that isn’t initially obvious for those from a mostly monolingual culture—since there is an expectation that everyone should speak English in the United States, for example, there are fewer instances of characters moving between multiple languages, even though many of us do so on a daily basis. If anything, moments of non-English dialogue are thrown in as an afterthought. As someone who is a heritage speaker of Japanese, I cannot begin to count the number of times I have been jolted out of an otherwise immersive story because of a character speaking Japanese in a way that is utterly incomprehensible. The disappointment is sharper because there are so few instances that I hear myself represented and, when I do, the language is often treated with less care. Nuances—such as regional dialects and switching between casual or honorific language depending on who you are speaking to—are flattened or removed altogether. Many believe Japanese is a monolithic language, that there is one way to speak it, when in fact it is a rich language made up of numerous dialects. Yet when I do hear my Japanese spoken on screen, the Japanese spoken in and around Osaka, I feel a thrill run through me, the joy of recognition.

While linguistic representation is becoming more important in film, the conversation around representation and inclusion, particularly when it comes to language, has also appeared in the realm of audiobook narration. As the audiobook relies solely on a narrator’s voice, there is much more linguistically at stake, particularly when it comes to books with multilingual characters. According to the Audio Publishers Association’s Sales Survey, audiobook revenue reached $1.3 billion in 2020. There is keen interest in which books are being turned into audiobooks and, more importantly, who will do the reading.

I asked Angeline Boulley, author of the novel The Firekeeper’s Daughter, whether she had any concerns about having her story, a thrilling crime novel that centers on a Native American female character blending traditional Ojibwe medicine with chemistry to solve a mystery, turned into an audiobook. Boulley had grown up listening to audiobooks on tape and admitted to having some trepidation as someone who had long loved the format. However, when she listened to narrator audition samples, her concerns faded. “The instant I heard Isabella Star LaBlanc’s voice, I knew she was my top choice!” Boulley said, “She sounded exactly the way Daunis sounds in my head. I also loved her different voices—especially for Granny June. Isabella got the cadences exactly right.” Boulley’s enthusiasm around finding the perfect voice for her characters felt similar to the excitement I get whenever I hear my dialect spoken, that same spark of recognition in hearing something that sounds like those you love.

La Blanc’s background is in stage and screen acting, and her work on The Firekeeper’s Daughter is her first foray into audiobook narration. Knowing that language played an important role in the story, I asked LaBlanc how she navigated the use of Ojibwe.

“I felt an immense responsibility to do it right, since I knew for most listeners this would be their first experience hearing Ojibwe spoken.” LaBlanc said. She worked with Boulley herself, combed through online resources, and spoke to a few Ojibwe friends before heading into the studio to ensure her speech was not only accurate, but felt real to the listener. “I wanted the Ojibwe to sound just as alive as the English,” she said, “It was a challenge, but I was so honored to be trusted with it.”

The care LaBlanc put in to her performance was mirrored in the responses I got from the other audiobook narrators I spoke to. Natalie Naudus, an Asian American narrator who comes from a vocal performance and opera background, detailed her own approach to getting dialect and language right. For new dialects, Naudus describes careful study of documentaries and interviews, developing charts outlining the vowel and consonant changes, as well as finding a fluent speaker to read lines for her to use as she rehearses. When she needs to narrate non-English languages she draws both from her training in Opera and from her own experience growing up Asian American. Naudus said, “I’ve had quite a bit of training in languages from my Opera days and growing up attending Chinese school on Sundays, so I’m good at emulating sounds.”

Avi Roque, a trans Latinx narrator with a background in both theatre and on-camera work, emphasized the importance of preparing for a role. Like Naudus, Roque highlighted their approach to checking words they might be unfamiliar with or recording themselves shifting between English and Spanish, to get the sounds in their ear. When moving between different characters, “I never want to be offensive or too much of a caricature,” they said, “I want to take care of these characters and be respectful and honest.”

All three narrators that I spoke to understood the importance of blending other languages with English and made sure to prepare accordingly for their recordings, whether they were already intimately familiar with the language or whether they needed to practice a slightly different dialect.

In the movie’s “Konglish,” I recognize my family, especially my mother’s quest to feel comfortable in America 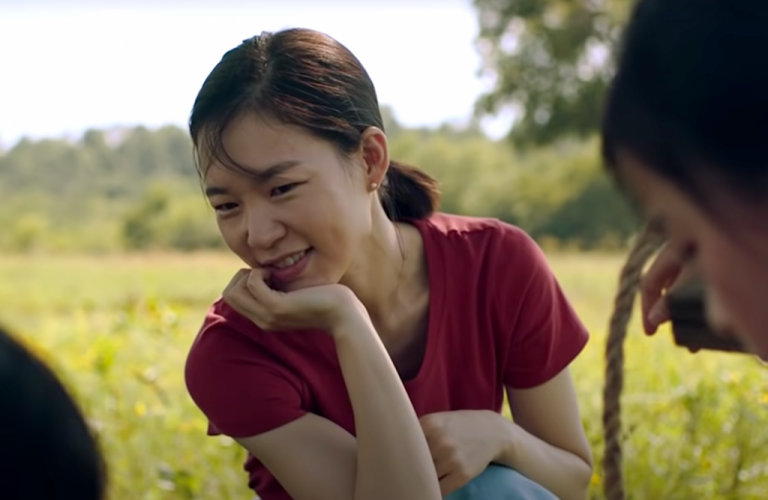 The approaches that LaBlanc, Naudus, and Roque bring to their narration highlight the intense work that goes into producing media that accurately, believably brings multiple language to life—and how language can make a listener’s experience even more immersive when it is done well. Meaningful representation always takes effort and intention; these narrators are able to capture diverse experiences through linguistic representation, not only because of their backgrounds, but because they want to and make the representation a priority. There is a sense of responsibility, an earnest desire to bring these stories to life in a way that puts many other mainstream, big budget productions to shame.

As the number of multilingual individuals increases and as the demand for more media representation continues to climb, there is a true opportunity for audiobooks to flesh out what meaningful media representation means. For so long representation has stood simply for visual representation, seeing someone who looks like you or your loved ones on the screen. But as the success of both The Farewell and Minari indicate, there is something just as powerful about hearing someone who sounds like you and your loved ones. Narrators like LaBlanc, Naudus, and Roque bring characters to life for those whose identities are linked by language, creating an aural experience that reflects the voices that have been shut out of media for so long. The hope is that producers will continue to tap into the pool of performers from diverse backgrounds, to continue to provide voices and languages in all genres that make listeners feel that characters like them are worth writing about and are worth performing for a wide audience.

7 Thrillers About the Dark Side of Academia

7 Books About Life in Queens by Writers of Color

Bushra Rehman, author of "Roses in the Mouth of a Lion," recommends stories set in the most diverse neighborhood in the world

A Hotshot South Asian Professor is Outed as White, Cue the Twitter Rampage

Mithu Sanyal, author of "Identitti," on using cultural appropriation to tell the story of being mixed race in Germany

7 Genre-Defying Books by Women of Color