A Nun’s Awakening in a Halfway House

Claire Luchette, author of "Agatha of Little Neon", on rule-following as a means of hiding pain and Fleabag's Hot Priest

Retrospection about nuns is in.

Claire Luchette‘s novel Agatha of Little Neon packs a suckerpunch beyond its bold pink cover. At first it is unassuming, as a woman in a habit can be. The story opens with four sisters who are being removed from their home near Buffalo to be put in charge of running a halfway house in Rhode Island, Little Neon. The four blend together at first, having spent the last nine years in unison. However, after the move, the youngest nun Agatha is slowly peeled from the comfort of anonymity and constancy and into interrogating her own wants.

Tension builds throughout this novel in vignettes. At the start, when the sisters prepare to leave their home of nine years, they pray in the front pew and Agatha recounts the grandiose beauty of the church:

“There was nothing new for us in that basilica, only things that had always been there, and though we could not admit it to each other, that’s what we wanted, too: to always be there, in the place we’d become sisters. Remain, remain, remain.”

Then quickly they are transported to another world of graffiti of men’s genitalia, discount groceries, and a halfway home painted neon green. And inside the home are people that the Church says, ”need God and prayer and mercy.” But it doesn’t seem like enough. Not for the people who have tangible needs and hardships at odds with the Church’s creed. For Agatha, recognizing that gap comes with the larger stake of ending the bond she has with her fellow sisters. If she leaves, she is alone.

I am a generation removed from Catholicism. I was baptized at seven at the behest of my great aunt, who was also my father’s Godmother. My mother was taught by her grandmother that only a priest could truly interpret the Bible. But, my home is littered with crosses and angels. I suppressed my sexuality until I was in college because I was afraid of disappointing my loved ones. After seeing many family members struggle with addiction, I’ve seen how the church is one of the only places offering support.

I talked on the phone with Claire Luchette about a quiet, queer interior, the rare beauty of Fleabag season two, and how to write men in a story of sisterhood.

Alex Juarez: One of the main things that I immediately noticed and that stuck with me the entire book is that it’s such a relationship-oriented story. Between the sisters, between the sisters and Mother Roberta, between the Neons, and even the girls at school. But at the same time, so much of the book is focused solely on Agatha and her interior. How did you manage to balance which parts of the story were about groups and which were about the singular?

A Practical Guide to Becoming a Nun 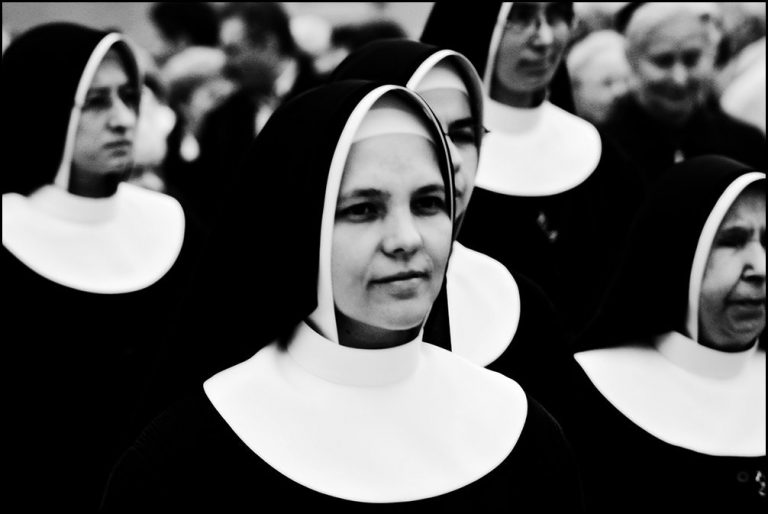 Claire Luchette: The story started as an exploration of group dynamics. I was writing early drafts through the first person plural, but that didn’t really allow me to get into any of the interesting stuff that goes on between groups of people and like the strange power dynamics that exist in any group. And so Agatha came much later in the process. Once I was able to picture this narrator and think about her role in this group, you know what she wants for herself or what she lacks for herself, that made it much easier to kind of figure out what was at stake for her in this story. Putting her in this situation in Rhode Island in which she is totally out of her depth, I’m just far more interested in populated stories in which a lot of people show up and kind of filter in and out of the world than I am any like one character or portrait.

AJ: ​​I feel like there’s been a big increase in like stories that are very much about one lone woman like My Year of Rest and Relaxation where she’s just in her apartment and there’s two other characters.

CL: Right? Yeah. No, it’s so true. And Rachel Cusk, for me, was a big inspiration as to how you can turn that gaze outward and put your character in the world and have them bump up against other people in it rather than just giving us a static situation. That’s way more interesting to me.

AJ: I really enjoyed the societal expectations that you were addressing about being a nun. You see that in the scene with the truck driver where he’s initially very aggressive but when he sees that they’re sisters and then he apologizes and leaves. And simultaneously having the sisters be caretakers for this group of addicts that are almost all older than them.

CL: I’m so interested in caretaking as a story concept. I think what’s interesting to me about the nuns is that they kind of exist in their own world and determine their own rules, but they’re also still liable to this extremely stringent and regimented, broader world of the Catholic Church. So they can’t really excuse themselves from clericalism and the idea that they are of a different moral sphere than everyone else. But in this actual vocation in which they’re taking care of other people, and I think they find that physically demarking themselves and culturally and morally demarking themselves isn’t to anyone’s benefit and that it really gets in the way of the work that they’re trying to do.

AJ: Sexuality is mentioned throughout the book, but often in like very tiny revealing snippets. And I was incredibly charmed by how much you learned from these short sentences here and there. You mentioned that Agatha was a later addition, but since you thought of Agatha, was she always queer?

CL: Yes. I actually met a nun while I was researching this book. And the sister said, “I’m a lesbian, but it’s just something that I have to do away with.” And that’s self-knowledge I found really fascinating. And I wanted to figure out what it meant for someone to hold that truth in their head but live without letting it be true. Agatha was always clear in my head, and but I think like for me, the hard part in writing this book was figuring out ways to make it clear that her queerness is palpable and present, but not to be homophobic in the way that I wrote about repression.

AJ: Have you seen season two of Fleabag, The L Word: Generation Q, or Midnight Mass?

CL: I’ve seen season two of Fleabag. I have not seen the L Word or Midnight Mass.

AJ: I feel like there’s been a big spike in three dimensional and devout clergymen, who are also very queer-accepting friendly, loving figures. And I don’t seem to remember that happening prior to a few years ago. Do you have any thoughts on like the rise of queer friendly figures on-screen, like Catholic or otherwise?

CL: Yeah, I love this question. I remember watching Sex and the City, and Samantha has a fling with a priest. That was the first time that I saw a priest breaking the rules on screen. I think some of it has to do with the quote unquote Cool Pope, and what Pope Francis seemed to represent to a lot of progressive Catholics. It seemed like he was going to bring about all this change. But I think people are finding that like no one pope, it sounds ridiculous but no one pope can change the Church.

I think what’s really interesting to me about the Hot Priest is he’s a really good priest. He sees himself as an instrument of God. He wants to bring God to the people of the world and the Church. He’s not someone who sees himself above the lay people or beyond reproach in some way. But we see that clericalism still hurts him because he’s forced to desexualize himself. And yeah, I think anytime you have a character who exists inside a hierarchy of power, that character automatically becomes a shorthand almost for readers or viewers, right? It signifies something. And I think lately, the role of a clergyman in a story signifies something really complicated and a lot more interesting than maybe in decades past.

AJ: It was really interesting to see the role of men in the story, especially because it’s very much a tale of sisterhood. And the men in the story are the priests and the Fathers who are less than stellar: how they weaponize power over the sisters for being women or like the principal at the school. And then you have the Neons who are such a vital part of the story. And very quickly the Neons are only men who are incredibly tragic and very human characters. Was it important to you to give the sympathetic role to men outside of the church?

CL: In earlier drafts, the men in the story were either extremely evil or extremely wounded, and for whatever reason, could not strike a balance between the two. I wanted to draw a line between the emotional stuntedness of the men of the church and the ways that the men that live in Little Neon aren’t afforded the same ways of doing away with their problems. There’s no rule for them to cling to as a means of hiding their pain.

I’m sure that there exist some priests that that are good priests, like the Hot Priest, but I’ve never gotten to know them or I’ve never met them, because so many of my relationships with clergy have been with sisters. They are the real workhorses of the church and the people who are bringing God to the suffering. And so I wanted to show that in the story, which required me to keep the man of the church at a bit of a remove.

I’ve Been Looking Everywhere for Me

“Carry Me Home, Sisters of St. Joseph” by Marie-Helene Bertino